Petitioning Attorney General Lynch and President Obama: Exonerate our mother, Ethel Rosenberg. Our mother was not a spy, and her execution was wrongful. Her conviction was based on perjured testimony and prosecutorial and judicial misconduct. The charges against our mother and the threat of the death penalty were meant to intimidate her and our father into cooperating. Sign te petition (below) - 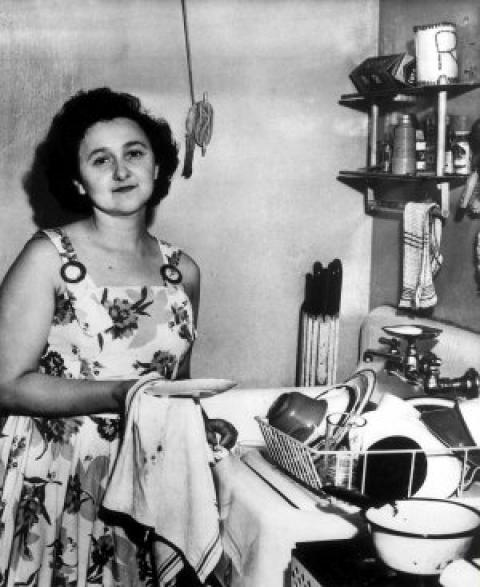 Ethel Rosenberg,Rosenberg Fund for Children
Our parents, Ethel and Julius Rosenberg, were executed on June 19, 1953 during the anti-communist hysteria of the Cold War Era. They had been convicted of conspiracy to commit espionage, in what was called "the crime of the century." We were six and 10 years old when they were killed.
Our mother was not a spy, and her execution was wrongful. Her conviction was based on perjured testimony and prosecutorial and judicial misconduct. The charges against our mother and the threat of the death penalty were meant to intimidate her and our father into cooperating. The U.S. government wanted Julius to falsely confess to passing "the secret of the atomic bomb" to the Soviet Union, and name others involved.
Their trial took place during a time of widespread panic about communism. The sentencing judge went so far as to blame our parents for the Korean War.[i] In denying clemency, President Eisenhower accused them of causing future nuclear wars.[ii] These outrageous statements and our parents' execution helped fuel a dangerous climate of fear and intolerance in our country which permitted political opportunists like Senator Joseph McCarthy to poison our society. Today, we face a similar climate of hatred which targets immigrants, Muslims, LGBTQI individuals and others.
A formal acknowledgement of the wrong done to our mother and our family will help prevent similar injustices in the future. A healthy democracy requires that the government acknowledge and correct its transgressions. The government cannot return our mother to her loving family. But it can admit this miscarriage of justice.
Please, join us in calling on Attorney General Lynch and President Obama to formally exonerate Ethel Rosenberg before they leave office. More than 60 years after her unjust conviction and execution, now is the time to clear her good name.
Why Ethel's Execution Was Wrongful:
The grand jury testimony of a chief prosecution witness against our parents, our mother's brother, David Greenglass, was made public recently. This material - along with previously released testimony and other records - proves that our mother was prosecuted simply for refusing to turn on our father.
The evidence presented against our mother at her trial consisted of testimony by David, and his wife, Ruth. They stated that Ethel took part in two meetings between the Rosenbergs and Greenglasses in 1945 (including one at which David gave Julius a sketch of a cross-section of the bomb), and that our mother's participation included typing notes. Our mother's conviction hinged on these alleged actions of hers.
The record now refutes these claims. David's grand jury testimony made no mention of Ethel's presence at either meeting, much less her typing. Instead, responding to questions about spying, David told the grand jury: "My sister has never spoken to me about this subject," and, "I never spoke to my sister about this at all."[iii]
Despite this testimony, prosecutors developed a plan to use our mother against our father. An assistant attorney general told the F.B.I. that there was "insufficient evidence" to charge Ethel, but that she could be used "as a lever against her husband."[iv] Furthermore, a month before the trial, a prosecutor told a congressional committee: "The case is not too strong against Mrs. Rosenberg. But for the purpose of acting as a deterrent, I think it is very important that she be convicted too, and given a stiff sentence."[v]
At our parents' trial, David contradicted his sworn grand jury testimony and suddenly implicated our mother in the alleged spy ring by describing Ethel's presence at the meetings. Decades later, David admitted on national television that this testimony was a lie.[vi]  Therefore, Ethel's conviction - which hinged on this story - was wrongful.
Based on these revelations, on September 28th, 2015 (what would have been our mother's 100th birthday), 13 Members of the New York City Council and the Manhattan Borough President issued proclamations declaring that our mother was wrongfully executed.[vii] This was a step towards acknowledging a terrible injustice. Now, it is time for the federal government to do the same.
Sign the petition at www.rfc.org/ethel
[Michael Meeropol is professor emeritus of economics at Western New England University and editor of "The Rosenberg Letters." Robert Meeropol is the founder of the Rosenberg Fund for Children and author of "An Execution in the Family." They are the authors of "We Are Your Sons."]
_____
[i] Judge Kaufman's Statement Upon Sentencing the Rosenbergs for Atomic Espionage Digital History ID 1118, Author:   Judge Irving Kaufman, Date:1951.
[ii] "Eisenhower Statement on Spies," New York Times, Feb. 12, 1953
[iii] http://nsarchive.gwu.edu/news/20150714-Rosenberg-spy-case-Greenglass-testimo ny/
[iv] (#151g) Belmont to Ladd, July 17, 1950, JR HQ 188. See https://vault.fbi.gov/rosenberg-case/julius-and-ethel-rosenberg/julius-and-e thel-rosenberg-part-5
[v] File #3201, US Joint Congressional Committee on Atomic Energy, February 8, 1951, p.6. AEC Documents.
[vi]  http://www.cbsnews.com/news/cold-war-colder-brother/, aired December 5, 2001.
[vii] http://www.rfc.org/pressreleases; full proclamations and http://www.rfc.org/sites/rfc.org/files/ethel_rosenberg_day_of_justice_in_the _borough_of_manhattan_text_09.28.15.pdf 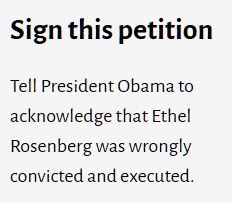