'Let me be clear: No amount of offensive remarks will stop me from standing up to House Republicans who are bought and paid for by the big banks.' 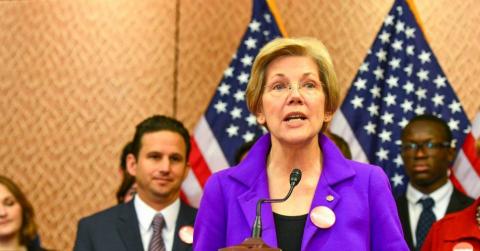 With his "offensive, sexist, and out-of-line" remarks this week about Sen. Elizabeth Warren (D-Mass.), whom he likened to Darth Vader, Republican Congressman Blaine Luetkemeyer (R-Mo.) awakened the Force.

In a speech before the American Bankers Association on Wednesday, Leutkemeyer said Warren—a leading voice for Wall Street regulation—was the "Darth Vader of the financial services world" and said bankers should find a way to "neuter" her.

Warren responded Thursday in a blog post titled, "I won't be neutered."

"I've always seen myself more as a Princess Leia-type (a senator and Resistance general who, unlike the guys, is never even remotely tempted by the dark side)," she wrote. "Clearly the Force is not strong with Congressman Luetkemeyer (maybe he’s a Trekkie)."

Of the congressman's remarks, Warren wondered: "Why would he go out of his way to say something so sexist and offensive? Is he hostile to all women? Clueless? Afraid?"

Ultimately, she came to the following conclusion: "This is all about money."

"Luetkemeyer probably thinks that he’ll make big bucks from his Wall Street friends off of his sexist remarks," Warren wrote.

The congressman—who has received close to a million dollars from big banks, hedge funds, and credit card companies and ranks among the top 10 recipients of campaign contributions from payday and other short-term, high-interest lenders—is a "Wall Street yes-man," she charged, whose insult was "just one more way to earn chits and try to cash in big time with that audience."

"Let me be clear: No amount of offensive remarks will stop me from standing up to House Republicans who are bought and paid for by the big banks," Warren said. "And no amount of name-calling will keep me from fighting for Wall Street reform, for the Consumer Financial Protection Bureau, and for real accountability when the big banks break the law."

She concluded: "They can call me Darth Vader or Voldemort or the Wicked Witch of Massachusetts for all I care—but I won’t be neutered. I won’t be muzzled. And I won’t stop fighting to level the playing field for working families."