Aaron Loeb's new play, Ideation", establishes perfectly the moral conundrum, the slippery slope of the amoral corporate/political project. You don't really know where to draw the line between the past, present and possible future. You only understand that the kind of morality represented by corporate sleaze and groupthink has seeped into areas where "a modest proposal" for killing is readily accepted by political decision-makers. 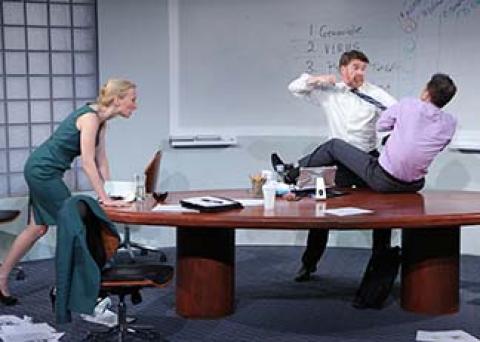 Carrie Paff as Hannah, Michael Ray Wisely as Ted, and Mark Anderson Phillips as Brock.,Photo: Carol Rosegg // The Komisar Scoop
Think of Jonathan Swift's "A Modest Proposal" [1] as if it were designed by corporate consultants figuring out how to dispose of large numbers of people unlucky enough to have contracted a very deadly virus about to go global. Then move to Aaron Loeb's engrossing bizarre, dark play which posits a related idea that couldn't be real. Or could it, in principle? Or the lack of it.
Ideation is the act of coming up with ideas, corporate speak for thinking. The management consultants would be ranged around a cherry wood oval conference table. There would be a large white board, an intern would be sent for coffee, the boss at another location would communicate by speaker phone.
For secret project Senna, the major rules would be 1. No power point, 2. Assume the worst, and 3. No N-word. No, it's not that N-word, it's the other N-word. Consider the system diagram for Collection, Containment, Liquidation and Disposal.
Playwright Loeb's plot idea might seem crazy at first, but that's only if you didn't pay attention to the early remarks of Scooter (Ben Euphrat), a young guy getting his MBA who is there as an intern because his father is on the board.
The team is Brock (Mark Anderson Phillips) a bit obnoxious, Ted (Michael Ray Wisely) insistent, sometimes rattled, Hannah (Carrie Paff) assertive, chic, in very high heels, Sandeep (Jason Kapoor) from India, a bit calmer at the start.
The ensemble of actors is excellent, utterly believable, they inhabit their souls, in some cases very damaged souls. All of them appear willing to sell out whatever souls they ever had. Director Josh Costello leaves no doubt that the events that transpire could be true. 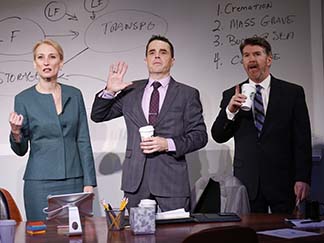 Carrie Paff as Hannah, Mark Anderson Phillips as Brock, and Michael Ray Wisely as Ted.
Photo: Carol Rosegg // The Komisar Scoop
Brock and Ted have just come back from Greece, where they saved money for a client by shifting the cost of maintaining his trucks to the municipality by persuading it that the upkeep should be done by the local government "in the guise of business friendly environment." And with some "modest chargebacks," ie kickbacks.
Brock explains, "So our client saves and the union gets more heads funded by the government borrowing money they can't pay back but, you know, who are they going to call when that blows up in their faces?"
Sandeep points out, "They will see that our client is thriving while they are in debt. But wait a minute. Just a year ago, two, our client was in debt. So, from this, what will they conclude?"
Scooter volunteers, "That you tricked them." Adding, "Brock.you were saying you'd privatize the port. But if there's not enough revenue to justify the new regional maintenance technicians in the first place, isn't that liability just going to catch up with our clients?"
If they could do that with no moral compunctions, what else could they do? How do you go from the scamming inherent in privatization (consultants win, everyone else loses, it happens all the time) to a new project, using the whiteboard to discuss mass killing? 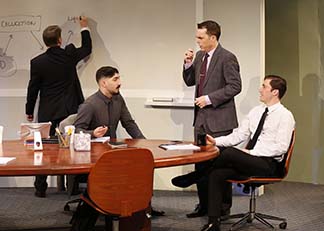 Michael Ray Wisely as Ted, Jason Kapoor as Sandeep, Mark Anderson Phillips as Brock, and Ben Euphrat as Scooter.
Photo: Carol Rosegg // The Komisar Scoop
It's for a good cause, to get rid of people with a contagious virus that could kill millions if it spread. But then there are technical problems. How do they dispose of bodies, through crematoria or dumping them into remote mass graves to be hidden under concrete?
The solution has to be "scalable," for a million victims, a word they don't use. Ted suggests that the bodies could be loaded onto shipping containers and pushed overboard mid-ocean. Isn't that a biohazard? You could just grease some palms.
But Sandeep raises essential doubts, "No such virus exists." Ted replies, "Not yet." So why are they doing this? Hmm. (Why do we always assume the givens?)
Sandeep says, "For it to work - for something like this to work, everyone would have to keep it secret until. until it's too late. I mean that's the problem with something like this historically, isn't it? To execute something of this scale - it's impossible to keep it secret. And if people knew, someone would stop them.."
But he gets to the point. Might people stop them from using the plan "against dissidents. Against people who look like me. Against Mexicans or gays or whomever they want to use it against, in the name of whatever they are doing things in the name of. Country? Profit? God? Well. those are the big three, aren't they?" he notes.
Of course we now know what the N-word is. And what this project could be about. 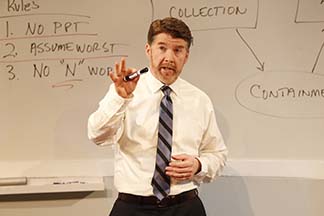 Michael Ray Wisely as Ted.
Photo: Carol Rosegg // The Komisar Scoop
Sandeep's colleagues begin to think about how to cover themselves, about the non-disclosure agreements they signed, worry that if they reveal what is going on that they won't get another job on The Street. And then, suppose there are bids from competing teams. There are conflicts.
As the tension rises, they draw charts of options, each labeled with smiley faces, happy or sad. There's rationalization. Then fear: aren't they probably being surveilled? Suppose the people at the top think that they know too much. The focus shifts from what they may be doing to others to what might happen to them.
You also begin to wonder how much of the project is fictional. Or does it stand for something else? Forget the likelihood of using the killing system against dissidents. Not yet. But what's more current? Where does killing by drones come in? Did people work out the U.S. drones project on a white board? Where does launching drones fit on the morality meter between cheating a Greek municipality and setting up an operation where the N-word is appropriate?
Aaron Loeb establishes perfectly the moral conundrum, the slippery slope of the amoral corporate/political project. You don't really know where to draw the line between the past, present and possible future. You only understand that the kind of morality represented by corporate sleaze and groupthink has seeped into areas where "a modest proposal" for killing is readily accepted by political decision-makers.
"Ideation."  Written by Aaron Loeb, directed by Josh Costello. San Francisco Playhouse at 59E59 Theaters, 59 East 59th Street, New York City. 212-279-4200. Opened March 15, 2016, closes April 17, 2016. Winner of the 2014 Will Glickman Award for best play premiering in San Francisco.
1. "A Modest Proposal for Preventing the Children of Poor People From Being a Burthen to Their Parents or Country, and for Making Them Beneficial to the Publick," known ever since as "A Modest Proposal," was a satirical essay published anonymously by Jonathan Swift in 1729. He suggested that Irish people mired in poverty might get some cash and do some good by selling their children as food for the rich.
And for another view of the play, The New York Times
Take a look at the NYT review:
Notice how NYT review ignores the setup story about how the characters had organized a privatization in  Greece, where they saved money for a client by shifting the cost of maintaining his trucks to the municipality by persuading it that the upkeep should be done by the local government "in the guise of business friendly environment." And with some "modest chargebacks," ie kickbacks. They knew the municipality couldn't afford the deal.
That tells the audience what they need to know about the characters. When the NYT critic chooses not to mention that, she misses (or avoids) the point that it is of the mindset of corporate sleaze -- not the corporate devotion to "efficiencies" -- that moves these characters readily into plotting a holocaust.
Planning a holocaust is not believable, so it's acceptable in this story, a bit of science fiction. Tied only to devotion to "efficiencies."
Scamming a foreign government is believable because it is done by US banks/hedge funds, and leading from that into the immorality of mass killing (read drones for holocaust) it is also believable and is therefore not what this NYT critic wanted to mention.
Subscribe to Portside