The Israeli mainstream newspaper Yediot Ahronoth held its first conference targeting the Boycott, Divestment and Sanctions (BDS) movement. The Yediot Achronot conference attacking BDS has become a veritable carnival of hate. Everyone from delusional Hollywood celebrities (Roseanne Barr) to cabinet ministers, to the leader of the Opposition have pledged fealty to the cause. Two of the speakers are under criminal investigation for corrupt political or financial dealings. 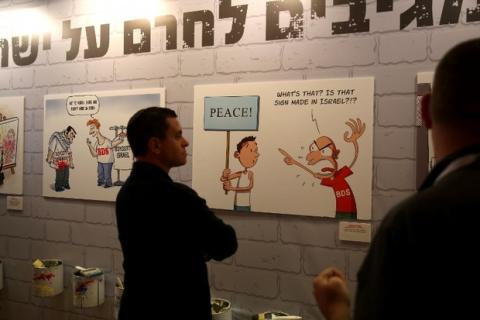 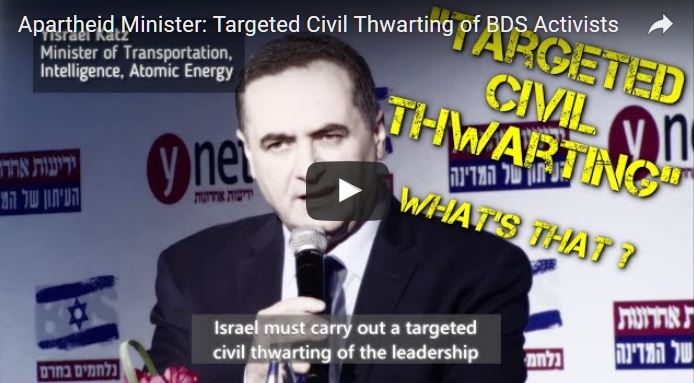 Listen here.
We are entering dangerous territory when an Israeli cabinet minister engages in wordplay that implicitly places a bull's-eye on the backs of non-violent activists.  If there are Israel apologists out there who dismiss the significance of such rhetoric they are sadly mistaken.  In this torrid political environment in which Israeli leftists have become criminals and wounded Palestinian youth may be summarily executed in the street,  it is only too easy to foresee Palestinian activists like Barghouti having a bounty on their heads.
Does anyone doubt there are scores of Yigal Amirs out there who'd be pleased to strike a blow for their hateful cause by putting a bullet in the head of a Palestinian?
Not to be outdone, Interior Minister Aryeh Deri voiced blatant lies claiming Barghouti and other BDS activists are in the pay of terrorist organizations and nations hostile to Israel. He warned that Israel would use the full force of its intelligence services against BDS treating them as if they are terrorists. In this circumstance, and knowing Israel has engaged in serial assassinations of its enemies, it's not hard to foresee where this could end.
He again argued that BDS is not a political movement, but a group whose goal is Israel's destruction. In this world view, there is no difference between Omar Barghouti, Hassan Nasrallah, Ayatollah Khamenei. or even Adolf Hitler. It's truly a paranoiac state harboring a profound persecution complex.
Deri also called for stripping BDS founder Omar Barghouti of his Israeli residency, which he gained in 1994 after he married an Israeli citizen.  Deri claimed that Barghouti is employing a scam against Israel because his main residence is Ramallah and not Israel (though he's pursuing, or has completed, an MA at Tel Aviv University).  clearly, an Intelligence file has been opened against Barghouti along with video surveillance showing him in Ramallah. Isn't it odd that Israeli Jewish oligarchs may have homes around the world and live in them for much of the year without losing their citizenship?
Should Israel cancel his residency it will only reinforce the notion of Israel being an apartheid state which refuses to permit political debate; instead transforming it into criminal discourse.
Given Katz's ever so veiled threat against him it would be no wonder if Barghouti did choose to value his safety and live where he's not under threat of death! 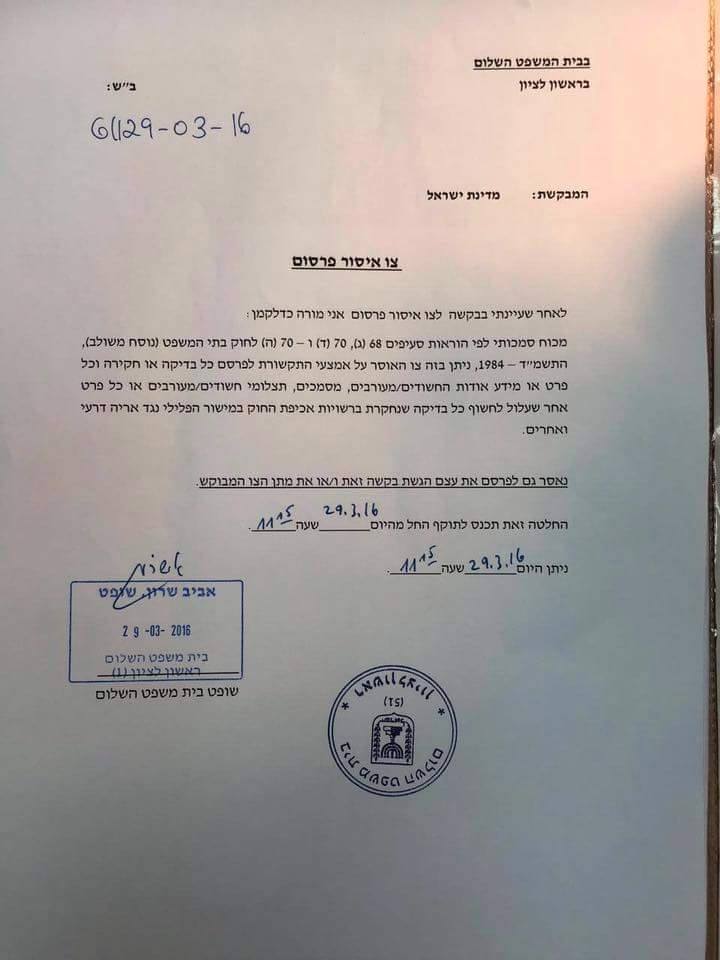 Gag order prohibiting reporting of the details of the criminal charges against Minister Aryeh Deri
credit: Tikun Olam
In this context, it's ironic Facebook activists have posted a gag order involving a potential criminal case against Deri himself. It seems that the Israeli Attorney General has been investigating criminal charges of an unspecified nature. It's important to recall that Deri has been charged with corruption in the past, been convicted, and spent time in prison. However, when his sentence was served, he was reappointed to the leadership of the Shas party, won a seat in the Knesset, and became interior minister.  It appears this recycled thief may be up to the same old tricks once more.
Israeli loyalty oath Elton John had to sign to appear in Israel
Deri's spiritual boss, Rabbi Yitzhak Yosef, told an audience of the faithful a few weeks ago that under Jewish law, no Palestinian should be allowed to live in the land of Israel. In other words, he was espousing the ethnic cleansing of Israel, and the expulsion of 20% of its population. Only later did the rabbi explain that he wasn't, God forbid, proposing that Palestinians be expelled now, but that this would only happen after the Messiah came and Israel was a proper halachic state. Is it any surprise that Deri himself would jump on the band wagon and commence the expulsion by stripping Barghouti of his legal rights to residency?
Israel's major concert promoter, Shuki Weiss, who plays a major role in combating the cultural boycott against Israel, complained at the Yediot conference that Deri's interior ministry was demanding that international artists wishing to perform in Israel sign a loyalty oath in order to obtain a visa.  The ministry immediately denied the claim. 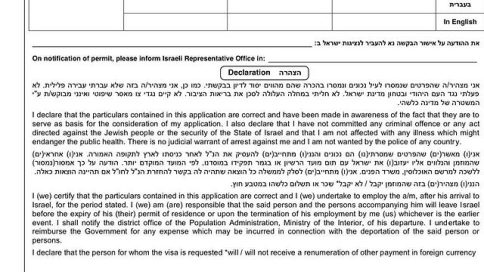 Immigration form artists must sign which affirm they have not committed any act  against "the Jewish people or. the State of Israel."
credit: Tikun Olam
The immigration form which performers and their management must sign to visit Israel demands the artist affirm he or she has not "committed any act against the Jewish people or the security of the State of Israel."  Clearly this is a form of loyalty oath.  Though countries may exclude any foreign visitor they wish for any reason, to force an international artist of Elton John's stature to pledge that he has not acted against the Jewish people seems outrageous.
[Richard Silverstein has been writing Tikun Olam, one of the earliest progressive Jewish blogs, since February, 2003.  It focuses on exposing the excesses of the Israeli national security state. He wrote a chapter for the Independent Jewish Voices essay collection, A Time to Speak Out (Verso) and will contribute a chapter to the upcoming, Israel and Palestine: Alternate Perspectives on Statehood (Rowman & Littlefield).
Silverstein currently contributes regularly to Middle East Eye and Mint Press News.  He has contributed to Truthout, Haaretz, Christian Science Monitor, Jewish Forward, Los Angeles Times, Comment Is Free and Al Jazeera English; as well as the Seattle Times, American Conservative Magazine, Beliefnet and Tikkun Magazine.  The NY Times featured his reporting about the Shamai Leibowitz FBI tapes on its front page.]
Subscribe to Portside