Labor for Bernie believes their candidate can defeat Hillary Clinton for the nomination. But Sanders supporters know that their candidate—even if he wins big in several more states—could have victory wrested from him at the convention. Therefore labor supporters gathered to discuss how to continue the movement into the future, win or lose.

April 7, 2016 Dan La Botz New Politics
Printer friendly
Labor for Bernie and Beyond Plans for the Primaries and the Future Published April 7, 2016 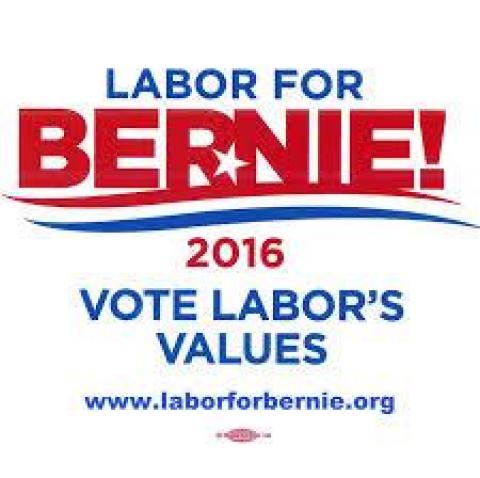 We’re going all the way to the convention,” said Larry Cohen, former President of the Communications Workers of America and Senior Advisor to the Sanders campaign. “We’re working to see that Sanders wins the Democratic Party nomination, but that’s not all we’re doing. We’re going beyond to build a democracy movement in this country.”

Cohen was speaking, just before the opening of the Labor Notes Conference, to some 125 union activists and local leaders who gathered for four hours at the Hilton Hotel in Chicago on Friday, April 1 at the Labor for Bernie and Beyond meeting. They met to discuss the next stages and of the Sanders campaign as well as the future prospects for the movement of union activists who support him. The meeting was convened by Cohen and 23 other national or local union offices.

The Labor for Bernie movement has become a national phenomenon with more than 12,000 supporters, a Facebook page with 27,000 likes and traffic of almost 400,000 hits per week. Five national unions and some 90 plus local unions—often defying their international officers’ endorsements—have endorsed Sanders in the Democratic presidential primary. Labor for Bernie claims that Sanders is now predicted to win 60 percent of the labor vote in upcoming primaries.

Labor for Bernie claims some credit for Sanders’ overwhelming victory in Washington State where he won every single county. Katie Nelson told the group that though the American Federation of State County and Municipal Employees (AFSCME) national leadership had endorsed Sanders, the Washington AFSCME Council 28 executive board, of which she is a member, voted to endorse Sanders because they had to respect their members’ wishes.

A dozen other union activists from a variety of unions around the country—from National Nurses United (NNU) and the Inland Boatmen’s Union, to the International Brotherhood of Electrical Workers and the United Auto Workers—described their successes in either winning endorsements for Sanders or in holding off nominations for Hillary Clinton.

As Sanders heads into two crucial primary elections—Wisconsin on April 5 and New York on April 15—Labor for Bernie will be concentrating on workplace organizing and using new tools to increase Sanders vote in those primaries and in other upcoming primary elections. Union members will be distributing a Bernie for President pledge card to be signed by their coworkers, collected, and used to get out the vote.

Cohen described what he called an inside-outside strategy for the Democratic Party Convention in July; that is, the Labor for Bernie and other Bernie activists plan to have as many people as possible as delegates on the inside and as many other supporters as possible on the outside of the convention. Inside, said Cohen, the group will fight for Sanders and his policies in all of the possible arenas: the credentials committee, the rules committee, the platform committee, and for the actual nomination.

Labor for Bernie, like other Sanders supporters, believes their candidate can still defeat Hillary Clinton for the nomination. But in a system where Clinton has hundreds of unelected super-delegates pledged to vote for her, and several corporate super-PACS putting large amounts into her campaign, Sanders supporters know that their candidate—even if he wins big in several more states—could have victory wrested from him at the convention. So, whatever happens at the convention, several speakers offered suggestions for the future of the progressive labor activists who are backing Bernie.

Michael Lighty of NNU told the group, “We are not in this for ‘Bernie or Bust.’ This movement will not back off.” His union, he said has already begun to organize for a June 17 People’s Assembly in Chicago, working with National Peoples Action, a housing organization, and with United Students Against Sweatshops.

Cedric Johnson, a professor of African American studies at the University of Illinois Chicago, suggested that Bernie’s supporters needed to rethink their relationship to the black movement. “The movement may not include all Blacks,” he said, because Blacks are divided into different classes with different interests.” His colleague, Dean E. Robinson, a political science professor at the University of Massachusetts Amherst, told the group, “Civil rights activists in the 1950s and 60s pressed the limits of the movement. Black politicians today tell us the limits should not be pushed—which is just the opposite. We have an opportunity to contest Black politicians.”

Seattle’s socialist City Councilwoman Kshama Sawant suggested that, “If we really want to fight the right and Trump, we must break from the Democratic Party, we begin now to create a movement for an independent candidate and consider building an independent party.” Sawant’s supporters in #Movement4Bernie are circulating a petition calling upon Sanders to “Run Through November.” It reads, “….we urge you to continue the political revolution by running independently of the Democratic Party rather than endorsing Hillary Clinton.”

Finally, Peter Olney, a retired ILWU organizer, called for the creation of a “new force for a democratic economy.” He said this force made up of unions, community groups, workers centers, immigrants groups and people advocating for people of color, LGBT rights should be organized around five key principles:

Fighting economic inequality.
Addressing discrimination based on race, gender, and sexual orientation.
Opposition to the permanent war economy and militarized foreign policy.
Tackling global climate change.
Defense of the right to organize with the labor movement playing a leading role to promote working class interests
This first conversation about the future among Labor for Bernie activists represented an important first step, but the group adopted no strategy for the future at this time. Rand Wilson, who volunteers as a coordinator for the group, said he would provide a report back to all of the national and local endorsing unions.

Many of those attending the Labor for Bernie meeting were then off to the Labor Notes conference where they would working with others to build stronger and more democratic unions, while also advocating for stepped-up involvement in the Sanders campaign.