A talk given at the "Labor for Bernie" national conference, April 1, 2016 in Chicago 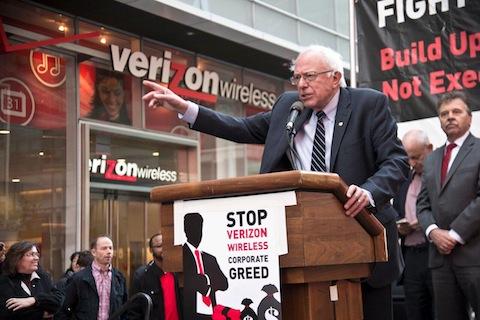 The Sanders' campaign has been a roaring success in igniting the passion of the American people for a progressive, anti-corporate agenda. It has resonated deeply with the working class because Bernie "walks the talk" that union members hear between elections. While many primaries still remain and the July Democratic convention looms, it is not too soon to start planning beyond Bernie, win or lose.

The cardinal question remains: Can the progressive left in the United States coalesce around a strategy that develops a permanent and ongoing presence in the political arena at the national, state and local level. Yes we can!

Unions, political organizations, community groups, worker centers, immigrant rights groups and organizations advocating for people of color, women and LGBT rights that consider the following statements to be true have an opportunity to come together around a common strategic vision:

1. America suffers from too great a concentration of wealth and power that is corrupting our democracy.

2. As a nation we must proactively address the historical and pressing problems of discrimination based on race, gender and sexual orientation.

3. Our permanent war economy and militarized foreign policy is not bringing us closer to genuine "national security." Our national priorities must shift to new investments in education and infrastructure, the expansion of Social Security, and Medicare for all.

4. Global climate change requires a massive shift in energy and employment policies. We are currently frittering away our opportunities to develop energy sources and new jobs that won't further degrade the planet.

5. Unions and other worker organizations are crucial bastions in the fight against inequality and essential to any viable political initiative. Therefore the defense of the right to organize and of labor's right to promote working class interests in the political sphere must be central to any progressive project.

Unity around the aforementioned general principles could provide an opportunity to work together on a common political strategy during national, state and local elections. One crucial component of such a strategy is to run or support candidates who support these principles in primary races (usually, but not exclusively, in the Democratic Party).  For a more in-depth discussion of the merits of this primary electoral strategy see "The Primary Route" by Tom Gallagher, CoasttoCoastPublications.org, 2015.

As the Sanders' campaign has shown, the best antidote to the political corruption now allowed by the Supreme Court's Citizens United decision is to "unite citizens" and support candidates who stand for these principles and campaign without the Wall Street support that dominates both major parties.

This primary strategy would be complementary to other political strategies like issue oriented initiatives and referenda, independent campaigns in "nonspoiler" situations or nonpartisan elections, fusion, recall or "insurrectionary" movements ala Chicago. All these strategies are geared to the goal of eventually having a "party of our own."

Labor unions will be central to moving this political project forward. The labor movement provides a base in the working class and the necessary savvy and resources to drive a "primary strategy." However, labor, under relentless assault from the same corporate interests and billionaires that pollute our political process, cannot do it alone. It must share leadership with other dynamic social movement organizations, especially those representing immigrants and communities of color. There is also room to learn from organizations like the Working Families Party, National People's Action and Progressive Democrats of America, etc. These groups (and many others) should be enlisted to share their experience, embrace the strategic approach to be a coordinated force in electoral primaries and other political arenas and "sign on" in unity with the five basic principles.

To continue supporting the political revolution and work constructively in broader coalition groups, the five national unions and over 90 local unions that have endorsed Bernie Sanders could form the core of a new and coherent union political formation. Once formed, other national unions and many locals would undoubtedly be attracted to it.

Most importantly, such a formation could play a leading role in the broader grouping that Sanders and the tens of millions of his supporters rightly expect to emerge from the campaign to carry on his vision and much needed change.

To move this vision forward it will be necessary for the unions that have embraced Bernie and the call for political revolution to stick together and agree to provide sufficient resources to coordinate our work. It will require union leadership forming a coordinating body and staff to begin implementing a unifying program in selected campaigns at the state and national level.

We are in a unique political moment. Our movement can't afford to miss this opportunity. The whole world is watching!

Peter Olney, retired from serving the International Longshore and Warehouse Union as Organizing Director. ILWU has endorsed Bernie Sanders for President. Peter is  now working with the Labor for Bernie organization. March 26, 2016