Sanders Allies Plot Meeting to Discuss Future of the Movement

The progressive movement that supported Sanders existed before his campaign and will continue after it. But Sanders has expanded it and unified it in a way that creates the potential for a powerful post-election force in politics if it can retain at least some cohesion. 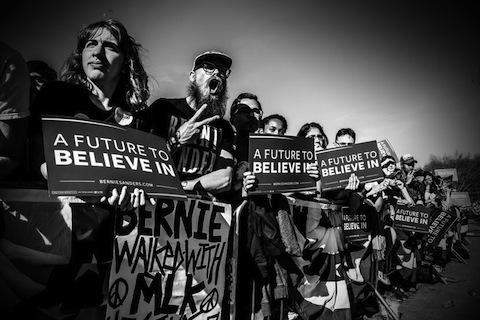 Supporters of Sen. Bernie Sanders at a rally in Prospect Park, Brooklyn, on April 17, 2016. More than 28,300 New Yorkers came out to show their support., Mark Peterson/Redux for MSNBC

Key allies of Bernie Sanders are planning to meet in Chicago after the final votes have been cast in the Democratic presidential primary to plot the future of the movement galvanized by Sanders’ presidential campaign.

Sanders’ loss in New York’s primary this week has put the Democratic nomination almost certainly out of reach, leading many to wonder what will become of the millions of people who donated, volunteered, and supported his campaign, including many who seem unready to settle for likely nominee Hillary Clinton.

The two-day People’s Summit is timed for mid-June in order to fall between the final set of primaries in California and elsewhere on June 7, and the Democratic National Convention in late July. It aims to continue building the “political revolution” Sanders often invokes and to develop a “People’s Platform” of issues important to the movement.

“There’s a vibrant conversation going on about what happens to the movement after the primaries are over,” said Charles Lenchner, who co-founded the group People for Bernie, which is helping to organize the summit. “This is a collection of groups that share a lot in common and want to work together in the future and who represent a significant portion of the coalition that has come together around Bernie Sanders.”

The event’s partners include many key players — though far from all, at least for now — of the Sanders movement. Lenchner said many other groups are likely to join.

Their focus remains on the campaign, representatives of various groups involved in the summit said, but they wanted to create a plan to come together regardless of whether Sanders wins or loses.

Taking the lead are People for Bernie, which grew out of the Occupy movement, and the National Nurses United union, which has endorsed Sanders and whose super PAC has supported the senator to the tune of nearly $3 million this year.

They’ll be joined by the environmental group 350.org, which backs Sanders, various Sanders-aligned liberal groups like Progressive Democrats of America and pro-Sanders demographic groups. Also on the list is the Iowa Citizens for Community Improvement Action Fund, which sponsored Sanders’ earliest visits to the first-in-the-nation caucus state in 2014. And then there’s the Democratic Socialists of America.

Conversations have already started in lefty circles about what happens after the primary, with a range of ideas about possible organizations, tactics and priorities.

Sanders has always been as much a movement leader as he is a politician, and hundreds of volunteer groups sprouted up organically across the country to support his candidacy and supplement his campaign’s relatively light footprint.

Almost everywhere Sanders’ campaign went, local volunteers had been first, organizing and opening field offices, some of which were absorbed by the official apparatus. In New York, for instance, it was volunteer efforts — not the campaign — that worked to get independent voters to change their party registration before the October deadline.

The progressive movement that supported Sanders existed before his campaign and will continue after it. But Sanders has expanded it and unified it in a way that creates the potential for a powerful post-election force in politics if it can retain at least some cohesion.

“Maybe we’re on the cusp of some really interesting political changes,” Lenchner said.