Half the voters in one of the richest and most successful countries in the world, one with one of the highest standards of living and one of the best social welfare systems-universal health insurance and a strong safety net - have turned against the parties that have brought them those benefits - and done so in favor of a far right wing party with Nazi party roots that has built its success on promoting fear of immigrants and possible future economic decline.... 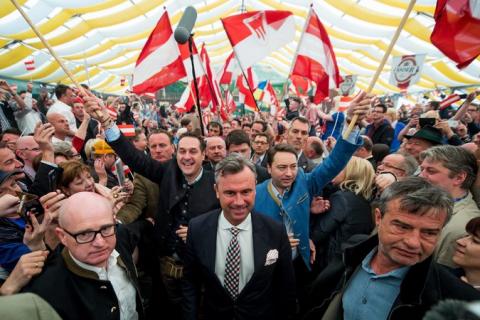 Norbert Hofer, center, of the Austrian Freedom Party, narrowly lost the presidential election., Christian Bruna/European Pressphoto Agency // New York Times
The good news is that the smiling face of the Austrian far right & semi-fascist Freedom Party, Norbert Hofer, has lost the Presidential election against Alexander Van der Bellen, the former leader of the Green Party.
The bad news is that it took the counting of absentee ballots to determine the result and Hofer only lost by 31,000 votes out of 4.5 million - i.e. he got 49.7% of the vote to Van der Bellen's 50.3%. We didn't so much dodge the bullet as just got clipped by it on the ear.
Hofer won the votes of  60% of male voters while Van der Bellen got 60% of the women's votes. 76% of voters with academic high school diplomas or higher voted for Van der Bellen, while about 2/3s of those with lower educational attainments voted for Hofer, including 60% of those making up the classic working class. It is now official, the Socialist Party of Austria is no longer the party of the working class, it is now the FPÖ that has their support. Voters over 60 split their votes evenly, those between 30 and 60 voted more for Hofer and those under 30 voted more often for Van der Bellen. Van der Bellen did best in the larger cities while the small cities, small towns and rural areas went for Hofer - so a map of district by district winners makes it look like Hofer won most of the country. The most common reason given for voting for Hofer is that he seems to be young, dynamic and sympathetic (the sort of guy you might like to have beer with). Van der Bellen's appeal was more substantive - as might be expected from a university professor.
What is clear is that half the voters in one of the richest and most successful countries in the world, one with one of the highest standards of living and one of the best social welfare systems-universal health insurance and a strong safety net - have turned against the parties that have brought them those benefits - and done so in favor of a far right wing party with Nazi party roots and a substantial neo-Nazi participation in its leadership cadres that has built its success on promoting fear of immigrants and possible future economic decline while making impossible pie in the sky promises - a national socialist, though not quite a Nazi, program.
The most bizarre thing from my point of view is that the FPÖ has won majorities in some socialist built housing complexes in Vienna where the residents pay low rents and enjoy in-house swimming pools and saunas by claiming that the far below market rents are too high and that the residents are being betrayed by the Socialist Party because it has allowed apartments to be given to immigrant families. They have no sense of how much they have benefited from socialist policies and how much better off they are than working class people elsewhere - including of course the US.
After the first round disaster for the SPÖ the Socialists have replaced their apparatchik party leader and chancellor with a more serious leader who recognizes that this is the last chance for his party (and that of their conservative coalition partners) to end the in-fighting and backbiting between the governing parties and turn things around before the next parliamentary election reduces them to minor players. The current conservative leader and vice chancellor seems to see things the same way, but some elements in the party, including the man expected to succeed him, seem to think that they would be better off sabotaging the coalition and making a coalition with the FPÖ after the next election (as they did in 2000, this time they would be very junior partners but they seem to think they would still dominate the government as they did then).
We shall see what comes next.
[Stan Nadel lives in Vienna.]