The split amid an unexpectedly contentious Democratic primary season has exposed contrasting agendas in organized labor. Trade unionists are exercised by international deals, which they blame for the loss of hundreds of thousands of manufacturing jobs. Service workers less affected by globalization advocate collective-bargaining rights and wage protection. 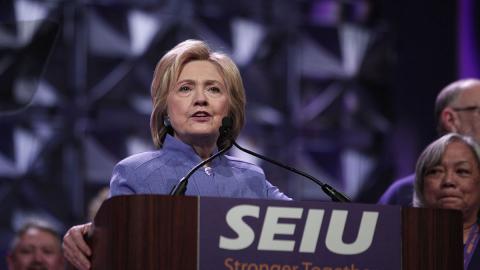 Before the holidays last year, three unions representing 6.6 million active or retired service workers and public employees endorsed Democrat Hillary Clinton for president. The AFL-CIO and its trade workers, representing 12.5 million people, are in no such hurry.

The split amid an unexpectedly contentious Democratic primary season has exposed contrasting agendas in organized labor. Trade unionists are exercised by international deals, which they blame for the loss of hundreds of thousands of manufacturing jobs. Service workers less affected by globalization advocate collective-bargaining rights and wage protection.

Even as leaders vow that organized labor will be united behind the Democratic candidate, the appeal of the presumptive Republican nominee, real-estate developer and television personality Donald Trump, could peel away rank-and-file votes in the fall.

"A lot of people are just fed up with establishment politics," said Chuck Jones, president of United Steelworkers Union Local 1999, which represents 1,400 Indianapolis workers about to lose their jobs because Carrier Corp. is moving operations to Mexico. Jones’s local endorsed Democrat Bernie Sanders, whose anti-free trade stance has won the support of many rank and file workers.

The election is more than five months away and Democrats say there’s plenty of time to heal wounds and unite. They say unions such as the AFL-CIO often sit on the sidelines until the Democratic nominee is selected. (The giant labor federation has endorsed only twice before the party’s nominee was clear, in 1984 and 2000. )

Trump is a wild card. The Republican, like Ronald Reagan in the 1980s, could make inroads among traditional Democratic voters unhappy with the uneven and sluggish pace of the economic recovery. He has made Carrier’s decision a frequent object of derision and has often talked about winning states like Michigan, Pennsylvania and Wisconsin, which haven’t delivered their electoral votes to a Republican since the 1980s.

"This is a time when a Donald Trump can emerge," said Robert Bruno, a professor of labor and employment relations at the University of Illinois.

The disarray for organized labor follows a long decline. Membership peaked in the mid-1950s, at about one-third of the U.S. work force. In 2015, the percentage was 11.1 percent, according to the Bureau of Labor Statistics.

While the movement was born in steel mills, auto assembly lines and coal mines, much of the modern rank-and-file is found in classrooms, state and local office buildings and prisons. Public sector and service-union membership outnumbers that of trade unions by 5-to-1. And the gap is getting wider.

"Manufacturing workers are very sensitive to trade issues, while service workers and teachers are focused on austerity budgets and government spending," Bruno said. "It’s playing out in a more dramatic way because there’s never been a Republican candidate who was so anti-trade. This certainly raises the profile of the disagreements."

Although Clinton entered the race last year as the strong favorite, Sanders’s populist campaign tapped anger over Wall Street, income inequality and blue-collar job losses. The Vermont senator’s path to the nomination is almost impossible, yet an average of recent polls have him defeating Trump by 11 points, while Clinton is effectively tied with Trump, according to RealClearPolitics.

The dynamic is complicated by Clinton’s record in support of the North American Free Trade Agreement, which her then-president husband championed more than two decades ago. Sanders calls trade pacts "disastrous" while Trump pledges to renegotiate or scuttle Nafta. Some workers have taken note.

Geno DiFabio, 53, a truck driver and a former member of the International Brotherhood of Teamsters union, said he was a Democrat since he started voting at 18. Then, he took a Republican ballot in Ohio’s March 15 primary to vote for Trump.

DiFabio, who is from the hollowed-out steel center of Youngstown, said he has been increasingly turned off by the positions that Clinton and other Democrats have taken on immigration, gun rights and abortion.

"There’s enough to dislike about her to say, ‘Well, let’s give Trump a try,”’ DiFabio said.

In Pennsylvania, about 28 percent of the 800,000 AFL-CIO members are Republicans, and while those members may back Trump, it’s unlikely he will woo many others, said Rick Bloomingdale, the organization’s president in that state.

“He wasn’t against bad trade deals until he started running for president,” Bloomingdale said. “The voters are not stupid.”

Even if Trump appeals to some white union men, that will be offset or even overcome by the number of union women, blacks and Latinos against him, said Steve Rosenthal, a Democratic consultant in Washington who was political director at the AFL-CIO from 1995 to 2002.

“I’m in the school that when the votes are counted, he’s just going to be another Republican presidential candidate,” Rosenthal said.

In any event, the influence of union endorsements is limited, said Chuck Deppert, former president of the Indiana State AFL-CIO.

"The leadership is a lot closer to the Democratic Party than the average union worker is," said Deppert, who led the organization from 1989 to 1997. "They elected Obama and expected great things, but the average guy in the factory doesn’t see much difference. The jobs are still slipping away."