The meat and poultry industry remains exceptionally dangerous, despite a decline in reported injuries and illnesses over the past 10 years, according to a new Government Accountability Office (GAO) report. Further, says the report, the injury and illness rates reflected in Department of Labor numbers are significantly underreported.

May 29, 2016 Elizabeth Grossman In These Times
Printer friendly
New Study Reveals Just How Brutal Meat and Poultry Work Is for Workers Published May 29, 2016 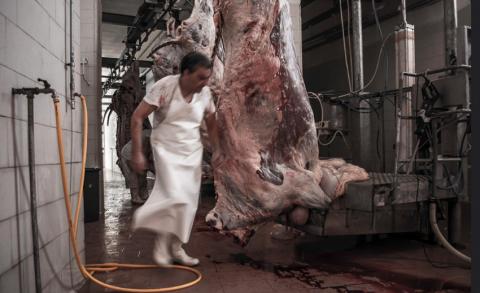 The meat and poultry industry remains exceptionally dangerous, despite a decline in reported injuries and illnesses over the past 10 years, according to a new Government Accountability Office (GAO) report. Further, says the report, the injury and illness rates reflected in Department of Labor numbers are significantly underreported. As a result, these figures do not fully represent what is actually happening within this industry that employs about 526,000—including many recent immigrants and noncitizens. The report also found evidence of workers being denied proper medical treatment on the job and that they often fail to report injuries for fear it will cost them their jobs.

Released Wednesday by Senator Patty Murray (D-WA), Senator Bob Casey (D-PA) and Congressman Bobby Scott (D-VA), the report notes that working conditions in the industry have not improved substantially since the GAO examined the industry in 2005. Workers in poultry and meat processing plants, says the report, “continue to face the hazardous conditions the GAO cited in 2005, including tasks associated with musculoskeletal disorders, exposure to chemicals and pathogens and traumatic injuries from machines and tools.”

“Today’s report makes clear that workers still face hazardous conditions that put their health and safety in jeopardy,” said Senator Murray on a call with reporters. “In our country every worker should be able to earn a living with dignity and without worrying that their work will make them sick or injured,” she said.

“The pain never really went away. It just went up my arms and elbows,” said former Nebraska meatpacking work Jose Gaytan on the call. “The work speeds of the plant were so fast that my hands would swell up and lock up,” he said. Gaytan described how the plant processed 1500 to 1800 head of cattle a day, so that each worker processed 250 to 300 “loins” per day—each about 80 pounds of “frozen cow meat and bones” —or almost one per minute. There were “falls slips, burns and cuts and crippling injuries to co-workers,” said Gayton. “I saw two different saw operators cut off fingers because the line was coming too fast,” he said.

Line speed is a huge problem in these plants where poultry workers typically handle 30 or more turkeys and 100 or more chickens a minute.

Omar Hassan, who worked at a Jennie-O turkey plant in Minnesota for over two-and-a-half years described how when he came back to work after a finger and shoulder industry with a doctor’s note saying he could not do the same level of work as before, the company refused to accommodate him. “I tried talking them into placing me on light duty,” he said. But the company refused, “and they fired me after that,” said Hassan, speaking on the call through an interpreter who translated from Somali.

Also contributing to the injury undercount, says the GAO, is that injuries and illnesses suffered by workers hired through labor contractors may not be properly accounted for. Contributing to these problems is the industry’s high turnover rate—“often 100 percent or more annually,” said Southern Poverty Law Center staff attorney Sarah Rich.

Poultry and meat plant workers often include “refugees, undocumented immigrants and prisoners,” said Rich. These workers, she said are “often fired and treated as disposable by these companies.” And all this contributes to “a climate of fear that prevents workers from speaking out,” she said.

Musculoskeletal disorders rampant in meat and poultry processing but underreported

The GAO also reports that injuries included in official records cover only those for which workers took time off. This means they fail to account for many of the musculoskeletal disorders that are widespread throughout the industry.

According to the Occupational Safety and Health Administration (OSHA), the U.S. Bureau of Labor Statistics has found that musculoskeletal disorders account for many of the injuries that create a serious injury rate for the meat and poultry processing industry that is more than 3 times higher than other U.S. industries. In a 2015 report, the National Institute of Occupational Safety and Health (NIOSH) found 81 percent of the poultry plant jobs it evaluated exceeded recommended limits for hand activity and that 34 percent of employees had symptoms qualifying as carpel tunnel syndrome.

“We should have no confidence about industry’s assertions about their injury rates,” says Celeste Monforton, professorial lecturer in occupational and environmental health at George Washington University’s Milken Institute School of Public Health. She describes a NIOSH investigation finding that a Maryland poultry plant logbooks showed only four cases of carpel tunnel syndrome over four years while NIOSH found 18 workers with those injuries at the same plant.

She also described an OSHA Alabama poultry plant investigation that found a worker who was seen 94 times by a company nurse before being referred to a physician for treatment. “The industry games the system,” says Monforton, explaining that first aid is not recorded in company logs.

“The GAO report reinforces and validates reports released by independent groups for over ten years,” says Rich, listing reports by the Southern Poverty Law Center, Oxfam America, by Alabama Appleseed, Northwest Arkansas Workers Justice Center and others as well as investigations by NIOSH and OSHA.

“We uncovered many of the same issues the GAO has now confirmed. Workers have told us about the same conditions that the GAO detailed in their report today,” Oxfam America senior advocacy advisor Oliver Gottfried told reporters. In addition to denial of medical care, fear of retaliation, and lack of reporting on industry logs, Oxfam America has recently reported on how poultry plant workers’ are denied adequate bathroom bathroom breaks.

Speaking in Hmong, through an interpreter, a Tyson foods poultry plant worker called May, explained that the company only allows her to use the bathroom twice per night. “That is not enough for people,” says May, who works cutting meat. She also described how people who work close to meat get chemicals sprayed on their hands and face.

The report, “highlights the greatly improved worker safety record of the meat and poultry industry over the last 10 years,” said the North American Meat Institute (NAMI) in a statement. “There is always room for improvement and we will look closely at the GAO recommendations to see how they can best be implemented in the industry,” said NAMI president and CEO Barry Carpenter.

“We are pleased to see the report emphasizes the fact that injuries and illnesses have decreased dramatically in the poultry processing industry over the past several years,” said the National Chicken Council in its statement. “Perhaps more than any other industry, the poultry industry has focused its energies on the prevention of workplace injuries and illnesses, especially musculoskeletal disorders (MSDs) like carpal tunnel syndrome,” said the council.

So what happens next?

Sen. Murray voiced support for OSHA’s new rule that will provide workers with more protection from retaliation against injury reporting and improve OSHA’s access such records. “In our country every worker should be able to earn a living with dignity and without worrying that their work will make them sick or injured,” said Murray.

“We’re taking it to the public,” Berkowitz tells In These Times. “Consumers have a tremendous influence on this industry,” she says. “We are hoping consumers are starting to take a look … at the inhumane conditions of workers and that industry has to respond by lifting standards.”

And Gottfied says reporting on industry conditions is already prompting workers to seek help in speaking out about workplace health and safety.