Pride of place as the first large scale ritual of Decoration Day, therefore, goes to African Americans in Charleston. By their labor, their words, their songs, and their solemn parade of flowers and marching feet on their former owners’ race course, they created for themselves, and for us, the Independence Day of the Second American Revolution. 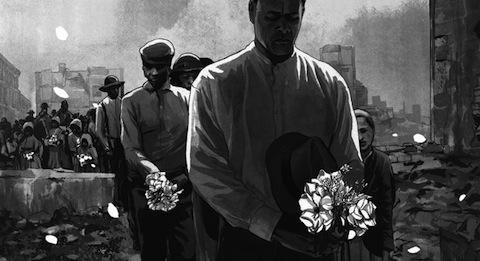 Americans understand that Memorial Day, or “Decoration Day,” as my parents called it, has something to do with honoring the nation’s war dead. It is also a day devoted to picnics, road races, commencements, and double-headers. But where did it begin, who created it, and why?

As a nation we are at war now, but for most Americans the scale of death and suffering in this seemingly endless wartime belongs to other people far away, or to people in other neighborhoods. Collectively, we are not even allowed to see our war dead today. That was not the case in 1865.

At the end of the Civil War the dead were everywhere, some in half buried coffins and some visible only as unidentified bones strewn on the killing fields of Virginia or Georgia. Americans, north and south, faced an enormous spiritual and logistical challenge of memorialization. The dead were visible by their massive absence. Approximately 620,000 soldiers died in the war. American deaths in all other wars combined through the Korean conflict totaled 606,000. If the same number of Americans per capita had died in Vietnam as died in the Civil War, 4 million names would be on the Vietnam Memorial. The most immediate legacy of the Civil War was its slaughter and how we remember it.

War kills people and destroys human creation; but as though mocking war’s devastation, flowers inevitably bloom through its ruins. After a long siege, a prolonged bombardment for months from all around the harbor, and numerous fires, the beautiful port city of Charleston, South Carolina, where the war had begun in April, 1861, lay in ruin by the spring of 1865. The city was largely abandoned by white residents by late February. Among the first troops to enter and march up Meeting Street singing liberation songs was the Twenty First U. S. Colored Infantry; their commander accepted the formal surrender of the city.

Thousands of black Charlestonians, most former slaves, remained in the city and conducted a series of commemorations to declare their sense of the meaning of the war. The largest of these events, and unknown until some extraordinary luck in my recent research, took place on May 1, 1865. During the final year of the war, the Confederates had converted the planters’ horse track, the Washington Race Course and Jockey Club, into an outdoor prison. Union soldiers were kept in horrible conditions in the interior of the track; at least 257 died of exposure and disease and were hastily buried in a mass grave behind the grandstand. Some twenty-eight black workmen went to the site, re-buried the Union dead properly, and built a high fence around the cemetery. They whitewashed the fence and built an archway over an entrance on which they inscribed the words, “Martyrs of the Race Course.”

Then, black Charlestonians in cooperation with white missionaries and teachers, staged an unforgettable parade of 10,000 people on the slaveholders’ race course. The symbolic power of the low-country planter aristocracy’s horse track (where they had displayed their wealth, leisure, and influence) was not lost on the freedpeople. A New York Tribune correspondent witnessed the event, describing “a procession of friends and mourners as South Carolina and the United States never saw before.”

At 9 a.m. on May 1, the procession stepped off led by three thousand black schoolchildren carrying arm loads of roses and singing “John Brown’s Body.” The children were followed by several hundred black women with baskets of flowers, wreaths and crosses. Then came black men marching in cadence, followed by contingents of Union infantry and other black and white citizens. As many as possible gathering in the cemetery enclosure; a childrens’ choir sang “We’ll Rally around the Flag,” the “Star-Spangled Banner,” and several spirituals before several black ministers read from scripture. No record survives of which biblical passages rung out in the warm spring air, but the spirit of Leviticus 25 was surely present at those burial rites: “for it is the jubilee; it shall be holy unto you… in the year of this jubilee he shall return every man unto his own possession.”

Following the solemn dedication the crowd dispersed into the infield and did what many of us do on Memorial Day: they enjoyed picnics, listened to speeches, and watched soldiers drill. Among the full brigade of Union infantry participating was the famous 54th Massachusetts and the 34th and 104th U.S. Colored Troops, who performed a special double-columned march around the gravesite. The war was over, and Decoration Day had been founded by African Americans in a ritual of remembrance and consecration. The war, they had boldly announced, had been all about the triumph of their emancipation over a slaveholders’ republic, and not about state rights, defense of home, nor merely soldiers’ valor and sacrifice.

According to a reminiscence written long after the fact, “several slight disturbances” occurred during the ceremonies on this first Decoration Day, as well as “much harsh talk about the event locally afterward.” But a measure of how white Charlestonians suppressed from memory this founding in favor of their own creation of the practice later came fifty-one years afterward, when the president of the Ladies Memorial Association of Charleston received an inquiry about the May 1, 1865 parade. A United Daughters of the Confederacy official from New Orleans wanted to know if it was true that blacks had engaged in such a burial rite. Mrs. S. C. Beckwith responded tersely: “I regret that I was unable to gather any official information in answer to this.” In the struggle over memory and meaning in any society, some stories just get lost while others attain mainstream dominance.

Officially, as a national holiday, Memorial Day emerged in 1868 when General John A. Logan, commander-in-chief of the Grand Army of the Republic, the Union veterans organization, called on all former northern soldiers and their communities to conduct ceremonies and decorate graves of their dead comrades. On May 30, 1868, when flowers were plentiful, funeral ceremonies were attended by thousands of people in 183 cemeteries in twenty-seven states. The following year, some 336 cities and towns in thirty-one states, including the South, arranged parades and orations. The observance grew manifold with time. In the South, Confederate Memorial Day took shape on three different dates: on April 26 in many deep South states, the anniversary of General Joseph Johnston’s final surrender to General William T. Sherman; on May 10 in South and North Carolina, the birthday of Stonewall Jackson; and on June 3 in Virginia, the birthday of Jefferson Davis.

Over time several American towns, north and south, claimed to be the birthplace of Memorial Day. But all of them commemorate cemetery decoration events from 1866. Pride of place as the first large scale ritual of Decoration Day, therefore, goes to African Americans in Charleston. By their labor, their words, their songs, and their solemn parade of flowers and marching feet on their former owners’ race course, they created for themselves, and for us, the Independence Day of the Second American Revolution.

The old race track is still there—an oval roadway in Hampton Park in Charleston, named for Wade Hampton, former Confederate general and the white supremacist Redeemer governor of South Carolina after the end of Reconstruction. The lovely park sits adjacent to the Citadel, the military academy of South Carolina, and cadets can be seen jogging on the old track any day of the week. The old gravesite dedicated to the “Martyrs of the Race Course” is gone; those Union dead were reinterred in the 1880s to a national cemetery in Beaufort, South Carolina. Some stories endure, some disappear, some are rediscovered in dusty archives, the pages of old newspapers, and in oral history. All such stories as the First Decoration Day are but prelude to future reckonings. All memory is prelude.

Blight is the author of “American Oracle” and many other books.

—By David W. Blight. Blight is professor of American history at Yale University and director of the Gilder-Lehrman Center for the Study of Slavery, Resistance and Abolition. Blight has won major historical awards, including the Bancroft Prize and the Frederick Douglass Prize. He is the author of many books on U.S. history.

Posted at the Zinn Education Project website with permission of the author from The First Decoration Day.