At the close of the Civil War, people recently freed from slavery in Charleston honored fallen Union soldiers. A battered U.S. was faced with the task of burying and honoring the 600,000 to 800,000 Union and Confederate soldiers who had died.

May 30, 2022 Dave Roos History
Printer friendly
One of the Earliest Memorial Day Ceremonies Was Held by Freed African Americans Published May 30, 2022 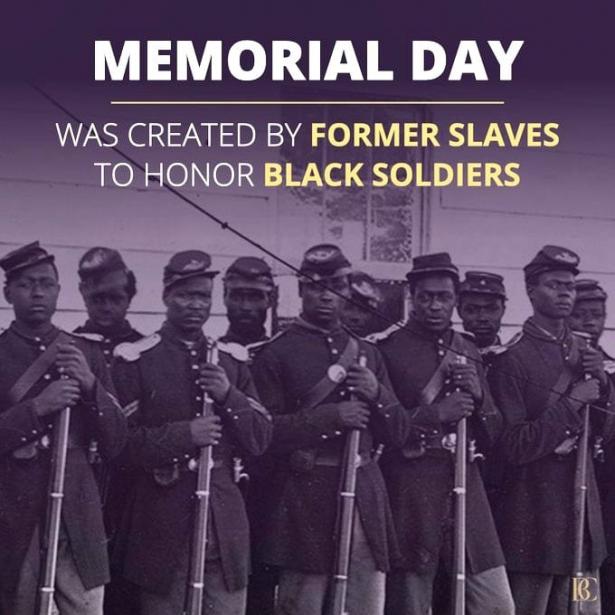 The first national commemoration of Memorial Day was held in Arlington National Cemetery on May 30, 1868, where both Union and Confederate soldiers are buried.

Several towns and cities across America claim to have observed their own earlier versions of Memorial Day or “Decoration Day” as early as 1866. (The earlier name is derived from the fact that decorating graves was and remains a central activity of Memorial Day.) But it wasn’t until a remarkable discovery in a dusty Harvard University archive the late 1990s that historians learned about a Memorial Day commemoration organized by a group of Black people freed from enslavement less than a month after the Confederacy surrendered in 1865.

Back in 1996, David Blight, a professor of American History at Yale University, was researching a book on the Civil War when he had one of those once-in-a-career eureka moments. A curator at Harvard’s Houghton Library asked if he wanted to look through two boxes of unsorted material from Union veterans.

“There was a file labeled ‘First Decoration Day,’” remembers Blight, still amazed at his good fortune. “And inside on a piece of cardboard was a narrative handwritten by an old veteran, plus a date referencing an article in The New York Tribune. That narrative told the essence of the story that I ended up telling in my book, of this march on the race track in 1865.”

TThe race track in question was the Washington Race Course and Jockey Club in Charleston, South Carolina. In the late stages of the Civil War, the Confederate army transformed the formerly posh country club into a makeshift prison for Union captives. More than 260 Union soldiers died from disease and exposure while being held in the race track’s open-air infield. Their bodies were hastily buried in a mass grave behind the grandstands.

When Charleston fell and Confederate troops evacuated the badly damaged city, those freed from enslavement remained. One of the first things those emancipated men and women did was to give the fallen Union prisoners a proper burial. They exhumed the mass grave and reinterred the bodies in a new cemetery with a tall whitewashed fence inscribed with the words: “Martyrs of the Race Course.”

And then on May 1, 1865, something even more extraordinary happened. According to two reports that Blight found in The New York Tribune and The Charleston Courier, a crowd of 10,000 people, mostly freed slaves with some white missionaries, staged a parade around the race track. Three thousand Black schoolchildren carried bouquets of flowers and sang “John Brown’s Body.” Members of the famed 54th Massachusetts and other Black Union regiments were in attendance and performed double-time marches. Black ministers recited verses from the Bible.

If the news reports are accurate, the 1865 gathering at the Charleston race track would be the earliest Memorial Day commemoration on record. Blight excitedly called the Avery Institute of Afro-American History and Culture at the College of Charleston, looking for more information on the historic event.

But it was clear from the newspaper reports that a Memorial Day observance was organized by freed slaves in Charleston at least a year before other U.S. cities and three years before the first national observance. How had been lost to history for over a century?

“This was a story that had really been suppressed both in the local memory and certainly the national memory,” says Blight. “But nobody who had witnessed it could ever have forgotten it.”

Blight kept digging for more information, but the only other mention he found of the race track event was in a 1916 correspondence sent from a women’s Civil War historical society in New Orleans to its sister chapter in Charleston, asking about a big parade of freed slaves on a horse track at the end of the war.

“I regret that I was unable to gather any official information in answer to this,” wrote the Charleston society’s president.

“That’s such a telling statement,” says Blight. “The woman who wrote that letter may not have known about it, but the fact that she didn’t tells the story.”

Once the war was over and Charleston was rebuilt in the 1880s, the city’s white residents likely had little interest in remembering an event held by former enslaved people to celebrate the Union dead. “That didn’t fit their version of what the war was all about,” says Blight.

In time, the old horse track and country club were torn down, and thanks to a gift from a wealthy Northern patron, the Union soldiers' graves were moved from the humble white-fenced graveyard in Charleston to the Beaufort National Cemetery. By the time Blight was rummaging through the Harvard archives in 1996, the story of the first Memorial Day had been entirely forgotten.

Or perhaps not entirely.

After his book Race and Reunion was published in 2001, Blight gave a talk about Memorial Day at the Smithsonian National Museum of American History, and after it was finished, an older Black woman approached him.

“You mean that story is true?” the woman asked Blight. “I grew up in Charleston, and my granddaddy used to tell us this story of a parade at the old race track, and we never knew whether to believe him or not. You mean that’s true?”

For Blight, it’s less important whether the 1865 commemoration of the “Martyrs of the Race Course” is officially recognized as the first Memorial Day.

“It’s the fact that this occurred in Charleston at a cemetery site for the Union dead in a city where the Civil war had begun,” says Blight, “and that it was organized and done by African American former slaves is what gives it such poignancy.”

[Dave Roos is a freelance writer based in the United States and Mexico. A longtime contributor to HowStuffWorks, Dave has also been published in The New York Times, the Los Angeles Times and Newsweek.]