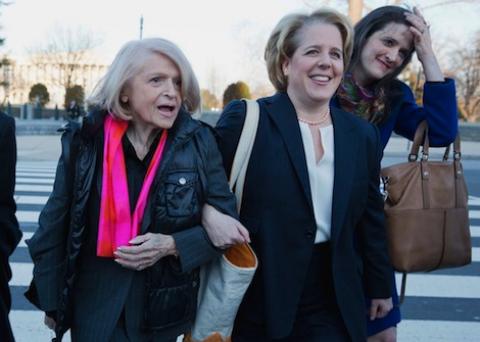 Roberta Kaplan (center) with Edie Windsor (left), the plaintiff in a successful challenge to the Defense of Marriage Act in 2013., Joshua Roberts/Reuters

Mississippi’s new anti-LGBTQ segregation law, HB 1523, contains a lot of legally dubious provisions. But no part is more blatantly unconstitutional than a ridiculous section purporting to create a “separate but equal” scheme for marriage licensing. Under the law, circuit clerks—who are tasked with issuing marriage licenses—can refuse to license same-sex couples based on their religious belief that “[m]arriage is or should be recognized as the union of one man and one woman.” That clause blatantly contradicts the Supreme Court’s decision in Obergefell v. Hodges, which requires states to issue marriage licenses to same-sex couples “on the same terms and conditions” as opposite-sex couples.

When is Mississippi going to learn it can’t sneak this stuff past Roberta Kaplan? Kaplan emerged as Mississippi’s fiercest LGBTQ rights defender after toppling the federal same-sex marriage ban back in 2013. Two years later, Kaplan secured a victory against Mississippi’s same-sex marriage ban, then successfully fought to overturn Mississippi’s anti-gay adoption law. Notably, her July victory took the form of a permanent injunction barring the state from restricting same-sex couples’ marriage rights in any way. So when Mississippi passed its latest anti-LGBTQ legislation, Kaplan knew what to do: She simply asked to reopen the marriage case, asking Judge Carlton W. Reeves to enjoin the state from implementing HB 1523’s marriage segregation provision.

Kaplan’s case should be—and very likely will be—a slam dunk. Reeves’ injunction barred all “agents, officers, employees, and subsidiaries” of Mississippi from treating same-sex couples differently from opposite-sex couples. HB 1523 explicitly contravenes this order, granting circuit clerks the total freedom to turn away same-sex couples while continuing to license opposite-sex couples. But the state is zealously battling Kaplan’s request to reopen the case—leading Kaplan to file a powerful reply brief on Wednesday, slapping down Mississippi’s ridiculous arguments against her most recent motion. As Kaplan summarizes the state’s position:

Defendants contend that gay couples seeking to marry in Mississippi should … quietly abide the stigmatic injury of once again being relegated to second-class citizenship and live with the uncertainty of not knowing whether the Circuit Clerk in the county where they live and whose salary their tax dollars help to pay will stand in the way of their constitutional right to marry.

And while much of the brief is devoted to swatting away the state’s feeble technical defenses, Kaplan manages to nail Republican Gov. Phil Bryant for his Kim Davis–esque anti-gay intransigence:

Indeed, rather than express a “willingness to meet constitutional requirements,” Governor Bryant recently stated in a public address that the “secular, progressive” opponents of HB 1523 “don’t know that if it takes crucifixion, we will stand in line before abandoning our faith and our belief in our Lord and savior, Jesus Christ.”

Mississippi argues that, even if HB 1523 does violate same-sex couples’ constitutional rights, these couples should have to wait to be discriminated against before bringing legal action. That, Kaplan explains, is rubbish:

Defendants [suggest] that Plaintiffs should wait to “have their day in court” until there has been a violation of their constitutional rights and only then sue each offending Circuit Clerk. This is hardly an adequate legal remedy. Plaintiffs cannot reasonably be expected to wait until their rights are violated in order to seek relief. This Court has already ruled that the State of Mississippi may not relegate gay and lesbian couples to second-class citizenship. Gay and lesbian couples in Mississippi should not have to suffer the uncertainty of not knowing whether their trip to the Circuit Clerk’s office to obtain a marriage license will end in joy or the humiliation of being turned away because of their second-class status.

Luckily for Kaplan, the judge in this case is one of the country’s best: Reeves wrote arguably the most comprehensive and cogent marriage-equality decision of any federal district judge, an incredibly moving testament to the importance of equal dignity under the law. Kaplan’s motion pushes this case one step closer to resolution, ensuring that every Mississippi couple’s trip the clerk’s office will indeed end in joy—and not an absurd, stigmatizing constitutional violation that the highest court in the land outlawed nearly a year ago.

Mark Joseph Stern is a writer for Slate. He covers the law and LGBTQ issues.