film Film: "I, Daniel Blake" - Ken Loach's Shock at the 'Conscious Cruelty' of the Welfare State

Ken Loach just became the first British director to win the Palme d’Or at Cannes twice, when his welfare state polemic I, Daniel Blake picked up the prize. The 79-year-old film-maker had previously announced he was finished with directing but became so infuriated by the plight of the poor under the current Conservative government that he came out of retirement to make a new film, addressing the human cost of their policies. ‘Hunger is being used as a weapon.' 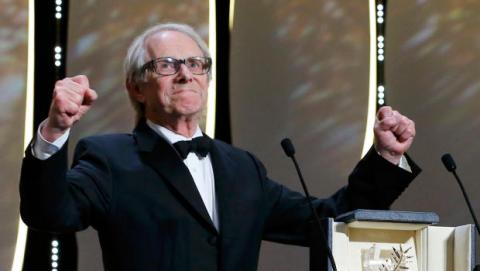 Last week Ken Loach won the Palme d'Or at Cannes for I, Daniel Blake.  The following article is based on an interview the Guardian conducted with the director on the set last November:

Ken Loach has said there needs to be more public outrage around benefit sanctions and the reliance on food banks, with the situation much worse for working people than when he made his seminal film Cathy Come Home, in 1966.

The veteran film-maker rarely speaks while developing a project but is was so deeply concerned about government policy on benefits and the sanctions regime that he gave an interview to the Guardian months ago while on the set of his latest film, I Daniel Blake.

Loach, 79, is shooting what may be his last film, I, Daniel Blake, based on the writer Paul Laverty’s research of jobcentres, benefit sanctions and food banks. It tells the story of Blake, who has worked for years as a joiner but is then forced to give up work and claim benefits. “The present system is one of conscious cruelty,” Loach said. “It bears down on those least able to bear it. The bureaucratic inefficiency is vindictive and hunger is being used as a weapon. People are being forced to look for work that doesn’t exist.”

Loach, whose film is to be released lin 2016, said he was shocked by the sheer number of hungry people he had seen at a food bank. “This is a real open wound in our society. We are just closing our eyes to this. The situation is much worse than in the days of Cathy Come Home, at least then if people had a trade they could have a job for life.

“Those jobs don’t exist now and working people are no longer in control of their own lives. All this is about dividing people into skivers and strivers. There needs to be public rage about this.”

Cathy Come Home, a celebrated television play originally broadcast on BBC1, followed the story of a couple who lose their home and face homelessness after being hit by unemployment.

The film-maker called on the Labour leader, Jeremy Corbyn, to do more to highlight the situation. “The idea that someone in the system can decide whether or not you can eat is appalling. Where is the Labour party on this? We should have the Tories on the run on this one.

“Come on Jeremy, we want to hear from you on this issue. People are feeling oppressed and crushed and powerless. What is the point of the Labour movement if not to give voice to people in these situations?”

There has been criticism of the government’s benefits regime, with charities such as Mind raising concerns following research linking fit-for-work tests to hundreds of extra suicides.

A coroner has said that the suicide of one disabled man, Michael O’Sullivan, in 2013 was triggered by intense anxiety caused by his experience with the controversial work-capability assessment process.

It emerged last month that an early warning system for benefit claimants facing sanctions is to be trialled in response to claims that an excessively punitive and bureaucratic system is driving some claimants deeper into poverty.

A spokesperson for the Department for Work and Pensions said employment was now at a record high and unemployment was back to pre-recession levels.

“We have been very clear there are no targets for sanctions and that reductions in benefits are only ever used as a last resort for a very small minority. The vast majority of jobseekers do everything expected of them in return for their benefits, and accept the support on offer to move into work,” the spokesperson said.

As ever, real life and the world of Loach’s films are closely intertwined. Disaffected former staff from a real jobcentre in the north-east of England appear as extras in the film, along with people who have received benefits sanctions. A mix of professional actors and non-professionals appear in the film. One former jobcentre employee who appears in the film said the stress of the job made her ill and she was so uncomfortable about what managers expected of her that she quit.

“Back in 2002 we used to be able to sort out people’s queries about benefits there and then,” she said. “Now everything is centralised and we can’t do that any more. We used to be able to do more to help vulnerable people than is possible now. I remember one man who had multiple sclerosis. He worked … for as long as he could but eventually his employers said he was too ill to continue working there. He was on employment support allowance [for people who have health problems] but was moved on to jobseeker’s allowance. He was too ill to look for work so he was sanctioned.”

She said people with mental health problems particularly struggled under the current regime. “Some of these people haven’t got a cat in hell’s chance of getting a job. The way they are treated is humiliating. I have seen people age 15 years over a five-year period. That is what the system has done to them. A terrible climate has been created where people are encouraged to snoop on others.

“We were told there were no targets for staff about how many people we sanctioned, but some of those who didn’t sanction many claimants would be called into the manager’s office and might be given a performance-improvement plan. Whiteboards started to pop up with different targets and percentages on them.”

Stuart Macdonald, 21, is an extra in the film. He gets work in call centres when he can but is often only offered short-term contracts and has been sanctioned several times when he has had to claim benefits. “I would say that when I have been sanctioned it has been down to poor communication rather than anything else. I have had to miss meals and the sanctions have put an enormous strain on my relationship with my mum,” he said.

Rebecca O’Brien, a producer of the film, said that it was particularly important to make it at the moment. “The situation seems increasingly urgent. The state doesn’t seem to be there for people in the way that it used to be.”

Dave Johns, 59, who plays Daniel Blake, is a standup comedian. He said that he was enjoying every minute of working with Loach and his team: “It is just like one big family on set.” Johns said he had had no idea just how bad things were in the world of benefits and was horrified by the subject matter of the film.

“The last time I signed on was in the 1970s, when it was the labour exchange. Things were very different then. It is shocking what is happening to people and I hope that this film will help to let people know what is really going on.”

[Diane Taylor is a a freelance journalist and author with a particular interest in human rights, racism and civil liberties]