labor "We Will Not Sit on the Sidelines": John Legend’s Proposal for Ending Mass Incarceration

In the past, unions sometimes shied away from knocking down systematic injustices, especially with regard to race. Not anymore. This is not the labor movement from last century. We will not sit on the sidelines. #FREEAMERICA is committed to joining others who are on the ground, doing the work to fix our broken criminal justice system. We are committed to standing with workers who are already in our schools standing between young people and the criminal justice system. 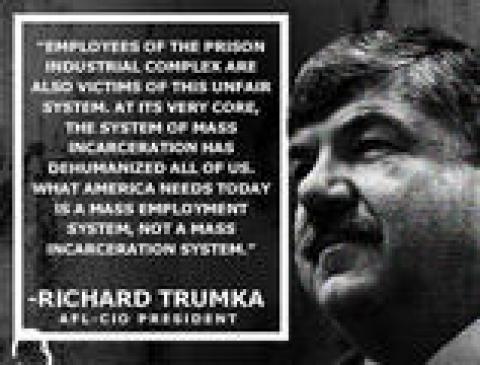 I was fortunate to grow up in a union household. I know how important they are for families and communities.

I know the power unions have to organize politically on behalf of important causes. That’s why it’s so significant that the AFL-CIO, one of the largest unions in the country, has partnered with my organization#FREEAMERICA to end the harmful, immoral and unjust cycle of mass incarceration in the United States.

I don't take it lightly that AFL-CIO members have decided to organize to end mass incarceration. In 2013, the AFL-CIO’s Executive Board passed Resolution 17, which formally recognized the issue of mass incarceration and made a long-term commitment to reforming the entire criminal justice system.

In 2014, both #FREEAMERICA and the AFL-CIO played a role to help pass California’s historic Proposition 47, a voter initiative that impacted more than 1 million people and led to the largest record change effort and release of our loved ones from prisons in United States history.

Union members decided to take a strong stand to fix our broken criminal justice system because they come from communities that are most affected by mass incarceration. American Federation of Teachers (AFT) members work in our most challenged schools—those same schools are heavily affected by school-to-prison pipelines. Correctional officers and prison staff represented by the AFL-CIO are doing hard work, sometimes without the necessary training and support, and sometimes in unsafe, overcrowded conditions.

On a recent visit to Washington state’s Corrections Center for Women, #FREEAMERICA and a delegation of 30 labor leaders from the AFL-CIO talked to people serving time, to counselors, correctional officers and other facility staff. We spoke to people with a range of backgrounds and stories, but the overarching narrative is this system isn't working and that we've become too punitive as a society.

When those who have paid their debt to society cannot find housing or a job, the entire economy suffers. And when a generation of young Americans advance through our prison system instead of our school system, we lose ground in the global economy.

While at the prison, both groups visited the Trades Related Apprenticeship Coaching Program, a state-accredited pre-apprenticeship effort involving the Laborers (LIUNA), Carpenters and Ironworkers unions. Through a 16-week program, inmates learn the tools and techniques necessary for a specific trade. According to TRAC's figures, those who participate in that program are far more likely to be working three years after release than ex-offenders who do not receive similar training.

We talked with a 56-year-old woman who’s been in and out of prison most of her life because of drug addiction. But when given the chance, she enrolled in an apprenticeship program and is committed to getting a union job upon release, regaining custody of her children and rebuilding her relationship with her family. The pride she takes in her newly acquired skills, the way she lit up when she led us on a tour of her workstation, filled us with hope that she was finally on a sustainable path to being a leader in her community.

The messages I heard during our visit are best captured in a letter from inmate Denise Maltos to her elected leaders. In it, she wrote, "Even though I am incarcerated, I still have a dream for myself. I want to get out and make a living wage working as a laborer. I want to be able to support my family and perhaps buy my own house. I want to be free and not discriminated against because of my past crimes."

A majority of those serving time will be released back into the community, often facing the same economic and personal challenges that helped create their incarceration. They deserve a path to redemption that includes access to jobs, education, housing, credit and all the components of a better life. They also deserve to fully participate in our democracy, including the right to vote.

Worker advocates are leading on these issues. In the past, unions sometimes shied away from knocking down systematic injustices, especially with regard to race. Not anymore. This is not the labor movement from last century. We will not sit on the sidelines.

At its very core, the system of mass incarceration has dehumanized us all, not least of all the workers who spend their days inside, who may get to go home after their shifts but are trapped in a failed system that makes us all less safe.

John Legend is a Grammy and Academy Award Winning Singer and Songwriter.