The EU and Other Neoliberal Nightmares

Neoliberal policies and practices dominate the European Commission, European Parliament, European Central Bank, European Court of Justice and a compliant media legitimises the whole conquest. This has left the EU constitution as the only one in the world that enshrines neoliberal economics into its text. Therefore the EU is not – and never can be – either socialist or a democracy. 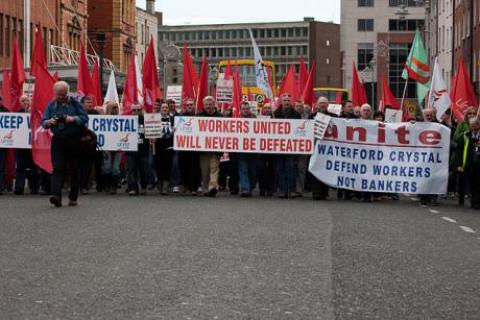 Voting to leave the EU is a no-brainer for the Left. The European Union is remote, racist, imperialist, anti-worker and anti-democratic: It is run by, of, and for the super-rich and their corporations. A future outside austerity and other economic blunders rests on winning the struggle to exit the EU, removing us from its neoliberal politics and institutions. Corporate bureaucrats in Brussels working as agents of the big banks and transnationals’ now exert control over every aspect of our lives. Neoliberal policies and practices dominate the European Commission, European Parliament, European Central Bank, European Court of Justice and a compliant media legitimises the whole conquest. This has left the EU constitution as the only one in the world that enshrines neoliberal economics into its text. Therefore the EU is not – and never can be – either socialist or a democracy.

Against the left’s strategic case for exit is relentless blither and blather from the elitist liberal commentariat: the EU is a social-democratic haven that protects us from the nasty Tories is their litany and verse. This is an absurd fantasy: by design the EU is a corporatist, pro-capitalist establishment. Therefore, it strains credulity that the bulk of the Parliamentary Labour Party and a rump of the trade union movement believe in the myth of Social Europe. The late Bob Crow was bang on the money when he said: “social EU legislation, which supposedly leads to better working conditions, has not saved one job and is riddled with opt-outs for employers to largely ignore any perceived benefits they may bring to workers. But it is making zero-hour contracts and agency-working the norm while undermining collective bargaining and full-time, secure employment.”

The only thing that should remain is the truth: a social Europe was never part of the European Union super-state project. How could it be? The EU has always travelled on the “free trade” train alongside “free” movement of capital, business-austerity, flexible labour markets, low pay, privatisation of public services and the eradication of welfare states. These were not just random policy proscriptions, but specifically designed by ‘free-market’ fanatics. It was the deepening and integration of the EU project that allowed unelected policy makers, driven by the powerful EU corporate lobby, to circumvent and eradicate the social rights that were won by workers in the aftermath of World-War-Two. Creating democratic deficits in all the EU institutions and policy-making by unaccountable technocrats enabled and accelerated this process of dismantling rights. This arrangement ensured the neoliberal Holy Trinity of public spending cuts, privatisation and the removal of trade union rights could be enforced with little contestation.

It’s worth noting the continuity of contempt by the European Union elites towards public opinion. Jean Monnet the founding father of the EU understood democracy was an obstacle to the elitist project and had to employ a degree of deception: "via money Europe could become political in five years" and "…the current communities should be completed by a Finance Common Market which would lead us to European economic unity. Only then would … the mutual commitments make it fairly easy to produce the political union which is the goal." Jean-Claude Juncker, today’s unelected EU chief makes clear that nothing much has changed, “when it becomes serious, you have to lie”. “There can be no democratic choice against the European treaties.”

Neoliberal logic is insidious and some trade union leaders in Britain seem bewildered by it all and continue to argue that some kind of utopian Social Europe exists, offering protection for workers in Britain. In reality the Social Chapter, while it potentially gave some extra legal protection on a few issues, was never much more than crumbs: a gesture to disguise the reality of the European Union as a bosses union. What protects workers in Britain is not the social rights from benevolent bureaucrats in Brussels, but our collective strength and ability to organise and take action.

It was organised struggle by workers’ and their trade unions in Britain that created the 1948 Factory Act, the 1970 Equal Pay Act and so on right through to the National Minimum Wage. To argue that we would lose our right to annual leave if we left the EU is ludicrous and just another part of the Remain project-fear campaign. We’ve had holiday pay enshrined in UK legislation since 1938, and if the Tories were desperate to withdraw these rights, why haven’t they at least scaled them down to the EU minimum in their six years in power? The answer is democracy. Unlike the unelected European Commission, the Tories face the British public at the ballot box at every general election. And lets be honest, even Eton Tories know withdrawing employment rights isn’t a vote winner.

The consolidation of the EU treaties and judicial rulings into the European Constitution – renamed the Lisbon Treaty – meant even the concept of a Social Chapter was the stuff of Alice in Wonderland. EU member states that have been ‘bailed out’ – the bailout funds actually went to French and German banks – by the troika have suffered the biggest fall in collective bargaining rights in the world. According to the International Labour Organisation (ILO) collective bargaining rights have fallen by an average of 21% across the ten EU countries hardest hit by the economic crisis, and have fallen by a massive 63% in Romania and 45% in Greece. The anti-trade union laws and polices passed and implemented in the UK are actually just regional versions of the articles laid down in the Lisbon Treaty. The message is clear: the EU is no place for trade unionists.

The EU is also no place to be young. In fact they have most to lose if we remain in the EU. An over competitive education system, the closure of vital youth support services and the introduction of student loans has meant that young people have fewer opportunities than their parents generation. With the EU being the world’s low growth region, with 23 million unemployed, the social fabric is deteriorating at an alarming rate. In some EU countries youth unemployment has pushed northwards of 50%. Outside of the EU we would be able to prioritise building a society without unemployment and with secure, skilled, well paid jobs. We would be able to tackle the unaffordable housing market and enable young people to develop again free from the chains of debt. Young or old: the toxic mix in the EU of low growth, low productivity and mass unemployment means a bleak future.

The EU is no place for internationalists either. It is a racist ‘Fortress Europe’ project doing everything it can – including allowing refugees to be shot or drown in the Mediterranean every day – to prevent those fleeing from Syria and neighbouring countries being able to enter the EU. Those who do get to EU shores end up locked away in brutal concentration camps. Those at the sharp end of EU trade policy have also been brutalised. The EU conducts economic terrorism on a global scale through aggressive global trade policies and structural adjustment conditions, in particular towards African states. This has served only to deepen their poverty and inequality whilst enriching the white EU 1%. Nor does it build meaningful solidarity between EU states; through the lens of Greece and Germany we see tensions not witnessed since 1945.

Inequality and intimidation doesn’t just exist between the EU and the so-called developing nations either, but the strong EU economies such as France and Germany prey on what they call the ‘peripheral countries’ in Southern and Central Europe. The institutions of the EU have relentlessly and very deliberately imposed the misery of neoliberal austerity and privatisation on these economically weaker countries. Governments across the EU have used EU Treaty rules as cover for this robbery of public wealth.

Real internationalism is workers’ solidarity throughout Europe. The working class are facing the same fight against low pay, casualisation, cuts and privatisation in every country of the EU. Right across the EU workers are hoping the UK exit so they too can demand referendums. There is no doubt a successful UK exit would have huge support, and be emulated, across the continent. That is why the bankers and institutions of the EU were so desperate to force the Syriza government in Greece to its knees: in order to demonstrate to workers in other EU states the fate that would await them should they demand democracy and an end to austerity. It may have backfired. The Syriza government’s capitulation has forced the Greek working class to demand Grexit. If Syriza had only stood firm and implemented the socialist policies it got elected on it would have been kicked out of the Eurozone and even the EU, but by developing a real alternative to austerity it would have inspired millions of EU workers to demand their liberation.

The social disintegration, economic decline and democratic deficit across the EU seem to surprise some. They should not. The major EU policy initiatives such as the Single Market Strategy, European competition policy, Economic and Monetary Integration and the Growth and Stability Pact have put “free” trade and “free” capital mobility, fiscal restraint and business-austerity before the collective interest. In other words the 1% always come before the 99%: the employers always come before the workers. Only in Pinochet’s Chile – where democracy was also absent – have we seen such an embedded programme of neoliberalism. It ruined Chile’s economy too.

A new multi-nation survey from Pew Research Centre finds that Euro-scepticism is on the rise across the EU. It found the EU’s image and stature has been in rapid decline in recent years. In a number of nations the portion of the public with a favourable view of the Brussels-based institutions have fallen markedly in recent years as the economy collapsed. Nevertheless, dogged by defeatism and despair some on the left are terrified of Tory mavericks Gove and Boris. They should recognise that by voting to Remain, these buffoons will still be around. Moreover, they should ask why Cameron, Osborne, the CBI, IMF, WTO, World Bank, US and the entire armoury of finance capital want Britain to Remain. To improve workers rights? Don’t think so. From Yannis Varoufakis to Caroline Lucas – there is no shortage of postmodern opportunists lining up to claim it is better to stay in the EU and try to reform it. What they don’t have – and can’t have – is a strategy. The EU constitution doesn’t allow it.

The late Tony Benn summed up the whole issue: "We are discussing whether the British people are to be allowed to elect those who make the laws under which they are governed. The argument is nothing to do with whether we should get more maternity leave from Madame Papandreou (a European Commissioner at the time)".

For those still struggling to understand why we must leave the EU: It’s democracy, stupid.

Enrico Tortolano is campaign director for Trade Unionists against the EU. He also works as a freelance journalist covering European and Latin American politics. He designs and tutors courses on a wide variety of trade union issues including political economy and International solidarity. He is regularly published in political journals such as Tribune, Alborada and the Morning Star, and a number of academic periodicals.

This article is published under a Creative Commons Attribution-NonCommercial 4.0 International licence. If you have any queries about republishing please contact us.