books Can We Combine Intersectionality with Marxism?

While a sharp contribution to discussions of women's oppression and liberation, the book under review is faulted for not demonstrating the actual radical connection between class and other forms of oppression. While rejecting a tendency to reduce Marxism to a one-dimensional critique of class, the book's author is faulted for downplaying the limits of intersectionality as not articulating--but instead fudging--the existing gulf between identity politics and Marxism. 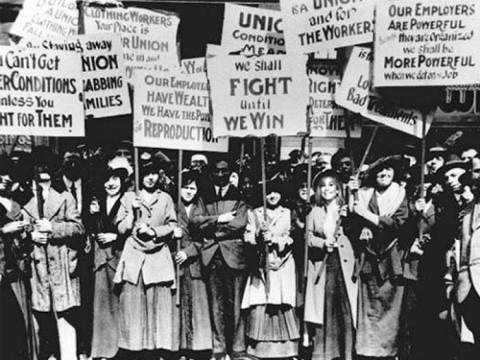 Neoliberal austerity is impacting particularly hard on women. Capitalism relies on women not just directly as workers who generate surplus value but also to provide the primary carers for the next generation of workers and increasingly for the sick and elderly as social service cuts bite. Reproductive rights face serial attacks and domestic violence and other forms of endemic sexism in capitalist society mean that the fight for women’s liberation and, in the shorter term, the fight to defend those rights women have won so far from being rolled back remain key issues for socialists.

This revised and retitled edition of Sharon Smith’s book, originally published in 2004 asWomen and Socialism: Essays on Women’s Liberation, ought therefore to be a valuable addition to current debates on women’s oppression and liberation in the neoliberal age. In her preface Smith sets out her motivation for this new edition. She writes:

The self-identified women’s liberation movement of the 1960s and 1970s was composed not only of liberal, predominantly white feminist organisations but also of socialist feminists and Marxist feminists, as well as Black feminists and other feminists of color…my thinking on feminism has evolved significantly since [the book] was first published in 2004. While I still think much of the book remains useful, its main treatment of “feminism” focused almost exclusively on critiquing its white, middle-class wing. I felt a strong need to correct that error, which would necessarily involve a serious study of the feminist movements described above (p ix).

Her starting point in this re-examination has been an examination of Lise Vogel’s interpretation of social reproduction theory, itself an attempt to develop a unitary theory of production and reproduction which has been recently critiqued by Nicola Ginsburgh in International Socialism144.

As such, despite it being quite US-centric, this edition of Women and Socialism is well-written and should have much to commend it as an updated contribution from a Marxist perspective to discussions on women’s oppression and liberation.

However, it is a truism that effective political activity flows from clarity of theory and analysis. Much that has been written in the Marxist canon on “the woman question” by classical Marxists like Karl Marx and Frederick Engels, Lenin, August Bebel, Clara Zetkin, Alexandra Kollontai and in the debates from the 1960s onwards around second-wave feminism, undeniably has to be understood, clarified and applied in the light of the subsequent experiences of class struggle, structural changes in capitalism, the neoliberal assault on the working class and resistance to oppression.

This is something that the International Socialist tradition has engaged in through the pages of this journal and elsewhere, not least with the publication of Judith Orr’s Marxism and Women’s Liberation lastyear. It is surprising, therefore, that Smith does not discuss or in some cases even reference important contributions made, for example, by Lindsey German in Sex, Class and Socialism (1989, 1994), who examined the re-emergence of the working class family, and others such as Chris Harman, Tony Cliff and Sheila McGregor who have been part of that tradition. Cliff, for example, specifically wrote on the failures of middle class liberal feminism to address the different experiences of black women in and after slavery. All these writers have articulated a robust defence of Marxism and class struggle as essential to women’s liberation without falling into the economic reductionism of which Marxists have so routinely (and often wrongly) been accused by feminists.

The main problem with this edition of Smith’s book, in my view, is that while it is ostensibly a defence and articulation of Marxism and women’s oppression, in its failure to engage with or acknowledge key sources in our shared political tradition and in some theoretical concessions to feminism, it unfortunately represents a step backwards from the International Socialist tradition. Oddly, I could find no mention of privilege theory in Smith’s book yet it is a notion that Marxists must address since the consequence of accepting it is to obscure an understanding of the real roots of women’s oppression as well as the necessary collective means to overcome it.

None of this can surely be due to oversight. It is compounded by a failure to draw clear enough distinctions between feminism and Marxism, including in the political concessions Smith makes to intersectionality.

This is all the more unfortunate since in recent years Marxist feminist and socialist feminist writers from first and second wave feminism are being revisited by some feminists and thinkers around matters of sex, sexuality and gender (and gender non-conformity) and there is greater willingness to acknowledge the limitations—in terms of both theory and praxis—of identity theory approaches. The latter emerged as part of the postmodernist retreat from Marxism and revolutionary class struggle from the 1970s onwards.

There has been a reassessment and at least partial rejection of the postmodernist theoretical framework articulated by Ernesto Laclau and Chantal Mouffe in Hegemony and Socialist Strategy (1985). These developments were usefully summarised in David McNally’s and Susan Ferguson’s introduction to the re-issue of Lise Vogel’s Marxism and the Oppression of Womenin 2014.

Many of today’s third-wave activists thankfully reject the separatist, essentialist, gender-binary and trans-exclusionary ideas of some elements of second-wave feminism and have asserted (sometimes over-asserted) more social constructionist approaches to understanding women’s oppression. Queer theory, associated with Judith Butler and others, was one attempt to move away from this assimilationist essentialism in order to reassert an element of radicalism and a rejection of heteronormativity and later homonormativity, an attempt which itself has in recent years been critiqued for its individualist idealism and rejection of class as the defining relationship in capitalism.

Some writers today seem more open to materialist and even Marxist explanations of women’s oppression and there is discussion of the material and ideological role of the family, the role of women in capitalism and how these relate to exploitation and the need for the struggle for women’s liberation to go beyond a reformist fight for women’s rights.

In this context it is therefore crucial that Marxists do not accommodate theoretically to flawed or inadequate theory which will lead activists away from recognising class as the fundamental antagonistic divide in capitalism and that working class agency through collective class struggle is the key to addressing both exploitation as workers and oppression as women.

It is not that Smith is unaware of the limitations of identity theory and liberal feminism. She defends the ideas of Marx, Engels, Kollontai, Zetkin and others and she offers cogent critiques of identity theory approaches. She approvingly quotes a range of recent Marxist feminists, such as Martha Gimenez, Susan Ferguson and Teresa Ebert. However, in her subsequent treatment of the currently popular notion of intersectionality, first promoted by Kimberlé Crenshaw in 1989, she makes unnecessary and unfounded compromises with identity theory. On p159 she comes to the crux of the issue. “Intersectionality”, she writes, “is a concept describing the experience of oppression, not a theory explaining its cause(s)”. This is ­uncontentious, but then she continues: “It can therefore be applied to a variety of theories, from those informed by Marxism to those influenced by postmodernism.” This is very problematic as it fudges the gulf between identity theories and a Marxist approach to women’s oppression and liberation.

Smith accepts that early identity theories too readily encouraged separatism, individualism, movement fragmentation, reformist practice and accommodation within capitalism. But intersectionality remains a concept at the heart of identity theory approaches and as such is inimical to Marxism if it is imbued with explanatory rather than merely descriptive power. It seems that Smith, however, believes intersectionality has something to offer a Marxist explanation.

Intersectionality was originally proposed as a part of a critique of liberal feminism and a demand that white feminists should recognise that women’s oppression can play out in very different ways if you are black and/or lesbian, for example. For instance, the racism faced by black women often remained unacknowledged by their white feminist sisters at the time, as Marxist writers such as Angela Davis pointed out. Since then intersectionality has been used to describe the effects of interacting sets of oppressions that individuals may experience. This may be useful in “naming the reality” of multiple oppressions and acknowledging the real experiences of black and LGBT+ or disabled women, for instance. But it also shares the disadvantage fatal to all identity theory approaches, a lack of any recognition of class struggle as the motor of history. If class oppression is included at all it is only as one among a number of possible oppressions to which individuals may be subject. It becomes a mere descriptor rather than an exploitative relationship.

The practical politics flowing from a theoretical acceptance of intersectionality’s supposed explanatory power amounts to the demand that we develop self-awareness and “check our privilege”. Privilege theory, defined by Esme Choonara and Yuri Prasad in this journal as “the idea that oppression works through a series of unearned advantages enjoyed by those who do not suffer a particular oppression”, has seriously individualising and divisive consequences.* It undermines the drive to solidarity which is the key to building political movements that can challenge the bosses or capitalism itself.

At a time when we have opportunities to work in anti-austerity united fronts and in fighting racism and Islamophobia alongside feminists, trade unionists and campaigners for women’s rights as well as seeking to develop the clearest possible theoretical understanding of the oppression and exploitation of women, unfortunately Sharon Smith’s book disappoints through having serious limitations for advancing the clarity of understanding of women’s oppression and the need for women’s liberation.

[Laura Miles is a retired member of the University and College Union (UK).]