food A Rush of Americans, Seeking Gold in Cuban Soil

American bureaucrats, seed sellers, food company executives and farmers seek the prizes that are likely to come if the United States ends its trade restrictions against Cuba. 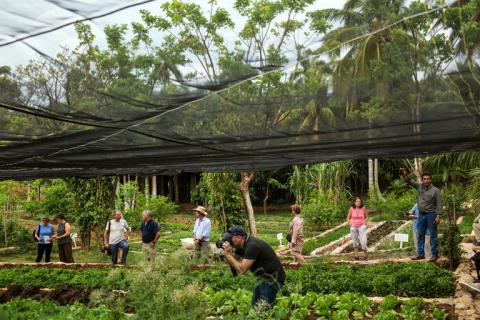 The premier organic farm in Cuba, called Finca Marta, is in the countryside, a half-hour’s drive from Havana. Some 25 different crops are grown in a system of tiered beds. The black screen protects the plants from the tropical sun. ,Lisette Poole for The New York Times

HAVANA — Being an agricultural official in Cuba these days is like living in a resort town all your friends want to visit. You rarely get a moment to yourself.

For months, Havana’s government offices and its prettiest urban farms have been filled with American bureaucrats, seed sellers, food company executives and farmers who spend their evenings eating meals made with ingredients often imported or smuggled into restaurants that most Cubans can’t afford.

They seek the prizes that are likely to come if the United States ends its trade restrictions against Cuba: a new supply of sugar, coffee and tropical produce, and a new market for American exports that could reap more than $1.2 billion a year in sales, according to the United States Chamber of Commerce.

But for some, the quest is less about the money than about what they say is the soul of Cuban agriculture and how people eat.

“The Cubans are not enthusiastic about a Burger King on every corner or Monsanto being here,” said Representative Chellie Pingree, a Democrat from Maine and an organic farmer.

In May, Ms. Pingree led a coalition of organic industry leaders, chefs and investors on a five-day trip here. Their mission, in part, was to encourage Cuban officials to resist the enticements of larger, more conventional American food and farming interests and persuade Cubans to protect and extend the small-scale organic practices that are already a part of their daily life.

Cuba, it turns out, is a rare oasis of organic and sustainable agriculture. For reasons of politics, geography and philosophy, the nation was forced to abandon much of its large-scale, chemical-based farming and replace it with a network of smaller farms and more natural methods.

Shortly after the revolution in 1959, Cuba began sending sugar, tobacco and research to the Soviet Union in exchange for a steady supply of goods that included food, agricultural equipment and farm chemicals. But 30 years later, when the Soviet bloc crumbled, the shipments ended.

Without gasoline and spare parts, tractors sat idle in fields. Crops rotted and cattle died. Studies show that the average Cuban lost more than 12 pounds during what President Fidel Castro called the “special period in time of peace.”

To be sure, Cuba still imports 60 percent to 80 percent of its food, the United States Department of Agriculture estimates, and little or none of it organic. Agricultural chemicals are imported from other countries without trade embargoes. The Cuban government owns about 80 percent of the land the nation could use to grow food, but more than half remains fallow. It is unclear how much of the produce Cuba grows would qualify as organic under United States standards.

Still, a cohesive organic movement is growing. By its own estimates, Cuba has almost 400,000 urban farms, among them about 10,000 small organic ones. The government continues to turn land over to independent farmers to lease, although it requires most to grow food for the state.

For the group of organic true believers who traveled here in May, the dream is to help Cuba stay loyal to a sustainable style of agriculture that rejects chemicals and genetic modification. They point to an incentive: an American market hungry — and willing to pay a premium — for organic produce.

Although only 5 percent of all food sold in America is organic, those sales last year grew three times as fast as those of the overall food market, according to the Organic Trade Association. Cuba offers a new source to feed the demand for organic sugar, honey, fruit and other raw ingredients.

Yet Cuba also offers 11 million potential new customers for conventional agriculture. Just days after Ms. Pingree’s group left, the U.S. Agriculture Coalition for Cuba, which had already been working in the country, returned.

Founded in 2015 to promote normalizing American relations with Cuba, the group has more than 100 members, including corporations like Butterball and Cargill, commodity associations like corn refiners and soy growers, and several state farm bureaus.

The delegation returned home holding an agreement with Cuba’s Grupo Empresarial Agrícola to re-establish Cuba as a market for American agricultural products. In a follow-up stroke, Gov. Jay Nixon of Missouri announced on May 30 that Cuba had accepted a 20-ton donation of long-grain rice grown in his state. The last official shipment of United States rice to Cuba was in 2008.

Although many in the organic industry see the coalition as a threat to their cause, its leaders say they share the same goal: to help Cuba feed itself and improve its agricultural practices.

“There’s not tension, because at the end of the day, this is about how the Cuban farmer is going to raise their productivity and make their own choices,” said Devry Boughner Vorwerk, a former Cargill executive who is now the group’s director. “The key point here is that there is room enough for everyone.”

Doug Schroeder, a soybean farmer from Illinois, came along on the coalition’s trip. His state ships about $20 million worth of corn and soy to Cuba every year under the complex set of rules governing trade between the two countries. If the United States ends its financial embargo with Cuba, that figure could jump to $220 million.

“You multiply that for the entire country and all agriculture sales, and it’s a big deal,” he said.

He anticipates a big market for organics, too, but one in which Cubans provide food for America. The organic industry, he said, “may be going into the back door of a gold mine here. It would be interesting if they could ship organics to the U.S. to satisfy our demand, and we could ship them the goods we do well.”

The secretary of agriculture, Tom Vilsack, seems to be walking the middle of that line. The agreement he signed with his Cuban counterpart, Gustavo Rodríguez Rollero, during President Obama’s historic visit in March included a nod to sharing research on both styles of agriculture.

And when Mr. Vilsack took Mr. Rollero on a tour of Iowa this month, they visited both an organic farm and DuPont Pioneer, the nation’s largest producer of hybrid and genetically modified seeds.

Those who support organic farming say there is something larger at issue than just trade. Adopting chemical-based farming methods used by large agricultural companies that have been visiting Cuba may seem a lucrative proposition, they say, but it would threaten the organic potential of thousands of acres of fallow farmland in Cuba.

“That is a system of the past,” Gary Hirshberg, the chairman of Stonyfield Farm yogurt company and a leader in the effort to label food with genetically modified ingredients, told Cuban officials during the May trip. “We are the industry of the future.”

Still, that future, organic or not, is most likely a long way off. Cubans interviewed during the trip organized by Ms. Pingree said their country was not prepared to handle a flood of new trade. Cuba’s agricultural system remains so antiquated that even seeds and wheelbarrows are in short supply. The rules for doing business, even for farmers and people trying to start wholesale markets, seem to shift weekly.

“Everybody is adequately sober about the realities of this,” said Laura Batcha, the executive director of the Organic Trade Association.

Mr. Schroeder, the soybean farmer, had the same impression. “I got the feeling they don’t want a Starbucks on every corner,” he said. “They don’t want to be Hawaii. They want to maintain their heritage, but at the same time, they realize they have a lot of need.”

There are other complications. Farmers in Florida and other states who grow food suited to tropical climates are already pushing back against a potential competitor. American shoppers with anti-Castro views are probably not going to embrace Cuban products, even something as benign as fresh-cut flowers, which Juan Núñez, the regional president for Whole Foods who traveled to Cuba with the organic group, thought might be a likely starting point for import.

The agriculture department has yet to even secure office space in the new United States embassy here. And despite Mr. Obama’s push, efforts to lift trade sanctions are moving slowly in Congress and are bogged down in the run-up to the election.

On Monday, Nespresso announced that it would be the first company to sell Cuban coffee in America since the revolution. Through a deal brokered with help from TechnoServe, a nonprofit development organization, pods of Cuban-grown Arabica coffee Nespresso is calling Cafecito de Cuba will go on sale for a limited time in the fall.

People who trade in organics say they, too, are likely to start small. Coffee is a possibility, as is charcoal made from marabú, a thorny, invasive tree that has stymied farmers trying to clear land. The high-quality charcoal has caught on in Europe.

And then there is sugar, especially organic sugar, which is in high demand by American processors. What if raw, organic Cuban sugar became an indispensable ingredient for craft cocktails, Ms. Pingree asked during a stroll through a Havana neighborhood. That could turn public opinion enough to sway Congress.

“It sounds frivolous, but some doors open in moments,” she said. “At this point, we are looking for little paths to move this forward. It’s hard to know which ones they will be.”

Ultimately, the future of Cuban agriculture will be decided in Cuba. Despite their reliance on imported, often poor quality food supplemented with state-issued rations, Cubans have long associated food and farming with health, and have a deep love of cooking — especially with anything grown in Cuba, said Imogene Tondre, an American-born culinary researcher living here.

Cuban chefs are already seeking out better quality food and exchanging ideas with American peers. One of them is Tom Colicchio, the New York chef and television personality who has become active in American food politics and traveled with Ms. Pingree to Cuba.

In meetings during the May trip, he urged Cuban officials to build on the nation’s extensive organic research and the cultural desire for local food, and to resist the monetary lures of big agriculture. “We ask that you have the political will to reject that and continue to do what you are doing and know that there is a market for it,” Mr. Colicchio said in an impassioned plea.

Moraima Céspedes Morales, director of international affairs in Cuba’s Ministry of Agriculture, told him to stay calm. “We are trying to produce the healthiest food possible,” she said. “All the pressures, they don’t matter.”

What matters to Cubans, she told the group, is neither American market pressure nor the battle over which style of farming is better.

“The most important program for us,” she said, “is still one of self-supply.”

Correction: June 20, 2016
An earlier version of this article misstated the position held by Moraima Céspedes Morales. She is director of international affairs for Cuba’s Ministry of Agriculture, not for Cuba.