books Left of the Left: My Memories of Sam Dolgoff

This memoir by physics and geology professor Anatole Dolgoff of his father, IWW activist Sam Dolgoff (1902-1990), beautifully captures the aura of the anarchist and related movements in the United States in the latter half of the 20th century, says reviewer Peter Cole. 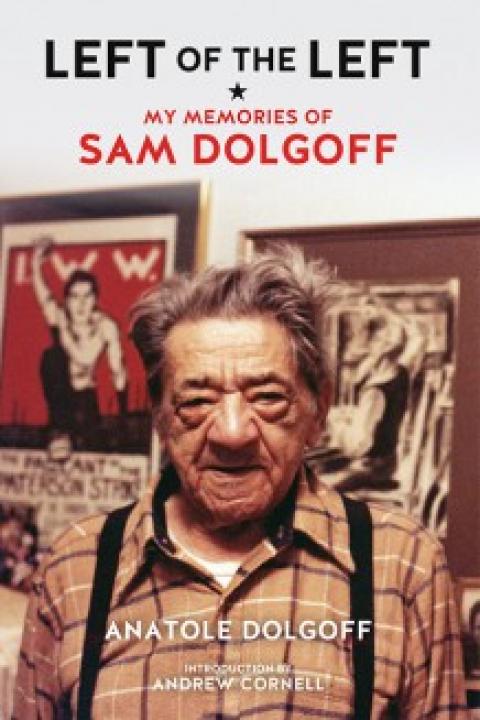 If you want to read the god-honest and god-awful truth about being a left-wing radical in 20th century America, drop whatever you're doing, pick up this book, and read it. Pronto! If you're not crying within five pages, you might want to check on whether you've got a heart and a pulse. Anatole Dolgoff's love, admiration, and memories of his father saturate the pages, making it required reading for folks interested in the Wobblies, anarchists, workers, unionists, New Yorkers, Americans, non-Americans, un-Americans, and every other human being, for that matter. Make no mistake, the seventy-nine year Anatole Dolgoff might be a first-time book author but he's one helluva a brilliant story-teller.

On the 50th anniversary of the state of Illinois' execution of the Haymarket anarchists, in 1937, Dolgoff shared a speaker's platform with Lucy Parsons, the legendary anarchist, revolutionary, Wobbly co-founder, and widow of Haymarket martyr Albert Parsons.

Dolgoff met Eugene Debs. He knew the writer Eugene O'Neill and the artist Diego Rivera. He was great friends with Dr. Ben Reitman, Emma Goldman's on-again, off-again lover known as the "clap doctor" for treating street prostitutes who had sexually transmitted diseases in an era when no "respectable" doctor would.

Anatole Dolgoff's middle name is Durruti, after Beunaventura Durruti, one of Spain's greatest anarchist fighters who died defending Madrid from the fascists during the Spanish Civil War (more on Spain, later). The Soviet Union, China and Mexico, the Dominican Republic and many parts of North America figure into Sam's life and Anatole's telling of it.

The book is worth reading simply for the opening chapter. Set sometime in the 1940s, Anatole recounts walking with his father and older brother, Abe, from their Lower East Side apartment across lower Manhattan to get to the Marine Transport Workers Industrial Union 510 (MTW) hall in a decrepit, now-razed loft where they spent many Sundays with old-time Wobbly sailors. I'm a historian of the IWW but in this vignette, as in many others in the book, Dolgoff captured the essence of the Wobblies better than I ever have (I'm ashamed to admit).

Full disclosure: it is because I researched and wrote on the Wobblies that I met Anatole Dolgoff. A few years after my Wobblies on the Waterfront, on Philadelphia's interracial longhsore union, and an edited volume on Ben Fletcher, their "Black Wobbly" leader, I got an email from Anatole. He had known-as a young boy-Fletcher. Here was a man who could tell me stories about the most prominent African American in IWW history because his father and Fletcher were close friends. As a child, Anatole spent quality time with Fletcher and remembered him fondly and well. But let me also confess, and meaning no disrespect, that I had no idea that Anatole's stories were this good or that he could write so damned well!

In addition to capturing the history but also-harder-the feel of many of the Wobblies and other anarchist/left individuals, organizations, and moments, this book is wonderful for those simply wanting to open a window into the past.

Take New York City, an incredible city that justifiably has received countless authors' attentions. Dolgoff poignantly captures the feel of 20th century working class New York, a "lost New York." Lower Manhattan, parts of Brooklyn, the occasional foray into the Bronx. New Yorkers and those who love New York will find much to love about this book as he walks "through lower Manhattan streets not to be gentrified for fifty years" along with the Puerto Rican, Italian, Jewish, and other residents.

Moreover, the language is, well, of a time and a place. Where else, these days, can one read words like "floor moppers" and "sonofabitch"?

As Dolgoff declared near his memoir's start: "What I can do is tell stories: of my parents and their world, which spans seventy years of revolutionary activity. Hopefully it will add up to a history of sorts. Do not look for `objectivity.' To hell with it. I have read many such `objective' accounts of the anarchists and Wobblies, and few of them bear any resemblance to the flesh-and-blood human beings who broke bread with us or snored on our sagging couch. I've opted for the truth instead."

Like so many others, Sam Dolgoff was the son of desperately poor Jewish immigrants from tsarist Russia. Like so many others, they ended up on Manhattan's Lower East Side. As the oldest child, Sam went to work at the tender age of eight, delivering milk off a horse-drawn wagon before dawn. A few years later, his father apprenticed him to a house painter, a trade at which he worked for the next sixty years.

Dolgoff was working class through and through and proud of it, as were nearly all the Wobblies who toiled as Jack tars and timber beasts, gandy dancers and harvest stiffs. First drawn to the Socialist Party and the Young People's Socialist League (YPSL), he abandoned their vision of evolutionary socialism and electoral compromises for the anarchists. A while later, he found his ideological home, the IWW, the great anarcho-syndicalist union founded in Chicago in 1905. Dolgoff believed that revolutionary industrial unionism was the only path to Socialism-at the point of production where workers, people, had real power. He committed himself for the next seventy years to that belief. Anti-capitalist and unrepentant, he never took a job that required him to fire or hire another fellow worker. Supporter of the underdog and the little guy. Hater of the 1% before such a phrase existed. Humanist. Wanting to build a society from within the ashes of the old. Willing to fight for it, strike for it, suffer for it, go hungry for it, help out someone who's even hungrier.

To Dolgoff, capitalism, the State, and organized religion caused most of the world's suffering which was why he became an anarchist. He hated hierarchy, oppression, and the institutions that both caused and perpetuated it so loved the Wobblies. He also loved to sing Wobbly tunes like "Halleliuah, I'm a bum," "Solidarity Forever," and countless other gems.

This historian of the IWW found it especially interesting that Dolgoff's time in it began in the early-mid 1920s. That is, after its so-called hey-day, after the government had arrested and imprisoned most of its most important leaders and deported others, after many states had made belonging to the IWW illegal under unconstitutional "criminal syndicalist" laws, after many local and state police and vigilantes had further beaten and imprisoned Wobblies and shut down their halls, after the lynchings of Frank Little and Wesley Everest, after the Bisbee deportation and Everett massacre. And after the rise of the Soviet Union and Communist Party (CP) that did all in its power to undermine, co-opt, and destroy the IWW for presenting an alternative view of what socialism looked like.

We read about Wobblies in the interwar years, organizing the Unemployed Union in Chicago in the early days of the Great Depression. Anatole actually makes an argument that underneath, behind, to the side of many great Left actions, events, and organizations in the 1920s, 1930s, and 1940s were Wobblies. While perhaps overstating his case, undeniablely many unions, most obviously in the newly-founded CIO, and other progressive organizations were influenced by the IWW.

A great deal of this book is about anarchism, an ideology that attracted Dolgoff. Over time, he became a much-in-demand speaker, brilliant author, and even theoretician of anarchism.

Though he only finished eighth grade, Dolgoff evolved into a great intellectual, schooled by some of the greatest anarchists of the early 20th century. The legendary Russian anarchist Gregorii Maximoff, a man familiar to precious few, made Dolgoff into the man and reader he became. Anatole describes Maximoff as "a man who had faced down the power of Lenin; had come within hours of a firing squad; had conducted a successful hunger strike in the Cheka dungeons; had organized steel mills and peasant collectives; had served as an editor of important journals and, while in Berlin, helped found an international anarchist organization comprising-it may surprise you-several million people." Maximoff and his fellow Russian anarchists who lived in permanent exile made Dolgoff read Bakunin and Kropotkin but also Marx and Lenin as well as Shakespeare and Twain. He read constantly — even after a full day of work and despite having a wife and two sons.

One of the pivotal times in Dolgoff's life, as well as for others on the left was the Spanish Civil War. Recall Anatole's middle name, Durruti. Predictably, Sam was not just a kindred spirit with the National Confederation of Labor (CNT), the anarchist union and spiritual sibling of the IWW. The CNT stronghold of Barcelona proved the high point, early in the Civil War, of the cause. Dolgoff was a leading supporter, propagandist, and fundraiser for the CNT and Spanish Republicans. For those interested in this tragedy and its long shadow, this book offers much.

Some chapters in the book, vignettes really, are amazing stories of people few ever knew about. Dolgoff knew I.N. Steinberg, the "Peoples Commissar of Justice in the Soviet government from December 1917 to March 1918 and a central figure in the drafting of the Soviet Constitution, [who] came to tell us of his private, face-to-face meeting with Lenin in that sparsely furnished Kremlin room where he [literally] forged the communist state. Steinberg had been there to protest the vicious crackdown of the Cheka on all dissent and suspected dissenters. Vanishing people, torture, murder — all without trial or even a hearing." Steinberg was one of many anti-CP leftists who pepper this book.

Dolgoff never gave up on his beliefs nor stopped organizing. For instance, during the height of the Cold War, Dolgoff helped found the Libertarian League that proclaimed: "The `free' world is not free; the `communist' world is not communist. We reject both: one is becoming totalitarian; the other is already so."

Anatole is not uncritical of his father, particularly his father's drinking problems as well as his poor treatment of his devoted, loving wife and life partner, or his falling out with his older son. Anatole also discusses, briefly, his own life and travails though he would be the first to admit that his life mostly has been a good one, greatly enriched by his father.

Anatole wrote this book after retiring, because friends "urged me to put my ghosts and shadows down on paper. And so I have. I leave behind a record of my parents' life and through them a history of sorts, the history of a culture, and of a chapter of American radicalism that few people know about. It is an incomplete and inadequate record no doubt."

I cried at the beginning of this book and again at its end. Since it’s so wonderful, I will not reveal more details-no spoilers here — but suffice that the last few years of Dolgoff's incredible life were as honest and compelling as his first eighty-five. Truly, there is no other way for me to end this essay than Sam Dolgoff, Presente!

[Peter Cole is a Professor of History at Western Illinois University. He is the author of Wobblies on the Waterfront: Interracial Unionism in Progressive Era Philadelphia and currently is writing Dockworker Power: Race, Technology & Unions in Durban and the San Francisco Bay Area. He tweets from @ProfPeterCole ]