"Ludlow: Greek Americans in the Colorado Coal War" and "The Music of Strangers: Yo-Yo Ma and the Silk Road Ensemble" -- two new documentaries, both of them stunning not only in their execution but in their implications, raise all the critical issues about the worth of human life. One takes place in the violent coal mines of the Southwest a century ago, and another takes place today in many locales leading up to appearances in concert halls all over the world. 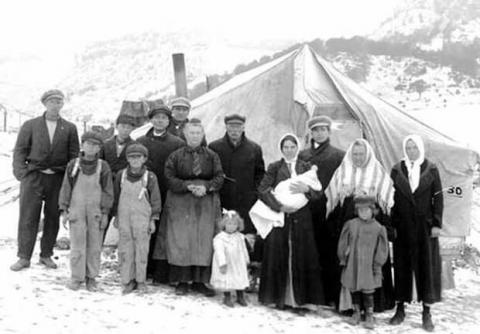 Despite the prodigious efforts expended by the ruling class to erase the memory of the horrific 1914 Ludlow Massacre, the events are well documented in local newspapers of the period.,

“Ludlow”, written and directed by Leonidas Vardaros, premiered this past March at the Thessaloniki International Documentary Festival in northern Greece, and has since been shown to enthusiastic audiences all over the country. The 72-minute film narrates the story of Greek immigrants at the beginning of the last century, many of them Cretans, who ended up in distant Colorado working under inhuman conditions in the coal mines owned by John D. Rockefeller Sr. and Jr. and other mine owners. Together with immigrants from 22 other countries, these sorely exploited miners revolted and wrote a proud page of American labor history, known as the Colorado Coal War of 1913-14.

The immigrants started arriving at the beginning of the 1900s. They were intentionally kept divided by ethnicity in the many Colorado and New Mexico towns where coal mines were located. But they overcame formidable differences in a common movement to join the United Mine Workers of America, helped along by Mother Jones, who appeared on the scene to inspire them. Workers from Italy, Croatia, Serbia and other places already had some exposure to labor struggles and socialist, class-based ideological concepts. The Greeks less so, as the past several hundred years of their history had been consumed with fighting against the Ottomans for their independence. But they did have military experience in that struggle, which came into play as they took up rifles in self-defense against the thugs and goons of company-paid militias, the National Guard, and later U.S. Army troops all aligned against labor.

It is a story not often mentioned in history books – other than those by radical historians. But as the documentary shows, this monumental struggle remains alive in the memory of the children and the grandchildren of the men and their families who fought for their lives and their human dignity. Descendants recount their parents’ history with pride for their forebears and anger over the injustices they faced. Greek-American historian Dan Georgakas speaks with gracious understatement when he says, “Labor relations in America have never been gentle.”

Despite the prodigious efforts expended by the ruling class to erase the memory of the horrific 1914 Ludlow Massacre, the events are well documented in local newspapers of the period, in archival records found in local universities and historical societies, and in the work of dedicated historians and researchers. The film is fleshed out with generously employed period photographs, and with filmed interviews apparently made decades ago by surviving union members and the miners’ children. Aside from old recordings of labor songs, the producers also got the musical group Romiosyni to make a professional recording of the song of the strikers, “The Union Forever,” with instrumentation by Teo Lazarou. It is eerie hearing the English lyrics in Greek accents much like the original union miners must have used.

From these hard-to-find, but rewarding sources the filmmakers collected the evidence to create an engrossing documentary that keeps the viewer’s interest alive from start to finish. The biography of union organizer Louis Tikas – “Louie the Greek” – is especially touching and tragic. The collective team, under the guidance of director Vardaros, consists of cinematographer Prokopis Dafnos, editor Xenofon Vardaros, sound engineer Andreas Gkovas, reasearcher Frosso Tsouka and narrator Rigas Axelos. Other members of the “Apostolis Berdebes” non-profit production company include Stefanos Plakas and Lina Gousiou. It’s obvious this was a labor of love, one might even say a love letter sent to America from our Greek comrades. Every American owes them a debt of gratitude for a film that will remain forever an important reference for students and scholars.

At the time, the murderous events in Ludlow attracted the sympathies of labor all over the country. The name of John D. Rockefeller became synonymous with the worst criminal disasters and atrocities of the capitalist system. Yet within two decades, by 1935, with the passage of the Labor Relations Act, issues such as the eight-hour day, child labor, work safety and working conditions had been officially recognized. 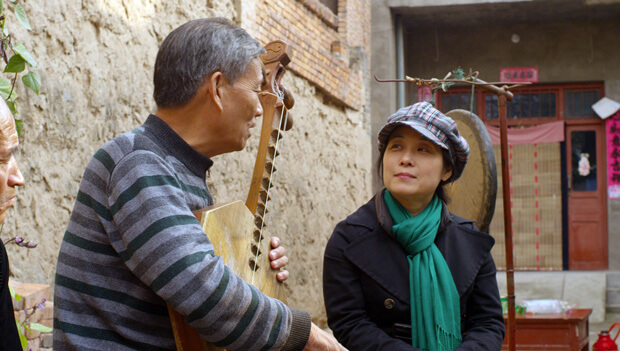 The Music of Strangers: Yo-Yo Ma and the Silk Road Ensemble

Over the past 16 years, an extraordinary group of musicians has come together to celebrate the universal power of music. Named for the ancient trade route linking Asia, Africa and Europe, The Silk Road Ensemble, an international collective created by acclaimed cellist Yo-Yo Ma, exemplifies music’s ability to blur geographical boundaries, blend disparate cultures and inspire hope for peace and global cooperation on the part of both artists and audiences.

You don’t have to be an anthropologist or ethnomusicologist to know that cultures influence each other. To take an obvious example, so-called “Gypsy” music can be heard in every national style from the flamenco of Spain to the sound of the Russian balalaika. And speaking of which, guitar or dulcimer-type instruments can be found in world music almost anywhere you look. Indeed, as Yo-Yo Ma says, “The intersection of cultures is where new things emerge.” Like human genetics, which can suffer from too much inbreeding, culture needs to be allowed to cross-pollinate and grow if it is to survive.

“The Music of Strangers: Yo-Yo Ma and the Silk Road Ensemble” is the latest film from the creators of the Oscar-winning documentary 20 Feet from Stardom and the critically-hailed Best of Enemies. It follows an ever-changing lineup of performers drawn from the ensemble’s more than 50 instrumentalists, vocalists, composers, arrangers, visual artists and storytellers as they gather in locations across the world, exploring the ways art can both preserve traditions and shape cultural evolution.

Blending performance footage, personal interviews and archival film, culled from interviews, rehearsals and concerts by the musicians in some 33 countries, director Morgan Neville and producer Caitrin Rogers focus on the journeys of a small group of Silk Road Ensemble mainstays to create an intensely personal chronicle of passion, talent and sacrifice. Through these moving individual stories, some of them marked by immense pathos, the film paints a vivid collective portrait of a bold musical experiment and a global search for the ties that bind.

Some of the personalities we meet, aside from Ma, include superb instrumentalists such as Kinan Azmeh from Syria, Keyhan Kalhor from Iran, Cristina Pato from Galicia in northwest Spain, and Wu Man from China. The film is perhaps at its best when we focus on their sagas. To me, the single greatest highlight is the young Black man whose name I did not pick up – and I’m not even sure where he is from – who danced a lyrical hip-hop-inflected ballet to Ma’s playing of Saint-Saëns’ “The Swan.” Now there is a genre that simply cries out to be incorporated more widely in larger-scale work: Why not a hip-hop version of Prokofiev’s ballet score to “Romeo and Juliet” or to Tchaikovsky’s “Swan Lake”?

By comparison to these intimate cameos, I felt it somehow less impressive, in the end, to see and hear 20 or 30 musicians all massed on a stage pounding out the exciting, rhythmic pulses of “world music” that has captured the attention of global audiences. Once the beat and the harmonic relations have been established, it’s relatively easily to “zipper” in a riff from a Chinese pipa, then a Galician bagpipe, and so on, extending an ecstatic piece out to hypnotizing lengths. It’s both a dilution of authenticity and an expansion into blandness, neither of which in itself particularly makes musical history, however much fun it can be.

The jumpy, frenetic editing is consistent with contemporary viewing patterns. With so many stories to tell, so many individual personalities to know, and equally as many locales, in the blink of an eye a viewer is transported to dozens of exotic locales, and into the the musicians’ private living rooms and surrounding neighborhood streets. It’s an wild, exhilarating 96-minute ride around the world many times over.
Africa and Europe, The Silk Road Ensemble, an international collective created by acclaimed cellist Yo-Yo Ma, exemplifies music’s ability to blur geographical boundaries, blend disparate cultures and inspire hope for peace and global cooperation on the part of both artists and audiences.

[Eric A. Gordon is the author of two composer biographies: Marc Blitzstein and Earl Robinson. He writes frequently on cultural and political subjects. He is former Chair of the SoCal Chapter of the National Writers Union (Local 1981, UAW).]