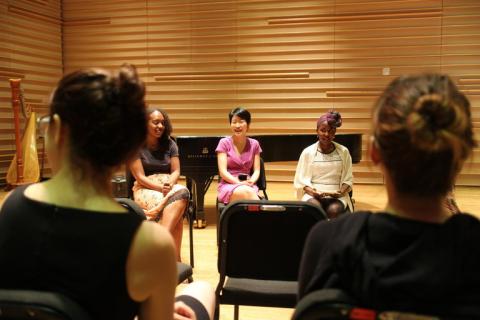 Eun Lee, center, of The Dream Unfinished, has organized an orchestral concert at Cooper Union to benefit the Black Lives Matter movement.,Credit via The Dream Unfinished // New York Times
Classical Music Steps In for BlackLivesMatter
By William Robin
July 10, 2016
New York Times
After last week's shootings, an orchestral concert to benefit the Black Lives Matter movement, scheduled for Wednesday night at Cooper Union, has become tragically timely.
"The reasons why we're having this concert are not good ones," said the clarinetist and music teacher Eun Lee, who has been organizing the "Sing Her Name" event for the past year. "But I am looking forward to a communion of people."
"We need that right now," she added, "rather than us all isolated, looking at our phone screens or computer screens and feeling these feelings all by ourselves."
"Sing Her Name" is the second benefit concert that Ms. Lee has organized as part of the Dream Unfinished project. In December 2014, as activists gathered across the country to protest the deaths of Michael Brown in Ferguson, Mo., and Eric Garner in New York City, both at the hands of police officers, Ms. Lee wondered how she could contribute. "I was sitting on the question, `Is there anything we can do as classical musicians?'" she recalled.
After a series of Google searches along the lines of "classical music black lives matter," it became clear to her that no such project existed. "It just hit me," Ms. Lee said, "that, as much as we were seeing a response from rap musicians and folk musicians and now more and more pop musicians, there was no such response from the classical music community."
So Ms. Lee responded. She rounded up an orchestra's worth of performers to donate their time for rehearsals; created a series of eye-catching videos to promote the project; and partnered with the Center for Constitutional Rights, Justice League NYC and the National Coalition of Law Enforcement Officers for Justice. Three hundred concertgoers attended "The Dream Unfinished: A Symphonic Benefit for Civil Rights" in Lower Manhattan on July 17, 2015, the first anniversary of Mr. Garner's death. Activists, including Mr. Garner's daughter Erica, gave speeches, and the orchestra played music by Leonard Bernstein and William Grant Still.
It is not surprising that Ms. Lee's initial internet searches yielded no results. While classical music institutions have lately addressed issues of diversity - the theme of the League of American Orchestras' annual conference last month was "The Richness of Difference" - they still tend to avoid confronting contemporary racial tensions.
When demonstrators interrupted a 2014 St. Louis Symphony concert to sing "Requiem for Mike Brown," or when, in 2015, Marin Alsop, music director of the Baltimore Symphony Orchestra, spoke of the necessity of the protests that shook her city after the death of Freddie Gray, they were rare and controversial moments in a largely apolitical industry. Classical music tends to frame questions of race in terms of professional and audience demographics, distant from the discussions of police brutality that concern Black Lives Matter.
"The leadership and the personnel rosters of a lot of these major orchestras and institutions are so white. I think some of it is also just their own personal discomfort," Ms. Lee said, adding, "There's a fear of having something to lose, alienating donors or sponsors who are a little more conservative."
But she argued that her project was essentially uncontroversial: "The Dream Unfinished is not really politically motivated, because I feel strongly that the issue of systemic racism and police brutality is something that should be bipartisan."
The theme of this year's benefit, "Sing Her Name," alludes to #SayHerName, an activist movement that raises awareness of the effects of police violence on black women.
"Everyone knows the name Sandra Bland" - who died in police custody in Texas in July 2015 - "but most people don't know that there are five other black women who were killed that same month," Ms. Lee said. Benefit proceeds will go to the Center for Constitutional Rights, African American Policy Forum and Black Women's Blueprint. The orchestra will perform music by African-American and female composers, including Florence Price, Margaret Bonds and Ethel Smyth.
The concert will also feature the premiere of Courtney Bryan's "Yet Unheard," which sets a new text by the poet Sharan Strange memorializing Ms. Bland. "What I'm bringing to it is the emotional side," Ms. Bryan said in a recent interview. "Being able to mourn what happened, but also celebrate her spirit."
A versatile pianist and composer, Ms. Bryan engages with gospel and jazz traditions in her music, and increasingly with politics. Her 2015 orchestral work "Sanctum" incorporates the recorded voices of Marlene Pinnock - who was beaten by a California Highway Patrol officer in 2014 - and protesters in Ferguson. 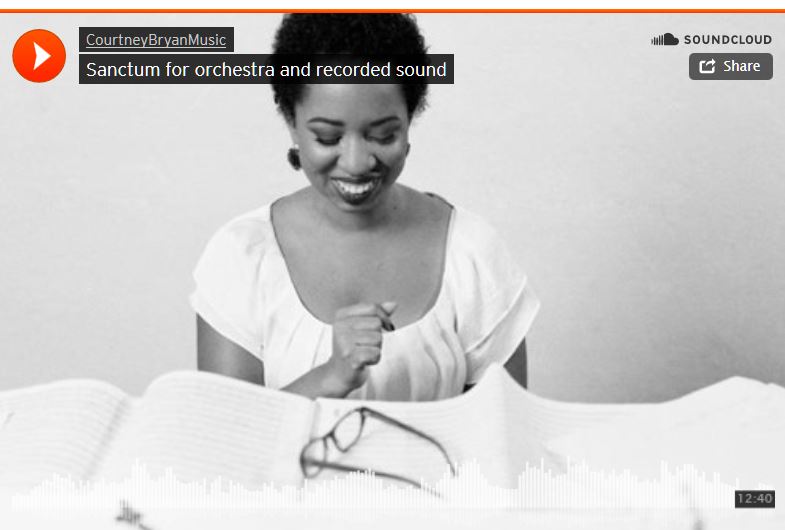 Listen here.
"As I was working on the piece, Mike Brown was killed, and I was following what was happening in Ferguson," she said. "All these different things started becoming part of it, and at some point I had to shut off everything, because it wasn't like the events were slowing down."
Written for chorus, orchestra and the vocalist Helga Davis, "Yet Unheard" also is a call for action. Early in the piece, the choir sings "Break through fear, push back hatred's stone/ It's an honor to protest for her." In an interview, Ms. Davis described the need for artists to participate in social movements. "We're all saying: `What can we do? I don't do anything. I'm not a politician, I don't have a lot of money, I'm not connected,'" she said. "We keep talking about all the things we're not, instead of saying, `But I play piano, or I sing, or I dance.'"
At a workshop rehearsal in May, Ms. Bryan and Ms. Davis sat together at a piano and read through the latest version of the score. At one point, Ms. Davis suggested that a passage in which she sings "Didn't he kill me that day?" be moved an octave lower.
"It's really the last of my breath," she said, noting that the phrase now sat at the bottom of her vocal range. Over a wash of harmony and intoned in Ms. Davis's powerful voice, the line became a haunting accusation. When she repeated the phrase later in the rehearsal, Ms. Davis paused and said, "It asks the question in the way it needs to be asked."
[A version of this article appears in print on July 12, 2016, on page C3 of the New York edition with the headline: Classical Notes Add to Voices of Protest.]
Classical Music Concert `Sing Her Name' Pays Tribute To Black Lives
The performance, set to take place on the year anniversary of Sandra Bland's death, is as important now as ever.
By Priscilla Frank, Arts Writer, The Huffington Post
July 12, 2016
Huffington Post 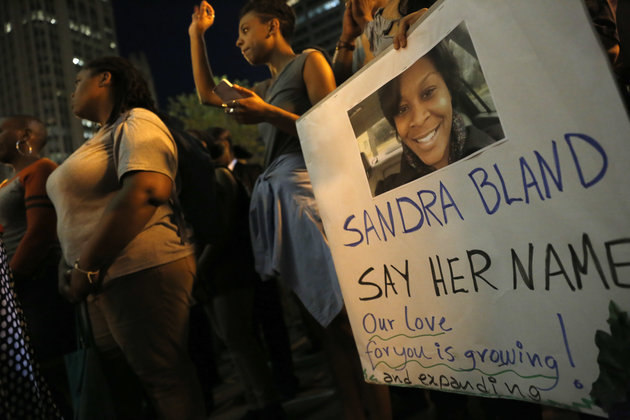 Photo credit: Associated Press // Huffington Post
July 13, 2016, will mark one year since the death of Sandra Bland. Three days after she was pulled over for forgetting a turn signal, and subsequently arrested after a confrontation ensued, Bland was found hanged in a Texas county jail cell. Those who knew Bland vehemently denied she would have taken her own life, calling the prospect “unfathomable.” The same month of Bland’s death, four more black women died behind bars ― Kindra Chapman, Raynette Turner, Joyce Curnell and Ralkina Jones.

On the first anniversary of Bland’s death, a classical music tribute called “Sing Her Name” will commemorate black women impacted by racial injustice, as well as the Black Lives Matter organizers and activists working to expose and end systematic racial oppression. The concert, organized by clarinetist and music teacher Eun Lee and presented by “The Dream Unfinished: An Activist Orchestra,” features a program of music by all-female composers like Florence Price, Margaret Bonds and Ethel Smyth.

This is the second concert Lee has organized around a civil rights issue. In 2015, she helped make “The Dream Unfinished: A Symphonic Benefit for Civil Rights” happen, a response to the deaths of Michael Brown and Eric Garner. While grieving the loss of these two individuals, and questioning the world in which lives are too easily stolen because of the color of one’s skin, Lee said she wanted to help.

Classical music and activism aren’t often witnessed cooperating in a single space,though there are exceptions. The classical music scene can easily be described as traditional, or worse, elitist. The community at large is historically very white, and so the genre might seem untethered to current events or politics, largely because it has the privilege to be able to do so. Lee’s concert is out to change that.

Her 2015 show featured music by Leonard Bernstein and William Grant Still, and speeches by activists including Eric Garner’s daughter Erica. “Music is used as a source to gather people,” “The Dream Unfinished” clarinetist Patricia Billings explained in a video promoting the production. “To invite them to a safe environment to express their true thoughts and feelings about issues. I hope to use my art to create that environment, so we can have those tough discussions about civil rights.”

Sadly, Lee’s homage is as relevant now as ever, coming off a devastating week of violence and loss as issues of police brutality and prejudice within the justice system continue to demand our attention and action. Last week, Alton Sterling was shot and killed by police officers in Baton Rouge, Louisiana, for no other reason than legally selling CDs, becoming the 135th black person killed by police in 2016. Just one day later, Philando Castile was shot dead in his car by an officer in Falcon Heights, Minnesota, after being pulled over by police, becoming number 136.

Although under the darkest of circumstances, “Sing Her Name” presents an opportunity for coming together, mourning and fighting for change.

The orchestral and choral concert featured a world premiere by composer Courtney Bryan, with text by poet Sharan Strange. Grammy-nominated and Grammy-award-winning conductors James Blachly and John McLaughlin Williams led the #SingHerName chorus and The Dream Unfinished Orchestra. Soloists include WQXR's Helga Davis, pianist Michelle Cann, and Kelly Hall-Tompkins of "Fiddler on the Roof," who acted as concertmaster for the performance.

Proceeds will go to the Center for Constitutional Rights, Black Women's Blueprint, and African American Policy Forum.
Subscribe to Portside