Can plant-based burgers really replace the real thing, especially for someone who enjoys meat? Here's what Ione author found in serious taste tests. 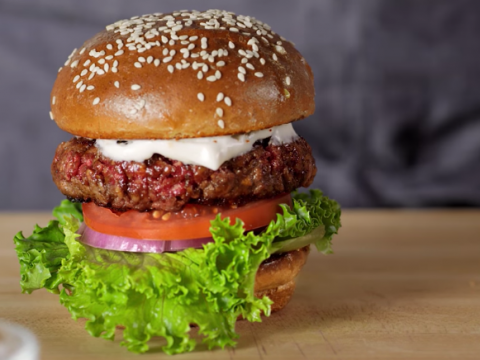 In my head and in my heart, I know I should stop eating meat.

Environmentalists have described beef consumption as the "new SUV" for its effects on climate change, and I've heard the horror stories about livestock mistreatment. But ... every so often I still find myself caving to the craving for a juicy cheeseburger or beef burrito. That's why Impossible Food's mission struck me immediately.

The secret: Plant burgers that look, smell, sizzle, and taste like beef. So can these patties really replace the real thing, especially for someone who enjoys meat? Here's what I found in my first taste test:

"I wanted to pick the most important problem in the world to work on and I decided that, without question, the biggest threat to the global environment right now was the use of animals for food," he said on stage at Code. "And I thought it was a solvable problem." To come up with its answer, the company has reportedly raised about ~$180 million from the likes of UBS and Bill Gates. At the company's shareholders meeting last week, executive chairman Eric Schmidt highlighted fake meat as one of the top technologies that will change the world in the next five to 10 years Uncooked, Impossible Foods' plant meat looks a lot like regular ground beef. Its major sources of proteins are wheat, potato, soy, and yeast. The major fat source is coconut. It also has a couple of plant-derived fibers and micronutrients, with a molecule called "heme" as the magic ingredient that gives it its meaty characteristics.

"You're not going to get anything that appeals to a hardcore meat lover by just mushing together a bunch of vegetables," Brown says. At Vox Media's Code conference in Southern California this year, attendees got to taste Impossible's burgers. You can actually hear the burger sizzling on the grill.  Although there were lots of special foods at the conference, the Impossible burgers had the longest line.

When I finally picked up my sample, it looked and smelled like a regular hamburger, gussied up as it was with all the typical trappings like lettuce and tomato The only real difference I noticed right off the bat was that the top had a special crispness you don't really see with regular meat. To me, that ended up being one of the best parts. A few bites in and I was convinced I could have been eating a real beef burger. Although the burger wasn't quite as succulent as what you'd find at your typical BBQ, it was still thick, tender, and absolutely delicious, with the slight crunch on the outside an unexpected benefit The consensus? I am 100% ready to say goodbye to my occasional cheeseburger in favor of this plant-y replacement.

Unfortunately, though, Brown's first product isn't actually on the market yet.

The team is testing it with different chefs and in small venues across the US, with the goal of shipping the product by the end of the year. At first, Impossible Foods will sell its meat for roughly the same price as organic beef, but Brown expects that in "a couple of years" the company will be able to sell it at a price that's on par with normal supermarket ground beef. Ultimately, he wants Impossible Foods to reach the scale where it can sell its product to people in the developing world for even lower prices.

And fake beef isn't the only thing on the agenda. Cheese, fish, chicken ... for Brown, there's nothing that's not possible.