food The Truth About Big Chicken

When “sustainability” includes social justice, most US chicken gets a failing grade. 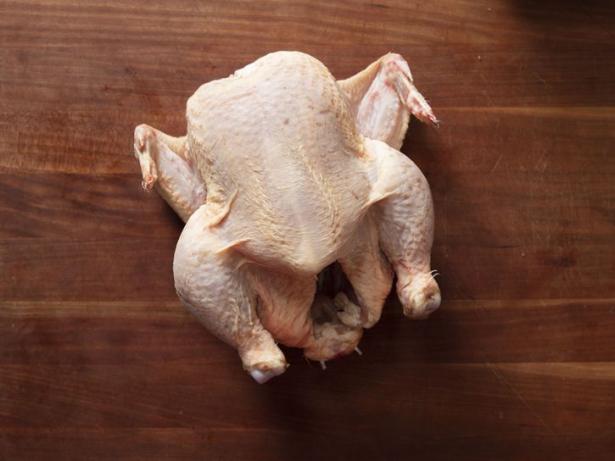 We consume a lot of chicken in this country; an average of nearly 98 pounds per person in 2020, according to the National Chicken Council. , Vicky Wasik

Everyone knows that beef is bad for the planet. The way most beef is raised today is an environmental nightmare—it's resource intensive and disastrous for the climate. All the

methane produced by belching cows, not to mention additional emissions generated in the production of heavily fertilized grains to feed said cows, is depleting the ozone layer. If a consumer is truly concerned about the issue of sustainability, prevailing wisdom says they should forego the steak and choose chicken instead. Right?

Well, that depends on how you define sustainability. If your definition is limited to environmental sustainability, then beef is certainly less sustainable than other meats. But according to an emerging definition of sustainability, one that values the health and livelihood of the people who produce our food in addition to economic and environmental concerns, most of the chicken available in US supermarkets and fast-food restaurants is just as unsustainable as beef. And, in fact, it may be worse.

Even under this expansive view of sustainability, by rethinking our approach to meat consumption overall, even the most ardent Buffalo wing buff can be part of the solution.

We consume a lot of chicken in this country; an average of nearly 98 pounds per person in 2020, according to the National Chicken Council. Per capita US chicken consumption has grown steadily over the last 50 years, rising 160% since 1970, while per capita beef consumption declined by a third. The reasons for this shift are varied and include the lower relative prices for

chicken and a desire on the part of American consumers to reduce dietary fat and cholesterol.

But for those who have gravitated away from beef and toward chicken in response to ubiquitous reports about the unsustainable nature of the beef industry, they may be making that decision based on an incomplete picture. For example, while it’s true that beef has an outsized impact on the climate—pound for pound, it’s responsible for eight to 10 times the heat- trapping gases compared to chicken—industrial-scale poultry production also generates a substantial amount of pollution, and perhaps more than previously thought.

And the distance between the two industries narrows significantly if they’re assessed using a definition of sustainability that isn’t limited to environmental consequences alone.

The notion that social justice is a necessary element of sustainability isn’t new. It goes back at least to 1987, when Our Common Future, the United Nations’ seminal report on sustainable development, linked the ideas of economic growth, environmental protection, and social equity. Since then, advocates on college campuses and beyond have advanced a movement to reframe sustainability to include social justice, while socially responsible businesses adopted the so-called triple bottom line of profits, people, and the planet—an approach for evaluating the performance of companies with a wider rubric than simply how much money it made (though even that concept is being refined).

This broader understanding of sustainability is nowhere more important than in the systems that put food on our plates. As my colleague the political agroecologist Rafter Ferguson has pointed out, a food system that is “environmentally righteous but unjust” really isn’t sustainable

But what does all that mean when you’re just looking to pick up a pack of drumsticks for dinner?

To answer that, you need to understand how consolidated—and by extension, powerful—the major US chicken companies are. Even though market concentration is increasing in many industries and much of the food and agriculture sector, it’s notable that just three companies— Tyson Foods Inc., Pilgrim’s Pride Corp., and Sanderson Farms Inc.—control about half of the nation’s ready-to-cook chicken market, which includes fresh chicken you buy at the supermarket.

With all that market power comes power over the people who actually make chicken possible. That means both the farmers who raise more than nine billion US chickens every year and the workers who slaughter them, break them down into parts, and pack them for sale.

Let’s start with the farms that raise the vast majority of the nation’s broiler chickens. If you have a vision of Old MacDonald in your head, forget about it. Instead, think of enormous climate- controlled and automated warehouses for growing birds. For the most part, the farmers don’t even own the birds they raise. According to the US Department of Agriculture, nearly 88% of US poultry and eggs are grown under contract with one of the big poultry companies, and these companies control nearly every facet of production.

It’s called vertical integration, and it looks like this: a company like Tyson or Perdue ships just- hatched chicks from company-owned hatcheries to contract farmers and sends the farmers regular supplies of feed. Six to eight weeks later, the contract farmers send grown birds to company-owned processing plants. In this system, the farmers, many of whom go heavily into debt financing their chicken houses and making improvements, shoulder nearly all the risk involved in rearing chickens—for example, disease outbreaks, equipment breakdowns, and damage from weather disasters like hurricanes.

In return, they get convoluted payment schemes and ever-changing requirements from the companies. Contracts with the big companies are so lopsided that the Small Business Administration concluded in 2018 that chicken growers may no longer qualify for small business loans because they’re not actually independent businesses at all. Worse, recent investigations of the industry have found that the companies conspired with one another for years to keep farmer pay low.

The Poultry Industry Endangers Its Workers

If the treatment of contract chicken farmers sounds exploitative, the plight of workers at the industry’s processing plants is worse. The facilities that slaughter, dismember, and pack most of the nation’s fresh chicken are vast—some of the largest may employ more than 1,500 workers and process well over a million birds per week, and because most of the workers are people of color and immigrants, they are vulnerable to exploitation and are often treated as if they were expendable in the drive for efficiency.

In its "Platform for Real Food," the HEAL Food Alliance, a multi-sector, multi-racial coalition working to transform the food system, lists “dignity for food workers” among its 10 priorities for creating a more sustainable food industry. But today, working in giant poultry packing plants is

anything but dignified. The plants are full of hazards, with workers at near-constant risk of being cut, pecked, or clawed. The high speeds of the production lines—which move past at 140 birds per minute or faster—and the repetitive tasks workers are required to perform put them at high risk of carpal tunnel syndrome, amputations, and hospitalizations. In recent years, poultry industry leader Tyson Foods has ranked near the top of the nation’s employers for its high rates of severe worker injuries—and those injuries are likely under-reported because vulnerable workers, including recent immigrants, may fear for their livelihoods if they rock the boat. Workers at poultry plants are also exposed to cold temperatures and noxious odors and chemicals, and pressure to keep the lines moving quickly means that, at times, they are reportedly even denied bathroom breaks.

But that’s not all: Pay in the plants is low—pending lawsuits allege that the companies have conspired to keep it that way— and poultry workers (40 percent of whom are female) are also subjected to sexual harassment and discrimination.

What You Can Do to Help

So what’s a conscious consumer to do? First, don’t despair. It is possible to produce meat and poultry in ways that are both ecologically sound—rotating livestock through small pastures and raising multiple animal species and crops in diversified systems that work with nature rather than against it—as well as fair to farmers and workers. In the last couple of years, efforts have ramped up in Congress to boost research and incentives for such climate-friendly systems, to rein in meat and poultry monopolies, and to expand opportunities to make smaller-scale meat and poultry processing more competitive.

Introducing legislation in 2019 that would increase antitrust enforcement in the food system,

Senator Cory Booker jDkNJm pointed to the impact of extreme industry concentration on farmers and rural communities. “This must change,” Booker said. “It's time to restore competition to the marketplace, so that our farmers and ranchers can once again have the opportunity to share in the prosperity they help create."

Meanwhile, poultry workers are seeking better protection through the market. Magaly Licolli, executive director of Venceremos, an Arkansas-based advocacy organization for poultry workers, has spent six years organizing workers in the state, which is home to Tyson Foods. Licolli and the Tyson workers are looking for ways to pressure the company to improve working conditions, and they think they’ve found one in the tomato fields of Florida.

There, the Coalition of Immokalee Workers created the Fair Food Program, a partnership among farmworkers, tomato growers, and large buyers including Walmart, which centers a worker- driven grievance process to ensure fair treatment and safety for workers. Licolli believes such a model could be applied to poultry, noting that chicken buyers already make inspection visits to the poultry plants. “If buyers can check the quality of the product, they can also check how the workers are treated,” Licolli says. She aims to bring such supply chain consequences to the poultry industry to guarantee worker fairness in the future.

But even now, consumers can choose to buy meat and poultry that has been sustainably and equitably raised. Look for poultry, pork, and beef that has been raised by farmers at smaller scale in ecological, regenerative systems and buy the meat directly from those farmers whenever you can. Farmers markets are gearing up for the season, and they’re a great place to start. But there are other options: a silver lining of the COVID catastrophe has been the surge in community supported agriculture and local farm boxes. Better meat is easier than ever to find.

Of course, it will cost more, as all good things do. The farmer I buy from sells whole birds (and that’s how you really should buy chicken) at a price of $5 per pound, which is more than the average supermarket fowl. But if you can afford it, you should pay it. Think about it as buying chicken plus dignity and justice for the people who made it possible. And the increased cost can be partially offset by eating less, which is also good for people and the planet. At least until Big Chicken can be compelled to clean up its act.