Illegal in Massachusetts: Asking Your Salary in a Job Interview

In a groundbreaking effort to close the wage gap between men and women, Massachusetts has become the first state to bar employers from asking about applicants’ salaries before making them job offers. In addition, companies will not be allowed to prohibit their workers from telling others how much they are paid, a move that advocates say can increase salary transparency and help employees uncover disparities. 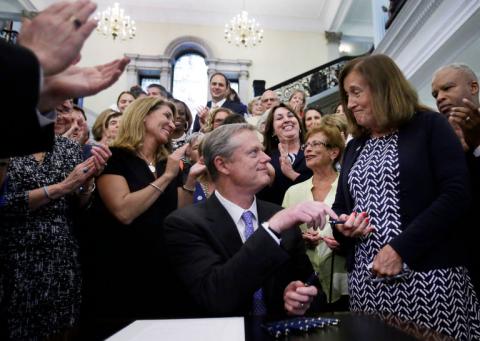 In a groundbreaking effort to close the wage gap between men and women, Massachusetts has become the first state to bar employers from asking about applicants’ salaries before making them job offers.

The new law will require hiring managers to offer a compensation figure upfront — based on what the applicant’s worth is to the company, rather than on what he or she made at a previous position.

The bipartisan legislation, signed into law Monday by Gov. Charlie Baker, a Republican, could inspire similar rules in other liberal-leaning states, as the issue of men historically outearning women who are doing the same job has leapt onto the national political scene. Nationally, there have been repeated efforts to strengthen equal pay laws — which are already on the books but tend to lack teeth — but none have succeeded so far.

“I think very few businesses consciously discriminate, but they need to become aware of it,” said a Massachusetts State Senator Pat Jehlen, Democrat of Somerville, one of the bill’s co-sponsors. “These are things that don’t just affect one job; it keeps women’s wages down over their entire lifetime.”

No longer will job seekers be compelled to disclose their salary or wages at their current or previous jobs — which often leaves applicants with the nagging suspicion that they might have been offered more money if the earlier figure had been higher. Job candidates will still be allowed to volunteer their salary information.

The Massachusetts law, which will take effect in July 2018, takes aim at the subtle factors that often play into compensation decisions. Companies will not be allowed to prohibit their workers from telling others how much they are paid, a move that advocates say can increase salary transparency and help employees uncover disparities.

Federal law already prohibits gender-based pay discrimination, but violations are hard to prove, and wage gaps persist in nearly every industry. Nationally, women are paid 79 cents for every dollar that men earn, according to the Census Bureau.

The Massachusetts bill passed the State Legislature unanimously and won support from a number of local business groups, including the Greater Boston Chamber of Commerce and the Associated Industries of Massachusetts, which initially opposed the new legislation but withdrew its objections after some changes were made.

Equal pay has been a flash point in the presidential race this year, with Hillary Clinton trying to make it a signature issue, and Donald J. Trump accusing the Clinton Foundation of paying men more than women.

In her speech last week accepting the Democratic nomination, Mrs. Clinton urged those who “believe that your working mother, wife, sister or daughter deserves equal pay” to join her.

On the Republican stage a week earlier, Ivanka Trump praised her father, Donald J. Trump, for his actions on the issue.

“Politicians talk about wage equality, but my father has made it a practice at his company throughout his entire career,” Ms. Trump said. “He will fight for equal pay for equal work, and I will fight for this, too, right alongside of him.”