While Khan's speech was meant to tell everyone that Muslim Americans are proud and patriotic citizens, which is fine and true, there are also other ways to work for the good of the nation than fighting in its wars. To be a Muslim citizen of the United States, you don't have to die as a Muslim American. You can live as one, too. 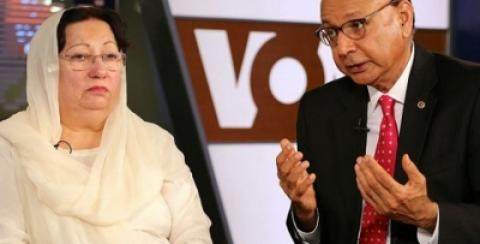 Khizr and Ghazala Khan., Photo: VOA Urdu / Wikimedia Commons // Common Dreams
Guess What? You Can be a Muslim American and Oppose Misguided Wars
But to be a Muslim citizen of the United States, you don't have to die as a Muslim American. You can live as one, too.
By Moustafa Bayoumi
July 29, 2016
The Guardian (UK)
Khizr Khan very nearly stole the show from Hillary Clinton at last night's Democratic national convention. Khizr is the father of Army Captain Humayun Khan, who was killed in Iraq by a car bomb in June 2004 while heroically saving his fellow soldiers from almost certain death.
When Khizr spoke about his son's sacrifice at the convention, the audience was completely rapt with attention. And when he lashed out directly at Donald Trump for his policies, those regarding Muslims especially, the audience burst into long and thunderous applause. With his slow and deliberate delivery and his repeated invocations of Muslim American patriotism, Khan's speech was as masterly as it was memorable. He grabbed our hearts while grabbing Trump by the throat.
But here's the thing. While Khan's speech was meant to tell everyone that Muslim Americans are proud and patriotic citizens, which is fine and true, there are also other ways to work for the good of the nation than fighting in its wars. Muslim Americans have the same rights as other Americans to oppose America's foreign wars and misguided policies, and we should be able to do so without having our loyalty brought into question.
The fact that our allegiance is questioned by the Republican party is well known. The GOP under Donald Trump has adopted extreme policy positions, from proposing a ban on Muslims entering the country to electronically tagging Muslims on the federal government's terrorism watch list so law enforcement can track their movements. (The latter suggestion was endorsed this week by Trump's adviser former New York City mayor Rudolph Giuliani.)
So to show the wide chasm of difference between them and the Republicans, the Democrats included Muslims in several specific ways during their convention. President Obama spoke about being American while wearing "a baseball cap or a hijab". Bill Clinton tried (but failed miserably) to include Muslims in his speech and his version of America. We heard from Khizr Khan. And we saw plenty of Muslim women and men throughout the televised coverage of the convention.
But Muslim Americans must be recognized as full and participating citizens by the Democratic party, not merely as symbols of patriotism or photo-ops of inclusion. Earlier in the convention, the Clinton campaign tweeted a photo of Nida Allam, a Muslim woman who wears hijab, as she was wiping away tears. "We made history," the tweet read, suggesting that Allam was overcome with emotion that Hillary Clinton had become the first woman to secure the nomination for president from a major political party. In fact, Allam, a North Carolina delegate and regional field director for the Sanders campaign, was wiping away her tears because Bernie Sanders had conceded the race. "Guess you didn't get the memo," she tweeted back to the Clinton people, along with the hashtags #StillSanders #ImanImmigrant and #SupportPalestinianRights.
In fact, there are many Muslim Americans, include the Brooklyn-based activist Linda Sarsour and Minnesota congressman Keith Ellison, who like Allam are working tirelessly to shape the progressive wing of the Democratic party. Many Muslim American Democrats have pushed back on Clinton's views on the Israel-Palestine conflict and have criticized the Obama administration's Countering Violent Extremism initiative, for example. Just because the Republican position on Muslims is loathsome does not give the Democrats a pass to use Muslims as props. We should not just be seen but also heard, and in all of our complexity.
None of this is to take away from the profound loss the parents of Humayan Khan have experienced or the sacrifice of their son. But to be a Muslim citizen of the United States, you don't have to die as a Muslim American. You can live as one, too.
[Moustafa Bayoumi is an award-winning writer, and associate professor of English at Brooklyn College, City University of New York.]
The Sacrifice Muslim Soldier Khan Shouldn't Have Had To Make
Clinton's rhetoric on the Muslim world might be friendlier than Trump's, but her record is much bloodier.
By Peter Certo
August 3, 2016
Other Words
It was impossible not to be moved as Khizr and Ghazala Khan, two Muslim immigrants from Pakistan, stood before the Democratic National Convention and mourned their son Humayan, a U.S. soldier who'd been killed in Iraq.
Humayan, his grieving father recalled, was "the best of America." Yet if it were up to Donald Trump, Khan said, the slain soldier "never would have been in America." It was a compelling rebuke to the GOP nominee's unrepentant calls to banish Muslims and immigrants alike.
Trump, in his fashion, responded poorly. The billionaire insisted that, like the Khans, he's "made a lot of sacrifices." He sneered that perhaps the bereaved Ghazala had remained silent on stage because "she wasn't allowed" to talk.
It was sad and ugly. But amid the word salad was a kernel of truth: "Hillary voted for the Iraq war," Trump cried, "not me!" 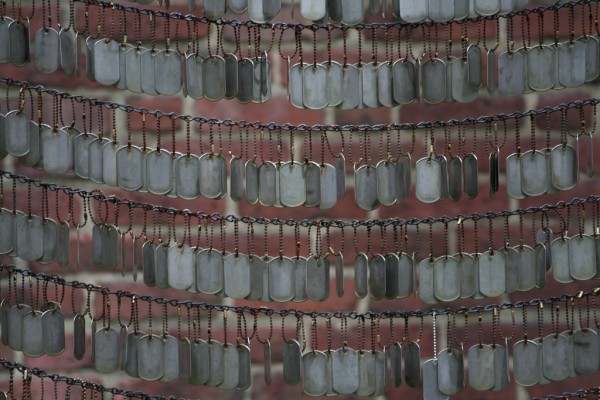 Photo: Ewan McIntosh / Flickr // Other Words
There at least, he wasn't wrong.
As a senator from New York, Clinton not only voted for the war. She was among its most vocal supporters in either party, eagerly rehashing the Bush administration's claims that Saddam Hussein was developing weapons of mass destruction.
"I stand by the vote," Clinton told the Council on Foreign Relations in late 2003, when those weapons had failed to materialize. Six months later, Humayan Khan was killed by a car bomb in Iraq. He was one of 4,424 U.S. soldiers to die in that war - along with perhaps up to a million Iraqi civilians.
The war in which Khan gave his life has been a political football for so long that it's become hard to appreciate just what an enormous catastrophe it was - and remains. The invasion exploded sectarian tensions across the Middle East and led directly to the rise of ISIS.
As the worst refugee crisis since World War II unfolds across the Middle East and Europe - and as ISIS terrorists murder innocents from Baghdad to Belgium to San Bernardino - the gaping wound we opened in Iraq sits beneath it all like a black hole, eviscerating human lives at ferocious speed even 13 years later.
Yet as late as her first presidential bid, Clinton refused to apologize for supporting the invasion. If you're looking for "someone who did not cast that vote or has said his vote was a mistake," she told Democratic voters in 2007, "there are others to choose from."
As her polling numbers soured, Clinton eventually did cop to making a "mistake" on Iraq. But that didn't stop her, once she joined Obama's administration, from supporting escalation in Afghanistan, deeper involvement in Syria, and intervention in Libya's civil war, which also ended disastrously.
As a presidential candidate this year, Clinton remains committed to launching a "no-fly zone" in Syria. What could go wrong?
Well, in Iraq, a no-fly zone gave way to a full-scale invasion. In Libya, it gave way to regime change and a civil war. Both countries became basket cases and ISIS strongholds, leading the Obama administration to launch new wars in each afterward - most recently with a huge U.S. bombing raid on Sirte, Libya.
Is there any reason to expect Syria to turn out better?
Clinton's rhetoric on the Muslim world might be friendlier than Trump's, but her record is much bloodier. Even while she condemns Trump's erratic statements on foreign policy, there's no evidence she sees any need to redraw her own hawkish playbook.
The Humayan Khans of America, who freely offer their lives to protect their country, deserve a better approach - one based on diplomacy and human rights. And so do the millions of people of the Middle East, Muslim and otherwise.
[OtherWords.org editor Peter Certo writes about foreign policy for the Institute for Policy Studies.]
Let's Be Fair to Trump Who is Getting Beaten Up for Evading the Vietnam War.Like Thousands of Other Young Americans at the Time
By Clancy Sigal
August 3, 2016
Portside 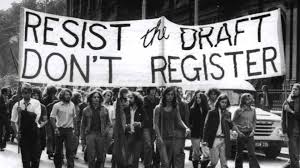 Tomorrow is an anniversary of Lyndon Johnson's fake "Tonkin Bay" incident that licensed him to escalate the Vietnam war.
Johnson lied.  There was NO attack on our Navy from the Communists on 4 Aug '64 that the US govt used as an excuse to fight a war that killed millions of Asians and 58,000 Americans.
A Navy pilot flying overhead that night was commander James Stockdale, later held as a POW by the North Vietnamese.
"I had the best seat in the house to watch that event," recalled Stockdale, "and our destroyers were just shooting at phantom targets - there were no PT boats there.... There was nothing there but black water and American firepower."
Trump has screwed the pooch by denouncing  Khizr and Ghazala Khan, the parents of Captain Humayun Khan, a soldier who died in Iraq.  Bad cess on him.
But there's an unholy smell coming out of the Khan incident and the Democratic convention.  All this militaristic, patriotic talk of "sacrifice" - as if there's a competition who can die the most in a war - puts a gloss on what should be a big debate on whether war is a good thing.
It really doesn't help when liberal Democrats scream "USA! USA!" at Sanderistas who at least want to raise the question and get squelched by Hillary's praetorian guard.
Let's be extremely careful not to use Trump's current insanity as an excuse to make future wars acceptable to us.  And remember that Hillary's instincts are "liberal intervention" wherever evil raises its ugly head.
We got lied into Vietnam and into Iraq.  In the drive to undermine Trump let's not put lipstick on the pig of more unnecessary wars.
[Clancy Sigal is a PEN Lifetime Achievement award winner, National Book Award runner up, BBC broadcaster and journalist, he is a professor emeritus of the Annenberg School of Journalism at the University of Southern California.  He has lectured at Oxford, Cambridge, the London School of Economics, and at Eton College.  His unofficial story may be found here.]