TPP "will cost American jobs, harm the environment, increase the cost of prescription drugs, and threaten our ability to protect public health". 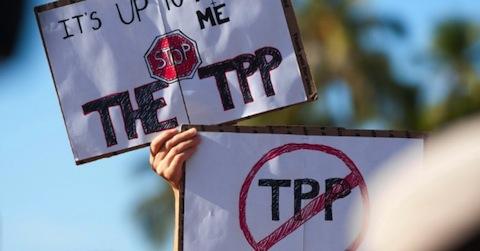 Sen. Bernie Sanders (I-Vt.) is calling on Democratic Congressional leadership to publicly oppose a "lame-duck" vote on the TPP., SumOfUs/flickr/cc

Hillary Clinton may not have heeded progressives' call to clearly say she'll urge the White House and her fellow party members to oppose a "lame-duck" vote on the Trans Pacific Partnership, but Sen. Bernie Sanders (I-Vt.) has done just that, calling on Democratic Congressional leadership to publicly oppose a post-Election Day vote on the "job-killing trade deal."

Sanders' statement, issued Friday, comes as the Obama administration continues its push to get the TPP passed this year.

On Friday, as Politico reports, the White House sent lawmakers a draft, as required by "fast track" or trade promotion authority, that "describes the major steps the administration will take to implement any changes to U.S. law required by the deal." That notification comes a week after Obama said he expected Congress to pass the deal in the lame duck session.

Sanders said in his statement that he was "disappointed by the president's decision to continue pushing forward on the disastrous Trans Pacific Partnership trade agreement that will cost American jobs, harm the environment, increase the cost of prescription drugs, and threaten our ability to protect public health."

"In my view, it is now time for the leadership of the Democratic Party​ in the Senate and the House to join Secretary Clinton and​ go on the record in opposition to holding a vote on this job-killing trade deal during the lame-duck session of Congress and beyond," he added.

Adam Green, co-founder of the Progressive Change Campaign Committee, a group that has campaigned against the deal, said the president's "continued insistence on holding a lame-duck vote on the TPP is hurting Democratic chances of success this November—and helping Donald Trump's chances with blue collar voters."

Regarding the Democratic presidential nominee's stance, however, not all progressives are convinced that's she's come out forcefully enough against the TPP, specifically on the charge to take a leadership position to help stop the deal.

In an economic policy speech on Thursday, Clinton said, "I will stop any trade deal that kills jobs or holds down wages—including the Trans Pacific Partnership. I oppose it now, I'll oppose it after the election, and I'll oppose it as President."

With those words, said Green, Clinton "signaled she will personally work to kill the corporate-written TPP if it comes up after the election in an unaccountable lame-duck Congress."

Democracy for America (DFA) praised what the group called the "strongest [opposition to the deal] we've heard from her to date," referring to her speech on Thursday, but added that "it's now more important than ever that the country and President Obama hear specifically from Secretary Clinton that a vote on the job-killing TPP during a lame duck session of Congress must not happen."