Latino Votes Count or ‘Why Would They Be Trying to Suppress Them?’: Dolores Huerta on What’s at Stake in 2016

August 17, 2016 Ally Boguhn Rewire
Printer friendly
Latino Votes Count or ‘Why Would They Be Trying to Suppress Them?’: Dolores Huerta on What’s at Stake in 2016 Published August 17, 2016 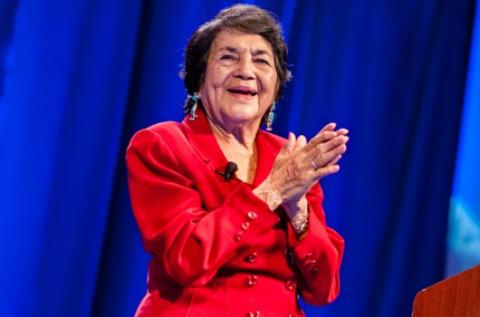 Republican nominee Donald Trump launched his campaign for president in June 2015 with a speech notoriouslyclaiming Mexican immigrants to the United States “are bringing drugs, and bringing crime, and their rapists.”

Since then, both Trump’s campaign and the Republican Party at large have continued to rely upon anti-immigrant and anti-Latino rhetoric to drum up support. Take for example, this year’s Republican National Convention in Cleveland, where Sheriff Joe Arpaio—whose departmentcame under fire earlier this year for racially profiling Latinos—was invited to take the stage to push Trump’s proposed 2,000-mile border wall. Arpaio told the Arizona Republic that Trump’s campaign had worked with the sheriff to finalize his speech.

This June, just a day shy of the anniversary of Trump’s entrance into the presidential race, People for the American Way and CASA in Action hosted an event highlighting what they deemed to be the presumptive Republican nominee’s “Year of Hate.”

Among the advocates speaking at the event was legendary civil rights leader Dolores Huerta, who worked alongside César Chávez in the farm workers’ movement. Speaking by phone the next day with Rewire, Huerta—who has endorsed Democratic nominee Hillary Clinton—detailed the importance of Latinos getting involved in the 2016 election, and what she sees as being at stake for the community.

The Trump campaign is “promoting a culture of violence,” Huerta told Rewire, adding that it “is not just limited to the rallies,” which have sometimes ended in violent incidents, “but when he is attacking Mexicans, and gays, and women, and making fun of disabled people.”

Huerta didn’t just see this kind of rhetoric as harmful to Latinos. When asked about its effect on the country at large, she suggested it affected not only those who already held racist beliefs, but also people living in the communities of color those people may then target. “For those people who are already racist, it sort of reinforces their racism,” she said. “I think people have their own frustrations in their lives and they take it out on immigrants, they take it out on women. And I think that it really endangers so many people of color.”

The inflammatory rhetoric toward people of color by presidential candidates has led to “an alarming level of fear and anxiety among children of color and inflaming racial and ethnic tensions in the classroom,” according to an April report by the Southern Poverty Law Center (SPLC). The organization’s analysis of the impact of the 2016 presidential election on classrooms across the country found “an increase in bullying, harassment and intimidation of students whose races, religions or nationalities have been the verbal targets of candidates on the campaign trail.” Though the SPLC did not name Trump in its questions, its survey of about 2,000 K-12 educators elicited up more than 1,000 comments about the Republican nominee, compared to less than 200 comments mentioning other presidential candidates still in the race at that time.

But the 2016 election presents an opportunity for those affected by that violent rhetoric to make their voices heard, said Huerta. “The Latino vote is going to be the decisive vote in terms of who is going to be elected the president of the United States,” she continued, later noting that “we’ve actually seen a resurgence right now of Latinos registering to vote and Latinos becoming citizens.”

However, a desire to vote may not always be enough. Latinos, along with other marginalized groups, face many barriers when it comes to voting due to the onslaught of voter restrictions pushed by conservative lawmakers across the country—a problem only exacerbated by the Supreme Court’s 2013 ruling gutting portions of the Voting Rights Act (VRA) meant to safeguard against voter suppression efforts. The 2016 election season will be the first presidential election without those protections.

As many as 875,000 eligible Latino voters could face difficulty voting thanks to new restrictions—such as voter ID laws, proof of citizenship requirements, and shortened early voting periods—put into place since the 2012 elections, a May analysis from the National Association of Elected and Appointed Officials found.

When it comes to restrictions like this, Huerta “absolutely” saw how they could create barriers for those hoping to cast their ballot this year. “They’ve made all of these restrictions that keep especially the Latino population from voting. So it’s very scary,” said Huerta, pointing to laws in states like Texas, which previously had one of the strictest voter ID laws in the country. (The state has since agreed to weaken its law following a judge’s order).

“We know that we’ve had this problem that Latinos sometimes don’t vote—they feel intimidated, they feel like maybe their vote doesn’t matter,” Huerta went on.

Appealing to those voters means tapping into the issues Latinos care about. “I think the issues [Latinos care about] are very, very clear,” said Huerta when asked how a presidential candidate could best appeal to the demographic. “I mean, immigration of course is one of the issues that we have, but then education is another one, and health care.”

A February survey conducted jointly by the Washington Post and Univision found that the top five issues Latino voters cared about in the 2016 election cycle were jobs and the economy (33 percent), immigration (17 percent), education (16 percent), health care (11 percent), and terrorism (9 percent).

Another election-year issue that could affect voters is the nomination of a U.S. Supreme Court justice, Huerta added. She pointed out the effect justices have on our society by using the now-decided Whole Woman’s Health v. Hellerstedt case as an example. “You know, again, when we think of the presidents, and we think of the Supreme Court and we know that [was] one of the issues that [was] pending in the Supreme Court … whether what they did in Texas … was constitutional or not with all of the restrictions they put on the health clinics,” she said.

Latinas disproportionately face large barriers to reproductive health care. According to Planned Parenthood, they “experience higher rates of reproductive cancers, unintended pregnancy, and sexually transmitted infections than most other groups of people.” Those barriers are only exacerbated by laws like Texas’ HB 2, as the National Latina Institute for Reproductive Health explained in its amicus brief in theWhole Woman’s Health case prior to the decision: “Texas Latinas already face significant geographic, transportation, infrastructure, and cost challenges in accessing health services.”

“H.B. 2’s impact is acute because of the day-to-day struggles many Latinas encounter when seeking to exercise their reproductive rights,” wrote the organization in its brief. “In Texas, there is a dire shortage of healthcare facilities and providers in predominantly Latino communities. Texas has the highest percentage of uninsured adults in the country, and Texas Latinos are more than twice as likely as whites to be uninsured …. Additionally, the lack of public and private transportation creates a major barrier to accessing health services, especially in rural areas.”

As Rewire’s Tina Vasquez has reported, for undocumented women, the struggle to access care can be even greater.

Given the threats cases like Whole Woman’s Health have posed to reproductive rights, Huerta noted that “Trump’s constant attacks and misogynist statements” should be taken with caution. Trump has repeatedly vowed to appoint anti-choice justices to the Supreme Court if elected.

“The things he says without even thinking about it … it shows what a dangerous individual he can be when it comes to women’s rights and women’s reproductive rights,” said Huerta.

Though the race for the White House was a top concern of Huerta’s, she concluded by noting that it is hardly the only election that matters this year. “I think the other thing is we have to really talk about is, the presidency is really important, but so is the Senate and the Congress,” said Huerta.

Ally Boguhn is the Political and Campaigns Editor at Rewire. Prior to joining the team, she worked as an associate research director at Media Matters for America, where she specialized in analyzing media representations of reproductive rights and health.