Trump, in a Major Immigration Speech, Is Back in Fearmongering Form

In Mexico, Trump is solemn and praising; in Arizona, he's back to hysterical horror shows. His return to his old self was swift. Trump's Wednesday night speech was fiery, leaning on his usual depictions of immigrants as murderous, villainous, sexually deviant leeches. And then, he not only pledged every harsh anti-immigration tactic he'd floated for the past year, he expanded on them all - aimed at revving up his conservative base. 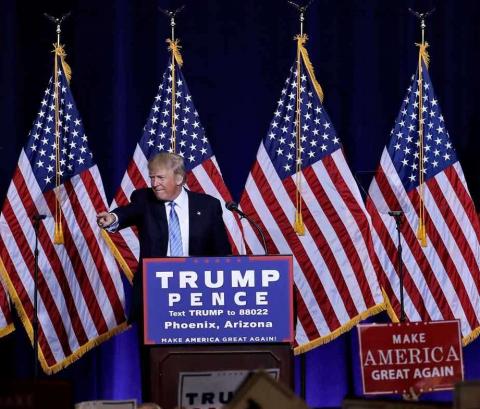 Republican presidential candidate Donald Trump points to the audience after delivering an anti-immigration policy speech during a campaign rally at the Phoenix Convention Center, Wednesday, August 31, 2016.,AP Photo / Matt York // The Nation
Trump, in a Major Immigration Speech, Is Back in Fearmongering Form
By Julianne Hing
September 1, 2016
The Nation
One never knows﻿ what Donald Trump will say—the candidate has flaunted his unpredictability for over a year. But now, finally, in the general election and with his stance on his core political identity in question, he has delivered the most anticipated speech of his political career. And here’s the answer. There will be no flip-flopping. There will be no “softening.” There will be no pivot.

If anyone had any doubts, Trump put them to rest on Wednesday evening.

The wall? You got it. “On day one we will begin working on an impenetrable, physical, tall, powerful, beautiful southern border wall,” Trump said as soon as he got past the opening niceties. And, in a response to Mexican President Enrique Peña Nieto’s post-visit tweet, handed back a sassy retort. “They don’t know it yet. They’re great people and great leaders. But they’re gonna pay for it.”

The deportation force? He’s standing by it. The defunding of sanctuary cities? That too.

And there’s more. Trump reiterated that undocumented immigrants who’ve been convicted of crimes will be swiftly deported. “Day one, my first hour in office, those people are gone,” Trump said.

He also pledged to revive programs that require partnership between local law enforcement agencies and immigration authorities—programs that the Obama administration has retired or lessened. One that Trump is fond of, called 287g, deputizes local law-enforcement personnel to act as immigration agents. The priority will be to expedite all removals of all undocumented immigrants. To that end, Trump also promised that any undocumented immigrant who’s ever arrested will be sent into deportation proceedings. In Trump’s imagining they never need be charged, or even convicted of any crime for them to be separately detained by immigration officials.

He also said that he will go after the most politically sympathetic group of undocumented immigrants: so-called DREAMers who came to the United State as children, and who have to clear a host of hurdles to qualify for the executive action program President Obama announced in 2012. Deferred Action for Childhood Arrivals, has granted undocumented immigrants who came into the country as children short-term reprieves from the threat of deportation. (A second executive action remains tangled up in court.) Trump, reiterating earlier pledges, said he would throw both executive action programs out the window.

Any undocumented immigrant in this country, regardless of how long they’ve been here, regardless of whether they have US citizen children or families, will be forced to leave the country if they ever want to change their status. “They will have one route and one route only—to return home and apply for re-entry like everybody else under the rules of the new legal immigration system that I have outlined above.”

The bottom line? Donald Trump put every single undocumented immigrant on notice. And the dividends would be immediate, Trump promised.

“Gangs will disappear, and the gangs are all over the place,” he said. “We will have a peace dividend,” which, Trump said, would allow the United States to rebuild “American inner cities.” Trump returned to a now-familiar refrain, arguing that African Americans and Latinos are hurt by the presence of undocumented immigrants. With undocumented immigrants banished from the country, peace and prosperity would reign.

This was no general election appeal to reach past the converted. Even though he promised a departure from the “usual” campaign speech at the top of his remarks, Wednesday night was primary-season Donald Trump in his most comfortable mode. He weaved demagoguery and nationalism together into a hysterical horror show, ratcheting up the volume as he moved through the speech until he was shouting every single line. At the top of his speech, he ticked off the names and detailed the deaths of people who’d been reportedly killed by undocumented immigrants, and at the end of it stood next to his podium as mothers and sisters and cousins of those people spoke their loved one’s names and pledged their allegiance to Trump.

Perhaps most amazing is that this is a speech that was scheduled, canceled, scheduled, then canceled again. It finally took place Wednesday hours after the Trump campaign pulled off what at first looked like an incredible feat with his quick trip to Mexico.

Trump, a man who’s never held public office, whose career has been plagued by scandals, bankruptcies, and lawsuits, who’s publicly and repeatedly insulted women, Muslims, Mexicans, while running for the highest public office in the United States, stood side by side with a head of state, Mexican President Enrique Peña Nieto, on a formal stage. In his remarks from the stage in Mexico, Trump went to great lengths to praise Americans of Mexican descent, calling them “beyond reproach,” and “spectacular, hard-working people.” Trump didn’t depart from his script, and spoke in nearly somnolent tones. Such decorum and composure from Trump is novel—and the optics were striking.

Back in the United States, by the time he hit his stride during his remarks, he had shed the statesman’s straitjacket. His return to his old self was swift. His remarks in Phoenix had echoes of his speech at the RNC earlier this summer. Both speeches were long, for one—each clocked in at over an hour. And Trump’s Wednesday night speech was fiery, leaning on his usual depictions of immigrants as murderous, villainous, sexually deviant leeches. And then, he not only pledged every harsh anti-immigration tactic he’d floated for the past year, he expanded on them all.

For all the anticipation, there was nothing new to see in the end.

[Julianne Hing is covering the 2016 elections from the perspective of immigrant communities for The Nation. She previously covered immigration, education and police accountability for Colorlines.]
Copyright c 2016 The Nation. Reprinted with permission. May not be reprinted without permission. Distributed by Agence Global.

'Angry, Snarling, Terrifying': Trump Confirms Nightmarish Immigration Vision
Trump's speech in Arizona "couldn't have been clearer: If you live without papers in America, you should live in fear". Donald Trump's speech in Phoenix on Wednesday night appeared to be aimed at revving up his conservative base.
By Deirdre Fulton, staff writer
September 1, 2016
Common Dreams 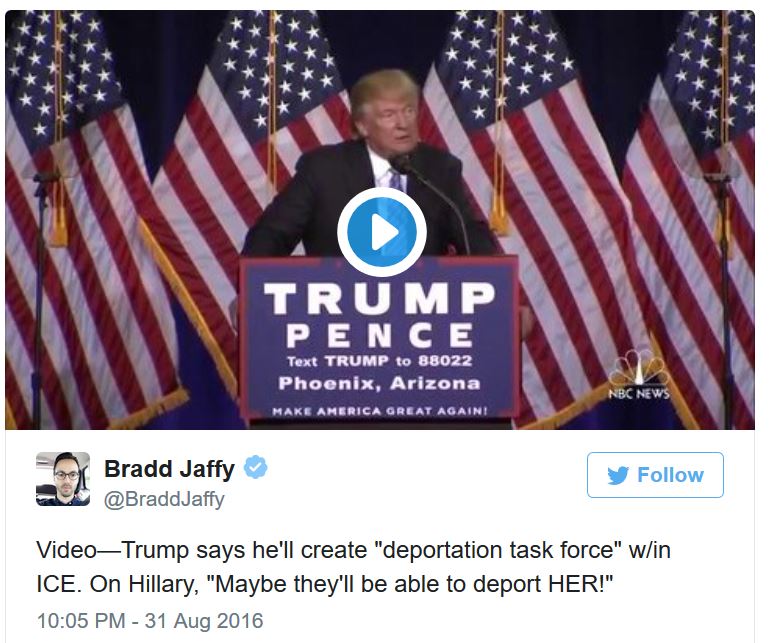 In a chilling speech on Wednesday night, Republican presidential nominee Donald Trump doubled down on his anti-immigrant rhetoric, adopting a cutthroat tone as he reiterated his vow to deport millions of undocumented people and build a wall on the border with Mexico—which that country would pay for, of course.

The vague, misleading, and divisive speech, lauded by the likes of right-wing pundit Ann Coulter and former Ku Klux Klan leader David Duke, "was long on inflammatory rhetoric, and short on viable policy solutions," Raul A. Reyes wrote in his analysis for NBC News.

The tone of this speech was harsh, at times flat-out ugly. Trump thinks that Syrian refugees arriving in the U.S have it too easy, and that undocumented immigrants are treated better than veterans. He believes that we should institute an "ideological loyalty test" for prospective immigrants; never mind that this would likely be unconstitutional. He described some immigrants as a potential "Trojan Horse," and reeled off crimes allegedly committed by undocumented people.

Indeed, Dara Lind argued at Vox, the speech in Arizona "couldn't have been clearer: If you live without papers in America, you should live in fear."

As Southern Methodist University student and "DREAMer" Jose Manuel Santoyo told his local NBC affiliate, "I have protection from deportation but there are a lot of people who don't. And that's what really worries me."

What's more, that protection isn't guaranteed under a Trump presidency, he said. "It can be taken away at any moment," Santoyo told the station. "It's an executive order. It's just like many executive orders, they come and go."

ThinkProgress zeroed in on Trump's promise to establish "a new special deportation task force focused on identifying and quickly removing the most dangerous criminal illegal immigrants in America who have evaded justice."

"Though 'criminal illegal immigrants' would be the initial focus of Trump's deportation force," wrote ThinkProgress political editor Aaron Rupar, "he made clear that he wants all undocumented people out."

The speech quashed any expectations that, given Trump's meeting with Mexican President Enrique Peña Nieto on Wednesday, "the reality television star might be pivoting from xenophobic showman to quasi-serious candidate," as Chicago Tribune columnist Rex Huppke put it.

"Before a raucous crowd in Arizona," Huppke wrote, "Trump returned to his natural center: angry, snarling, aggrieved and terrifying."

After spending time in Mexico praising the country's "high quality people," Trump, just hours later, launched into a rant about undocumented Mexican immigrants who have killed and raped, spinning a dystopian tale that painted all immigrants as people to be feared, people to be rounded up and hauled out of this country.

[...] He again approvingly referenced President Dwight D. Eisenhower’s deportation program "Operation Wetback," a cruel and deadly disaster from the 1950s, suggesting that Trump's version of that program would be even tougher.

In fact, the address appeared to confirm that Trump will "continue to feed his base his customary brew of nativist and xenophobic nationalism, and count on angry non-college whites to push him over the top in a decisive handful of Rust Belt states," wrote Greg Sargent at the Washington Post.

But while Trump's words may have provided reassurance for his ultra-conservative base, the speech alienated some key supporters. Indeed, Politico reported Thursday that Trump's latest diatribe embraced such extreme rhetoric and proposals that "several major Latino surrogates" for Trump "are reconsidering their support for him."

[Deirdre Fulton is a senior editor and staff writer for Common Dreams. Previously she worked as an editor and writer for the Portland Phoenix and the Boston Phoenix, where she was honored by the New England Press Association and the Association of Alternative Newsweeklies. A Boston University graduate, Deirdre is a co-founder of the Maine-based Lorem Ipsum Theater Collective and the PortFringe theater festival. She writes young adult fiction in her spare time. Email her at deirdre@commondreams.org or find her on Twitter: @deirdrefulton ]
This work is licensed under a Creative Commons Attribution-Share Alike 3.0 License
Subscribe to Portside