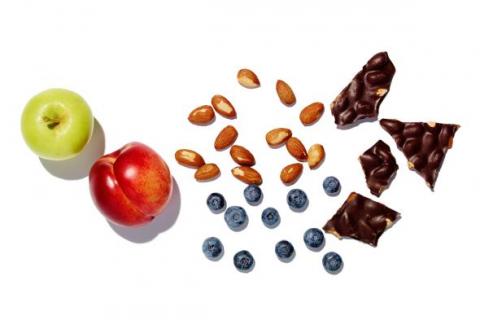 Desserts can be more healthful but still a treat., Rebecca Hale, National Geographic

Renowned nutrition scientist Walter Willett is fed up with dessert. Not all desserts, just the bad ones. “At the vast majority of restaurants, there is nothing but various combinations of refined flour, sugar, and unhealthy fats” on the menu, he says.

Willett, who heads up the nutrition department at Harvard’s T.H. Chan School of Public Health, is on a mission to make dessert better for health without sacrificing flavor, and he’s using science to back it up.

“From a large amount of research, we know that nuts, fruit, and dark chocolate are some of the healthiest foods we could eat,” he says. So for several years now, he’s been challenging chefs to redesign dessert to focus on these foods, which he calls the Three Pleasures.

Why these three? Fruit offers vitamins and minerals that help protect against heart disease and diabetes, he says. Nuts are full of healthy, satisfying, unsaturated fats that research has shown to predict lower rates of diabetes and heart disease. The flavonoids in dark chocolate modestly reduce blood pressure and insulin resistance. But adding “a lot of sugar and butter fat to make milk chocolate counterbalances the benefits,” Willett cautions, so it’s best to stick with the dark stuff.

I got to witness Willett’s request firsthand one evening when I dined with him and two other nutrition scientists.

We were in Poughkeepsie, New York, at an upscale and fairly hip restaurant called The Artist’s Palate, just down the road from the Culinary Institute of America, where Willett was speaking at a conference called Menus of Change last month. Dinner was fine, but when it came time for dessert, Willett proceeded to engage in his own menu change.

After scanning the dessert menu, he asked the waiter to get the chef. The head chef, Megan Kulpa Fells, a bubbly, tall woman who graduated from the CIA (the foodies not the spies), came bounding out of the kitchen. Willett asked her if she would go off-menu and supply him with “Three Pleasures” for dessert. Fells laughed and asked him what those “pleasures” might be. (At first, I wasn’t sure where this was all going.) Willett then politely asked the chef if she would whip something up with fruit, chocolate and nuts for our dessert.

Shortly, she presented us with a simple display of a juicy cherry cut open and sitting beside a small round piece of dark chocolate candy made from scratch. Next to the chocolate was a dusting of chopped hazelnuts that made a dramatic yellow line across the white plate. In the bottom corner of the plate, a small sprinkling of lavender smiled up at us.

Willett tells us he’s been springing the Three Pleasures challenge on chefs when he can’t find healthy choices, and for the most part, chefs are game. “Most chefs enjoy a little challenge to present something simple in a creative way, and we [he and his wife] have certainly enjoyed the many different presentations of this triad.”

Why the name “Three Pleasures”? Willett says, “Simplicity and pleasure captures the experience in a way that is light, not decadent. Perhaps this was inspired by ‘Three Delights’ that one can often see on the menu in a Chinese restaurant.”

To encourage others to play along, Willett began posting photos of the various renditions that chefs across the country served up over the years on his Harvard site, The Nutrition Source. There, you’ll find various inspirational combinations he has been served, including fresh strawberries, blueberries, macadamia nuts and chocolate quenelles on one plate; a pile of mangos, blackberries and grapefruit slices with chocolate sauce and mixed nuts on the side in another.

The goal is to get the public involved. “If enough people ask for the ‘Three Pleasures,’ we will see this as a regular fixture on dessert menus,” he says. And who knows? By skipping the pound cake and ice cream, we might even get a little healthier in the process.

Want to play along? The next time you dine out and are offered dessert, ask for a simple combination of fruit (dried or fresh), dark chocolate, and nuts. Or make your own! (But please, hold off on the white flour, unhealthy fats, and added sugar—that defeats the purpose.)

Join our challenge by uploading your photos on Instagram with the hashtag #3ForDessert or tag them on Twitter to our account, @NatGeoFood. Check out the Instagram examples already coming in of #3ForDessert ideas from Chef Todd Gray of Equinox Restaurant in Washington, D.C., Pati's Mexican Table author Pati Jinich, and the hazelnut milk panna cotta from Caitlin Dysart, pastry chef at 2941 in Falls Church, Va.

In a couple of weeks, we'll pick the best photos to publish on our site, and ask Willet to weigh in on why they work nutritionally. Happy hunting and gathering!

Mary Beth Durkin is an award winning multi-media journalist focusing on food and its intersection with our health, public policy and the environment. She was the creator and producer of a food series broadcast nationally on the PBS NewsHour. Mary Beth won a James Beard award for "best television segment" for the PBS series this year. Her 25-year journalism career includes documentaries, TV news, print and digital pieces.