Two degrees above absolute zero was never so hot. 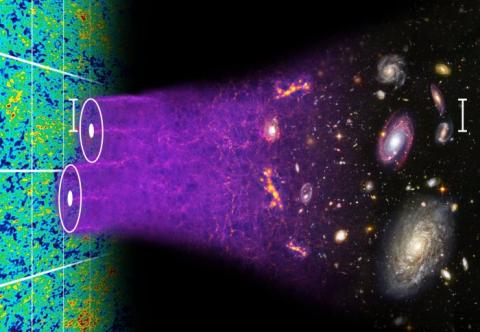 An illustration of the concept of Baryonic Acoustic Oscillations, which detail how large scale structure forms from the time of the CMB onward. This is also impacted by relic neutrinos., Chris Blake & Sam Moorfield.

The Big Bang, when it was first proposed, seemed like an outlandish story out of a child’s imagination. Sure, the expansion of the Universe, observed by Edwin Hubble, meant that the more distant a galaxy was, the faster it receded from us. As we headed into the future, the great distances between objects would continue to increase. It’s no great extrapolation, then, to imagine that going back in time would lead to a Universe that was not only denser, but thanks to the physics of radiation in an expanding Universe, hotter, too. The discovery of the cosmic microwave background and the cosmic light-element background, both predicted by the Big Bang, led to its confirmation. But last year, a leftover glow unlike any other — of neutrinos — was finally seen. The final, elusive prediction of the Big Bang has finally been confirmed. Here’s how it all unfolded.

Seventy years ago, we had taken fascinating steps forward in our conception of the Universe. Rather than living in a Universe governed by absolute space and absolute time, we lived in one where space and time were relative, depending on the observer. We no longer lived in a Newtonian Universe, but rather one governed by general relativity, where matter and energy cause the fabric of spacetime itself to curve. And thanks to the observations of Hubble and others, we learned that our Universe was not static, but rather was expanding over time, with galaxies getting farther and farther apart as time went on. In 1945, George Gamow made perhaps the greatest leap of all: the great leap backwards. If the Universe were expanding today, with all the unbound objects receding from one another, then perhaps that meant that all those objects were closer together in the past. Perhaps the Universe we live in today evolved from a denser state long ago. Perhaps gravitation has clumped and clustered the Universe together over time, while it was more even and uniform in the distant past. And perhaps  — since the energy of radiation is tied to its wavelength – that radiation was more energetic in the past, and hence the Universe was hotter long ago. 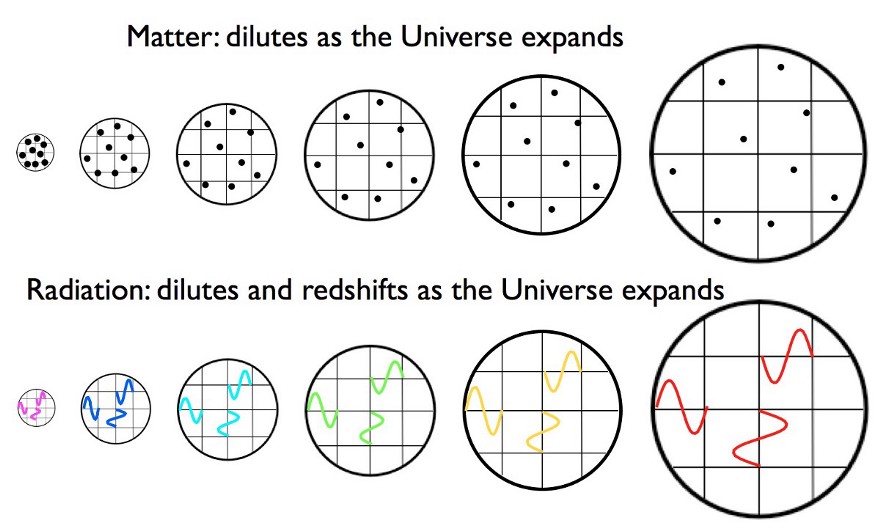 How matter and radiation dilute in an expanding Universe; note the radiation’s redshift to lower and lower energies over time. Image credit: E. Siegel.

And if this were the case, it brought up an incredibly interesting set of events as we looked farther and farther back into the past:

This picture is part of what’s known as the hot Big Bang, and it makes a whole slew of predictions.

Each one of these predictions, like a uniformly expanding Universe whose expansion rate was faster in the past, a solid prediction for the relative abundances of the light elements hydrogen, helium-4, deuterium, helium-3 and lithium, and most famously, the structure and properties of galaxy clusters and filaments on the largest scales, and the existence of the leftover glow from the Big Bang — the cosmic microwave background — has been borne out over time. It was the discovery of this leftover glow in the mid-1960s, in fact, that led to the overwhelming acceptance of the Big Bang, and caused all other alternatives to be discarded as non-viable. 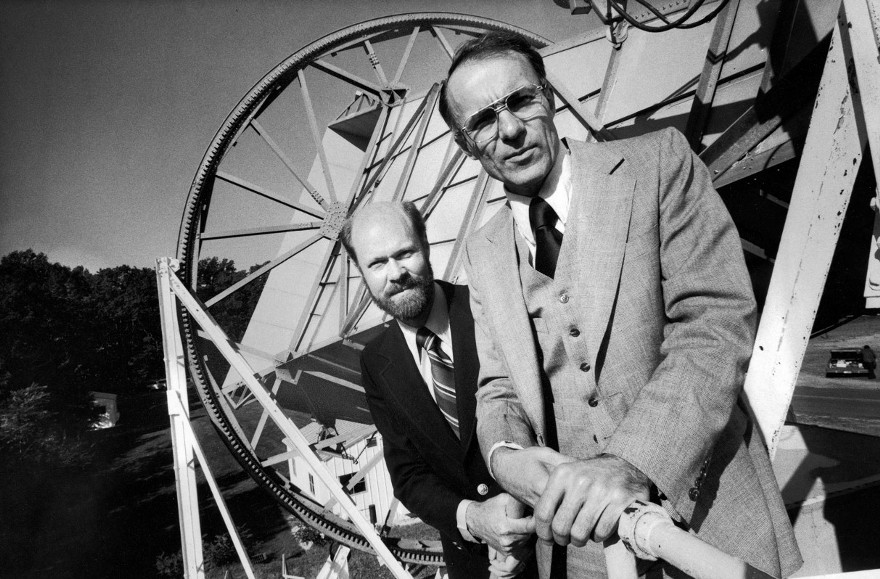 Image credit: LIFE magazine, of Arno Penzias and Bob Wilson with the Holmdel Horn Antenna, which detected the CMB for the first time.

But there was another prediction we haven’t talked about much, because it was thought to be untestable. You see, photons — or quanta of light — aren’t the only form of radiation in this Universe. Back when all the particles are flying around at tremendous energies, colliding into one another, creating and annihilating willy-nilly, another type of particle (and antiparticle) also gets created in great abundance: the neutrino. Hypothesized in 1930 to account for missing energies in some radioactive decays, neutrinos (and antineutrinos) were first detected in the 1950s around nuclear reactors, and later from the Sun, from supernovae and from other cosmic sources. But neutrinos are notoriously hard to detect, and they’re increasingly hard to detect the lower their energies are. 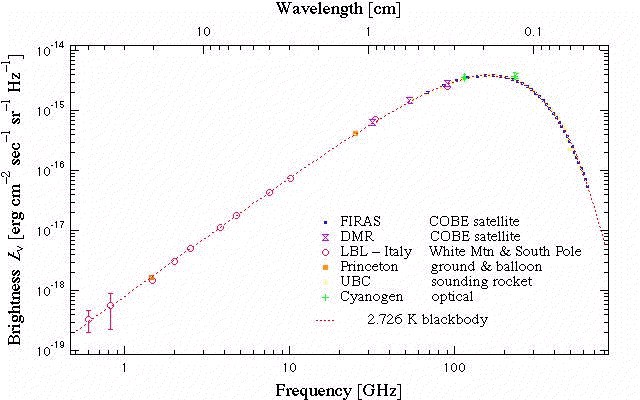 That’s a problem, and it’s a big problem for cosmic neutrinos in particular. You see, by time we come to the present day, the cosmic microwave background (CMB) is only at 2.725 K, less than three degrees above absolute zero. Even though this was tremendously energetic in the past, the Universe has stretched and expanded by so much over its 13.8 billion year history that this is all we have left today. For neutrinos, the problem is even worse: because they stop interacting with all the other particles in the Universe when it’s only about one second after the Big Bang, they have even less energy-per-particle than the photons do, as electron/positron pairs are still around at that time. As a result, the Big Bang makes a very explicit prediction:

That comes out to ~1.95 K for the CNB, or energies-per-particle in the ~100–200 micro-eV range. This is a tall order for our detectors, because the lowest-energy neutrino we’ve ever seen is in the mega-eV range. 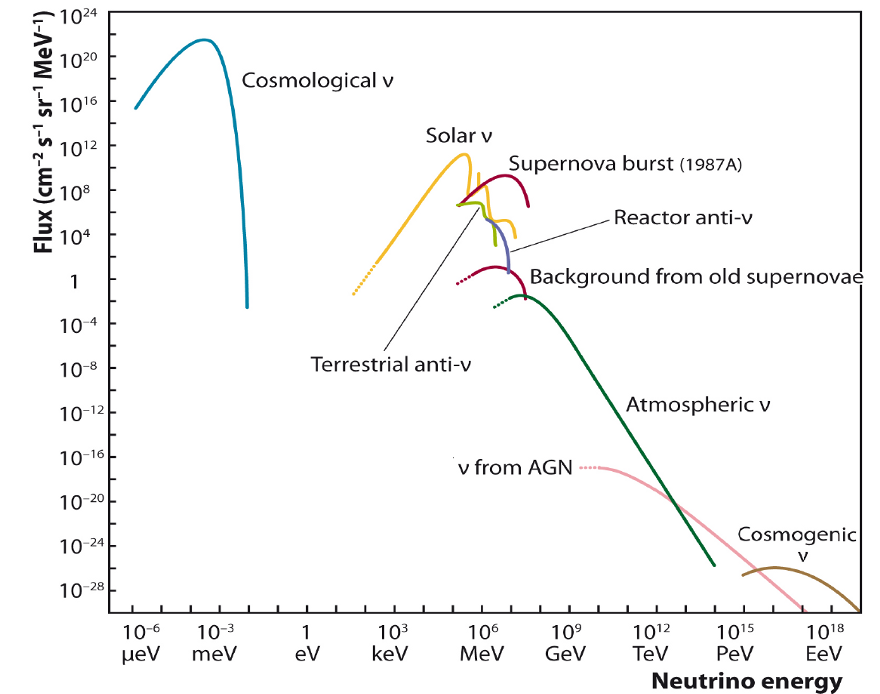 Image credit: IceCube collaboration / NSF / University of Wisconsin, via https://icecube.wisc.edu/masterclass/neutrinos. Note the huge difference between the CNB energies and all other neutrinos

So for a long time, it was assumed that the CNB would simply be an untestable prediction of the Big Bang: too bad for all of us. Yet with our incredible, precise observations of the fluctuations in the background of photons (the CMB), there was a chance. Thanks to the Planck satellite, we’ve measured the imperfections in the leftover glow from the Big Bang. 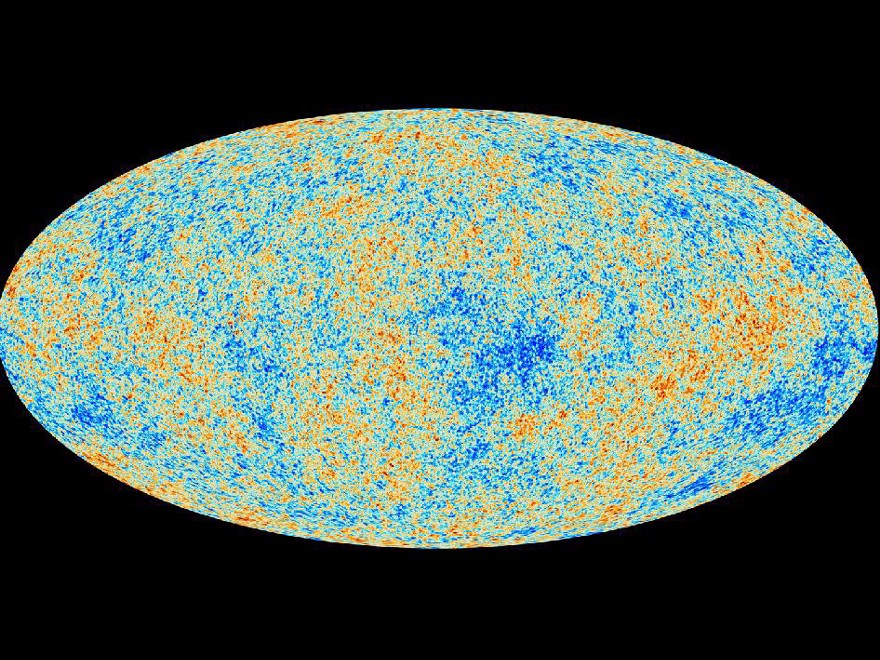 The fluctuations in the Big Bang’s leftover glow. Image credit: ESA and the Planck Collaboration.

Initially, these fluctuations were the same strength on all scales, but thanks to the interplay of normal matter, dark matter and the photons, there are “peaks” and “troughs” in these fluctuations. The positions and levels of these peaks and troughs tells us important information about the matter content, radiation content, dark matter density and spatial curvature of the Universe, including the dark energy density. 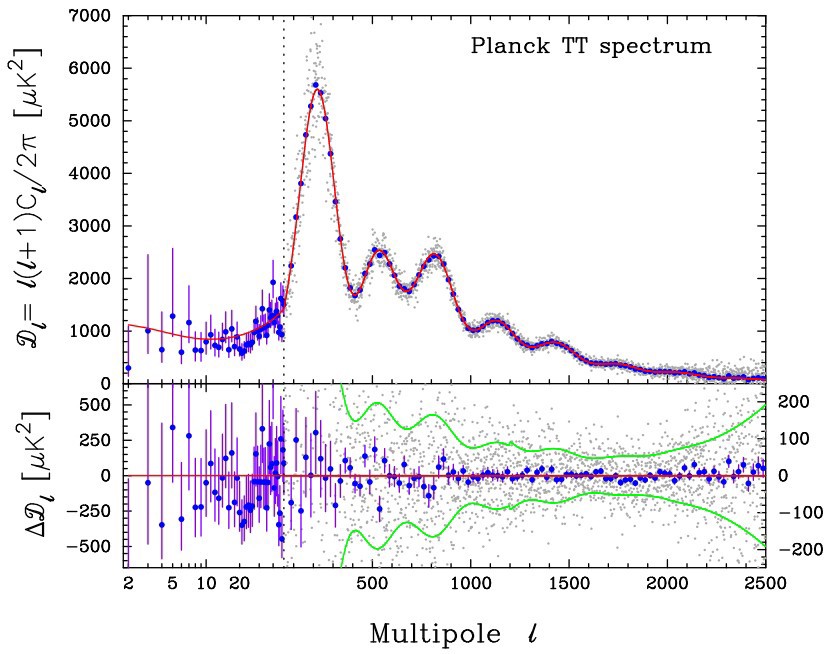 The best fit of our cosmological model (red curve) to the data (blue dots) from the CMB. Image credit: Planck Collaboration: P. A. R. Ade et al., 2013, A&A, for the Planck collaboration.

There’s also a very, very subtle effect: neutrinos, which only make up a few percent of the energy density at these early times, can subtly shift the phases of these peaks and troughs. This phase shift – if detectable — would provide not only strong evidence of the existence of the cosmic neutrino background, but would allow us to measure its temperature at the time the CMB was emitted, putting the Big Bang to the test in a brand new way. 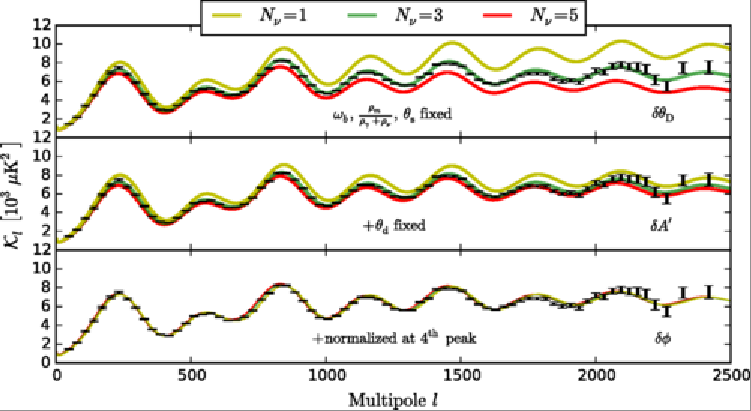 Last year, a paper by Brent Follin, Lloyd Knox, Marius Millea and Zhen Pan came out, detecting this phase shift for the first time. From the publicly-available Planck (2013) data, they were able to not only definitively detect it, they were able to use that data to confirm that there are three types of neutrinos — the electron, muon and tau species — in the Universe: no more, no less. 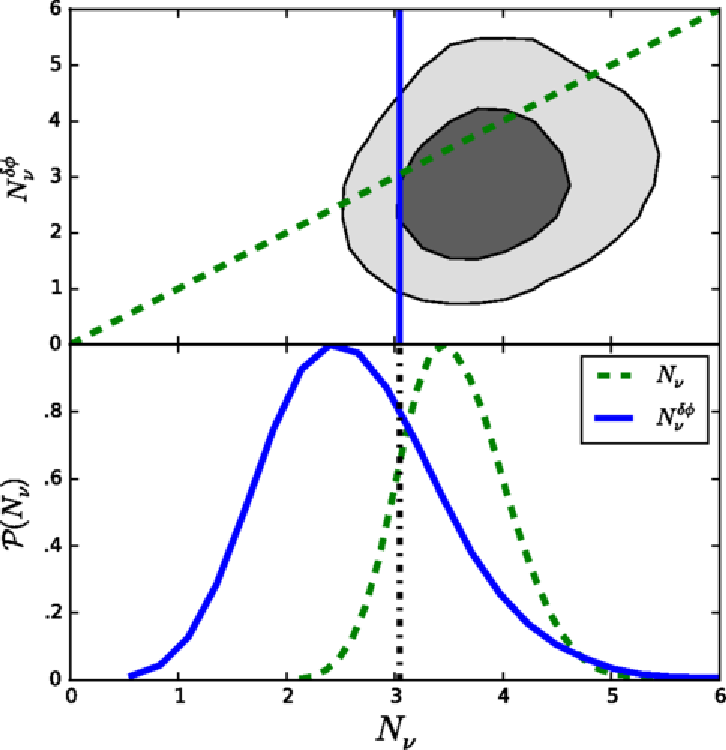 What’s incredible about this is that there is a phase shift seen, and that when the Planck polarization spectra came out and become publicly available, they not only constrained the phase shift even further, but — as announced by Planck scientists in the aftermath of this year’s AAS meeting — they finally allowed us to determine what the temperature is of this Cosmic Neutrino Background today! (Or what it would be, if neutrinos were massless.) The result? 1.96 K, with an uncertainty of less than ±0.02 K. This neutrino background is definitely there; the fluctuation data tells us this must be so. It definitely has the effects we know it must have; this phase shift is a brand new find, detected for the very first time in 2015. Combined with everything else we know, we have enough to state that yes, there are three relic neutrino species left over from the Big Bang, with the kinetic energy that’s exactly in line with what the Big Bang predicts.

Two degrees above absolute zero was never so hot.

Astrophysicist and author Ethan Siegel is the founder and primary writer of Starts With A Bang. Follow him on Twitter, Facebook, G+, Tumblr, and order his book: Beyond The Galaxy, today!