We need to understand and fight against oppression in whatever arenas it occurs. Organizing like that of Black Lives Matter or the Dreamers or against sexual assault on campus shows us that, important as they are, support for minimum wage and unions is not enough. It shows us as well that intersectionality is not just about privilege but about the fight against the institutions, the system of oppression. 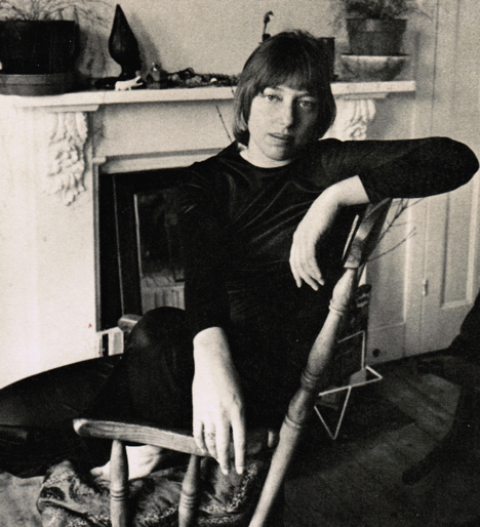 This year is the 50th anniversary of the publication of Juliet Mitchell’s pamphlet “Women: The Longest Revolution.” Written just three years after Betty Friedan’s The Feminine Mystique, Mitchell’s work garnered nowhere near the notoriety of Friedan’s. It was, nonetheless, as important. Around August 26, 2016 — the 96th anniversary of the passage of the 19th amendment to the Constitution granting women in the United States the vote — we reflect on the contribution of Juliet Mitchell to our understanding of the struggle for women’s liberation and socialist feminism.

Though the term “socialist feminist” did not appear in print until some six years later, “Women: The Longest Revolution” set the stage for a dramatic reworking and refocusing of what had been called by many leftists (and is today) “The Woman Question.”

Mitchell recounts the development of Marxist thought on the situation of women in society. From Friedrich Engels’ The Origin of the Family, Private Property and the State (1884; English edition, 1902) to August Bebel’s Woman and Socialism(1879; English edition,1910), the Left has considered the issue of the status of women purely in economic terms, while feminists had typically framed it as a function of legal rights. Mitchell quotes Engels from Origin thus:

". . . the emancipation of women and their equality with men are impossible and must remain so as long as women are excluded from socially productive work and restricted to housework, which is private. The emancipation of women becomes possible only when women are enabled to take part in production on a large, social scale, and when domestic duties require their attention only to a minor degree."

Philosopher Simone De Beauvoir’s The Second Sex (1949; English edition, 1953) is described by Mitchell as the greatest single contribution to the subject of women’s oppression to that time, but, she notes, “interestingly socialism as such emerges as a curiously contingent solution at the end of the work, in a muffled epilogue.”*

Mitchell takes a great leap in proposing that the oppression of women must be seen as coming from a matrix of origins: production, reproduction, socialization of children and sexuality. She describes how advances in one of these areas are offset by losses in another. Thus women’s liberation can only be achieved by fighting on all fronts.

Mitchell’s work was a focus of discussion in the British Left (Mitchell’s home) but became known in the United States largely because of the work of the Chicago Women’s Liberation Union (CWLU). In 1971, one of the chapters of CWLU (called The Midwives of the Revolution) proposed a strategic approach to organizational program based on Mitchell’s work.

Their proposal, “Some Thoughts on Program,” argued “for a program and strategy which emphasizes struggle on many different levels, none of which is a clear priority over the others, and none of which is adequate without the development of the others.”

To illustrate this idea of a multidimensional, multifaceted program to struggle against the oppression of women, the Midwives credited Mitchell and said that they

"conceived of making a visual chart. Along one side are the four major roles into which women are placed in American society – roles which oppress us.  First is our role in production (as surplus, menial, malleable labor force; domestic workers and keepers of the work force); second is reproduction (being responsible for the reproduction of the race); third is sexuality and fourth is our role as socializers of children."

Those are Mitchell’s four categories of the sources of oppression. The Midwives recognized that an understanding of women’s oppression must be coupled with a strategy to fight that oppression, and so they added dimensions of struggle (service, education, direct action) to complete the chart, drawing upon André Gorz’s Strategy for Labor (1964; English edition 1967).

Underscoring the conviction of early CWLU activists of the intersection of multiple systems of oppression, the Midwives’ paper recognized:

"[T]his is just a two dimensional chart. It helps us look at different types of program necessary to organize around women's oppression as women. But it is clear that women are not only oppressed as women, but are also part of all other oppressed groups within this society (e.g., blacks, workers, students, gay people). Because of women's interrelatedness to all of society we must have a view of program which says that our oppression as women cannot be separated from the oppression of all other groups. That means that our movement must work on program which struggles against all kinds of oppression and must respond specifically to the ways the oppression of these groups affects women in them."

This paper and what came to be called the “Mitchell chart”

This paper and what came to be called the “Mitchell chart” were very influential in the CWLU. (An example showing some of the programs of CWLU is included here.) 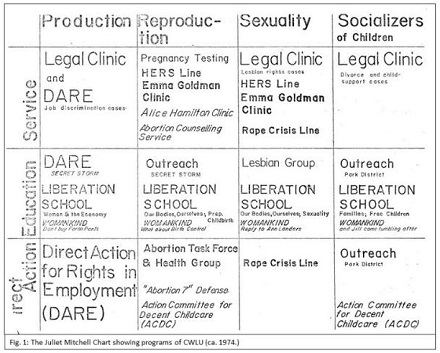 Discussion of the strategic program proposal in “Some Thoughts on Program” took place at the second CWLU conference in April 1971. A lively debate resulted in the adoption of the chart as a tool for CWLU planning and strategy. In the course of the debate, the strategic areas were changed to reflect the outward oriented work of the organization: direct action, education, service. Throughout the remainder of CWLU’s existence, the Mitchell chart guided the organization’s work.

Two lessons from Juliet Mitchell’s work and from its use by CWLU stand out:

The interaction between theory and practice is crucial if we’re going to advance our agenda. It is not, of course, always easy. Simply becoming conversant in Marxist theory will win us only a few supporters, but trying to understand what that theory means, and how we can put it into practice, will. As Marx wrote in "Theses on Feuerbach" (1845), “The philosophers have only interpreted the world, in various ways. The point, however, is to change it.”

A chart may seem like a rather prosaic way to proceed, but sometimes a simple chart can help determine what important issues/organizing/outreach might be missing from our work. And it might be able to help us focus our limited resources on the most important areas. Today’s Mitchell chart would look different from that of fifty years ago – it might very well have more dimensions than that first effort. It would be informed by what we’ve learned in the past decades.

Bringing about a socialist revolution is about more than just overthrowing capitalism. While identity politics and democratic socialism may not simply run in parallel, we ignore at our own risk identity politics/intersectionality/or whatever is the correct phrase today. We need to understand and fight against oppression in whatever arenas it occurs. Organizing like that of Black Lives Matter or the Dreamers or against sexual assault on campus shows us that, important as they are, support for minimum wage and unions is not enough. It shows us as well that intersectionality is not just about privilege but about the fight against the institutions, the system of oppression.

Juliet Mitchell’s “Women: The Longest Revolution” gave us an important starting point for understanding the connection between socialism and feminism. Through Mitchell and Italian Marxist Antonio Gramsci and current thinkers and activists like historian Linda Gordon, we can chart the next steps in that longest revolution. The gains of the last fifty years provide a solid base for the next phase as the revolution continues.

*The version available online (“Women: The Longest Revolution”) is actually an excerpt from Mitchell’s later work, “Women’s Estate” published in 1971. This is similar to the original, but not identical.

Christine R. Riddiough serves as a vice chair of DSA and was a member of the Chicago Women's Liberation Union.