“The horrible night has ceased,” said Santos, quoting a phrase from Colombia’s national anthem. ‘I can’t believe this is really happening. This is a great day for Colombia,’ says Alonso Cardoza from the remote town of Uribe where the Revolutionary Armed Forces of Colombia formally took its name. 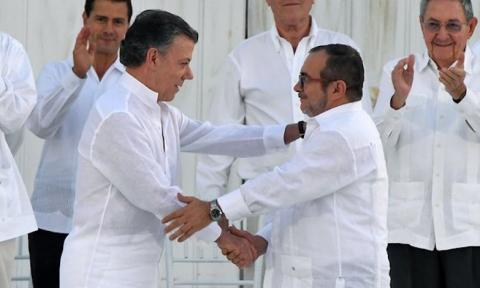 They watched from a region that came to be known as Farc’s headquarters as, 800km (500 miles) away in Cartagena, a peace deal was signed between the government and guerrilla force to end 52 years of war.

Using a pen fashioned out of the spent casing of a rifle bullet, Colombian president Juan Manuel Santos and leftist rebel leader Timochenko signed a peace deal between the government and Farc rebels, closing a long, bloody chapter of this country’s violent history.

As night fell over the colonial walled city of Cartagena, Timochenko, whose real name is Rodrigo Londoño, said: “Our only weapons will be our words.

“In the name of the Farc I ask sincere forgiveness to all the victims of the conflict and for all the pain we may have caused in this war,” he said to resounding applause from the audience.

People celebrate in Bolivar Square in Bogota, the signing of the peace agreement between the Farc and the Colombian government. Photograph: Leonardo Munoz/EPA

The ceremony that ended the conflict held a particular resonance for the residents of Uribe, most of whom have known nothing but war.

“I can’t believe this is really happening. This is a great day for Colombia,” said Alonso Cardoza, 31, who lost his left leg to a bomb during a three-day Farc attack on the town centre in 1998, when he was 14 years old.

He watched silently as Santos and Timochenko signed the deal and the church bells rang.

In Cartagena, dignitaries from around the world, including the UN secretary general, Ban Ki Moon, and the US secretary of state, John Kerry, as well as hundreds of victims of the war – all dressed in white – acted as witnesses to the historic event ending Latin America’s longest-running war.

Under the accord, Farc has vowed to sever all ties with the drug trade, hand over all its weapons and convert into a political party. A special tribunal will try war-related crimes but those who confess to crimes against humanity will serve alternative sentences that do not involve jail time.

On Sunday, Colombian voters will be asked whether they approve Monday’s deal, reached after four years of negotiations in Havana.

While polls show a majority of voters will vote yes, some of its provisions – such as no jail time for those who confess to crimes such as kidnapping, killings and child recruitment – are hard for many Colombians to accept. Before the ceremony opponents to the deal, including the former president Álvaro Uribe, protested against the accord in the streets of Cartagena shouting: “Santos is a traitor.”

If approved, the Farc’s estimated 7,000 fighters and urban militia members will begin concentrating in 28 zones across the country to begin their disarmament and reintegration in to civilian society, handing in their arsenal of weapons to a UN mission within five months.

The agreement has won broad international support. Kerry, who said the US would consider removing the Farc from the US list of terrorist organizations after the agreement, lauded the deal, telling conflict victims and former combatants in Cartagena: “Anybody can pick up a gun, blow things up, hurt other people, but it doesn’t take you anywhere ... Peace is hard work.”

Residents of Uribe know peace won’t be easy. “This municipality has suffered the rigors of war,” Luis Alfredo Arias, the town’s deputy mayor, told residents gathered to watch the signing. “Now we must work hard so that peace becomes a reality.”

The Farc was born in 1964 after a government airstrike on a peasant enclave on Tolima province, but formally took the name Revolutionary Armed Forces of Colombia two years later in a rural area of Uribe.

Since then this municipality has been considered Farc territory, witnessing its expansion from a small group to a powerful rebel force, and repeated failed attempts to reach a peace deal between the guerrillas and a succession of governments.

Shopkeeper Noel Segura, 70, from Uribe, says he has suffered from the war nearly his entire life. ‘It’s time to try peace for a change.’ Photograph: Sibylla Brodzinsky for the Guardian

Noel Segura, 70, has seen it all. He points to two holes in the roof of his store – where he sells everything from toothpaste to barbed wire – the result of one of the many battles between the Farc and the army.

“Almost every day there would be firefights,” he said. “At night we slept on mattresses under the beds to protect us from stray bullets. We lived with a bag packed ready to run if things got too bad.”

Segura was forced to flee from his home three times because of the violence – once by the military, once by rightwing paramilitary groups and another time under threat from the Farc.

Like many people of this town and across Colombia who have suffered the war, it is hard for Segura to believe peace is possible. But he’s willing to try.

“We know war. I figure it’s time to try peace for a change, even if we regret it three or four years from now” he says.