The numbers on global warming are even scarier than we thought. The future of humanity depends on math. And the numbers in a new study released Thursday are the most ominous yet. 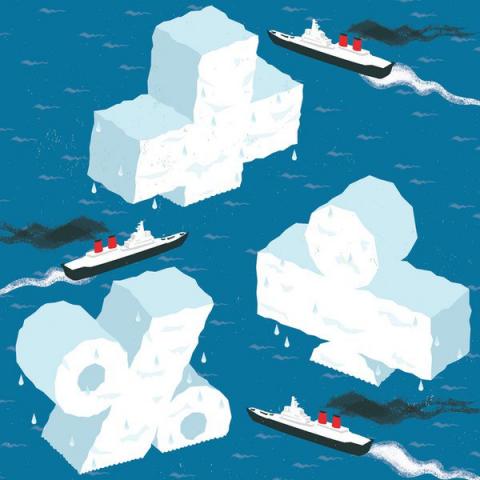 "Keeping it in the ground" does not mean stopping all production of fossil fuels instantly. "If you let current fields begin their natural decline," says Kretzmann, "you'll be using 50 percent less oil by 2033." That gives us 17 years, as the wells we've already drilled slowly run dry, to replace all that oil with renewable energy. That's enough time-maybe-to replace gas guzzlers with electric cars. To retrain pipeline workers and coal miners to build solar panels and wind turbines. To follow the lead of cities like Portland that have barred any new fossil fuel infrastructure, and countries like China that have banned new coal mines. Those are small steps, but they're important ones.

Even some big unions are starting to realize that switching to renewable energy would add a million new good-paying jobs by 2030. Everyone from nurses to transport workers is opposing the Dakota pipeline; other unions have come out against coal exports and fracking. "This is virtually unprecedented," says Sean Sweeney, a veteran labor and climate organizer. "The rise of `climate unionism' offers a new direction for the labor movement." And if it spreads, it will give Democratic politicians more room to maneuver against global warming.
But to convince the world's leaders to obey the math-to stop any new mines or wells or pipelines from being built-we will need a movement like the one that blocked the Keystone pipeline and fracking in New York and Arctic drilling. And we will need to pass the "Keep It in the Ground Act," legislation that would end new mining and drilling for fossil fuels on public land. It's been called "unrealistic" or "naïve" by everyone from ExxonMobil to the interior secretary. But as the new math makes clear, keeping fossil fuels in the ground is the only realistic approach. What's unrealistic is to imagine that we can somehow escape the inexorable calculus of climate change. As the OCI report puts it, "One of the most powerful climate policy levers is also the simplest: stop digging." That is, after all, the first rule of holes, and we're in the biggest one ever.
This is literally a math test, and it's not being graded on a curve. It only has one correct answer. And if we don't get it right, then all of us-along with our 10,000-year-old experiment in human civilization-will fail.
[Bill McKibben is the Schumann Distinguished Scholar at Middlebury College and co-founder of the climate group 350.org.]