When the Election Is Over, It Will Not Be Done

What to expect if Trump loses? More attempts at gridlock, and more anger, and an ever-widening opening for the extremist right to dig their heels further into the GOP. 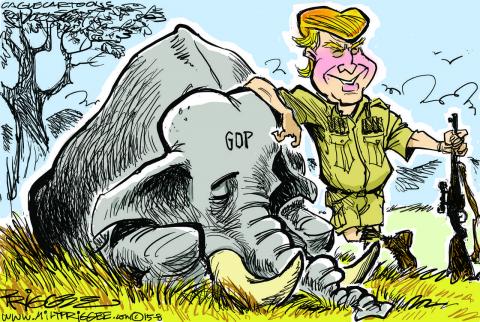 They're stoked by bitterness, anger, and the unbearable color of others, and they're buying into Donald Trump's trope that the election, indeed society, is rigged against them. At his rallies, they love to wear obscene-laced t-shirts, and when Hillary Clinton's name is mentioned, they come alive with chants of "Lock her up." They revile fact checking and are disgusted, not by Trump's predatory behavior and despicable comments about women, but by the way the media has reported it. And, when the election is over, and Trump has moved on to attempting to build a multi-media empire, or perhaps to an all-expenses-paid Dacha in the Russian countryside, his supporters will be holding a bag of steaming anger.

And the anger of those supporters could make the era of the Tea Party look like, well … a tea party.

A question being batted around these days is: How will the Republican Party deal with its far-right extremists; white nationalists, neo-Nazis, and alt-righters if Trump loses? How will it reckon with the theocratic Christian Right, many of whom – Jerry Falwell, Jr., Dr. James Dobson, Ralph Reed, Tony Perkins, to name a few – were all in with their support for Trump, when they start clamoring for an authentic conservative Christian evangelical candidate in 2020?

In 2013, the Republican Party earnestly issued what was characterized as an "autopsy"; an examination of what wrong in the 2012 presidential election. Party analysts looked at why they lost, and what could be done differently. One of the areas the autopsy focused on was how to improve outreach to minority communities: "We need to campaign among Hispanic, black, Asian, and gay Americans and demonstrate we care about them, too." Questions about how the GOP could become a more inclusive party were asked and discussed.

Although Party leaders never really seemed to take the report's recommendations seriously – and Donald Trump's ascendancy over the past two years helped make that nearly impossible. If Trump loses, one can only imagine what the 2017 Autopsy might be like.

Just as many on the right thought, and acted, as though the presidencies of Bill Clinton and Barack Obama were illegitimate, there is little evidence to think those attitudes will change with a Hillary Clinton presidency. Arizona Senator John McCain has already declared that no Hillary Clinton appointee to the Supreme Court will pass out of a Republican-controlled Senate.

Besides the coterie of right-wing extremists, the Party will have to deal with struggling white working class families that have bought into the Trump vision. This could provide an opportunity for growth, if their nascent populism is somehow channeled into the Party.

As the Seattle Times' Jerry Large recently wrote, Trump "appeals to people who feel they are under siege and no one in power is listening. In some cases they're right but other times they and their candidate sling mud in every direction without justification.

"They worry about unfairness in the economy, about national security and dysfunction in politics," he added. "Lots of people are concerned about those things. But Trump's core turns its anger toward people who aren't the cause of their problems: immigrants, minorities. They're not bothered that he demeans whole groups."

The Atlantic's Michelle Cottle sees "nothing good" coming if Trump loses. While Trump will still be whole after the election, "millions of Americans who have looked to Trump to save them. … the angry, white, blue-collar workers who are outraged or terrified that America has become some topsy-turvy multi-cultural nightmare where a hard-working man cannot make a decent living anymore — will emerge from this circus worse off than before."

So, what to expect at the dawn of a Hillary presidency? Gridlock, and more anger, and an ever-widening opening for the extremist right to dig their heels further into the Party.
_______

About author Bill Berkowitz is a longtime observer of the conservative movement. His Conservative Watch columns document the strategies, players, institutions, victories and defeats of the American Right.