Israeli politics has been shifting rightwards for decades, but this new coalition could go further than any before 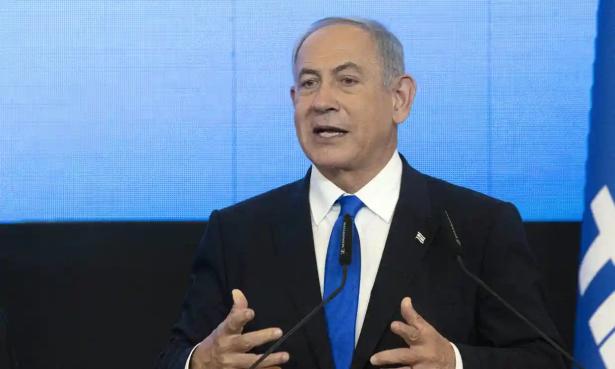 The host was immediately joined by a comedian sporting round glasses, a yellow tie, white kippah and bulging fake belly, made up to look like the country’s new political kingmaker, the extremist Itamar Ben-Gvir. Brandishing a pistol – as Ben-Gvir did recently in a Palestinian neighbourhood of occupied East Jerusalem – he danced his way across the set before taking a seat.

“We love democracy,” the actor said, a grin on his face. “We’re going to miss it.”

Israeli politics has been shifting rightwards for several decades, but Ben-Gvir’s unprecedented success in this week’s election marks a new, dangerous turn. Bereft of necessary coalition partners after breaking promises in the past, Netanyahu, leader of the Likud party, engineered a merger between three fringe far-right parties in 2021, ushering the new Religious Zionists slate into the political mainstream.

In the short term, the move has paid off: his extremist allies have doubled their number of seats to 13 or 14. With 86% of the votes counted, Netanyahu’s rightwing bloc has a 65 seat lead - more than enough for a relatively stable majority government in the 120-seat Knesset.

Long term, however, Netanyahu may regret it. The Religious Zionists’ list’s chair, Bezalel Smotrich, is the co-founder of an organisation which pursues legal action against Palestinian building in Israeli-controlled areas of the occupied West Bank. He wants legislative reform to incorporate traditional religious Jewish law, and is virulently against Jewish-Palestinian co-existence and gay rights.

Ben-Gvir, the slate’s charismatic deputy with a large and youthful following, is a former follower of the far-right terrorist Rabbi Meir Kahane. He built a legal career defending Jewish extremists, and in the past called for the deportation of Palestinian citizens of Israel, who make up 20% of the population.

Other members of the list have set up armed militias, called for the reinstatement of the death penalty, and expressed support for Russia’s invasion of Ukraine.

Both Smotrich and Ben-Gvir are advocates for politicising the Israeli judiciary and giving parliament power to override court decisions they don’t like, which would benefit Netanyahu, who sees getting back into office as the best way to overturn his corruption trial.

Netanyahu also opposes the establishment of a Palestinian state, but otherwise does not share most of his new partners’ beliefs. Infighting during the campaign suggests he doesn’t even like them: he is more used to presiding over coalitions with centrist and centre-left elements. But as the force which propelled him back into power, the debt to his new allies is sizeable.

Even if Netanyahu can temper some of their more extreme ideas, the Religious Zionists are bound to drag the Likud’s already hawkish policies further to the right. Both Smotrich and Ben-Gvir expect to receive important cabinet positions, and have already lobbied for control of the justice, defence, finance, and public security ministries.

In the run-up to Tuesday’s election, Israel’s fifth in just four years triggered by the country’s inability to decide on Netanyahu’s suitability to govern, many disillusioned Arab Israelis and brutalised Palestinians observed the campaigning with indifference. On Wednesday morning, the enormity of what transpired was sinking in.

By some measures, this year is already the deadliest in the Israeli-Palestinian conflict since 2005; fighting in the north of the West Bank between Palestinian militias and the Israel Defence Forces has been raging since March. A return to peace talks now belongs in the realm of fantasy.

A Religious Zionist politician said on Wednesday afternoon that he “certainly thinks and hopes” that the new coalition will change the status quo on Jerusalem’s sensitive Temple Mount – an issue that helped spark war as recently as last year.

“Maybe the far right getting in will be a good thing. These people don’t sugarcoat racism and violence the way other Israeli politicians do. The fig leaf will be gone,” said Prof As’ad Ghanem, a political sciences lecturer at the University of Haifa and co-author of Israel in the Post Oslo Era.

“They might take steps against Palestinians in Jerusalem and the West Bank and the Negev, yes. But liberal governments around the world who say they care about Palestinian rights will not be able to stand aside anymore. A fully rightwing Israeli government will expose what is already there.”

A major voting demographic for the Religious Zionists are hardcore Israeli settlers, living illegally in the West Bank. They attack Palestinian children on the way to school, appropriate land, burn olive trees and steal sheep. In short, their aim is to make life for Palestinians unbearable.

With their representatives likely to take up the mantle of government in a few weeks’ time, the question now troubling people on both sides of the Green Line is: how much worse do things have to get before they get better?

Bethan McKernan is Jerusalem correspondent for the Guardian. Twitter @mck_beth