ROP organizers have shown great courage, educating about - and standing up to - right-wing militia groups in rural Oregon. This post suggests important actions that the rest of us can take. 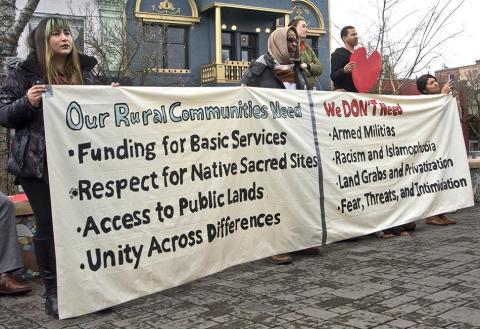 Many of us across Oregon are reeling after the acquittal of the Bundys and some of the Malheur National Wildlife Refuge occupiers. How can seven people who orchestrated a 41-day armed standoff that held an entire community hostage be acquitted, especially on the same day over 100 indigenous water protectors in North Dakota were shot at, beaten, and arrested?

Some media are repeating the false Bundy talking point that this acquittal is “a victory for rural communities”. Which rural communities? Talk to the residents of Harney County, and residents of neighboring Eastern Oregon counties where militia activity is widespread, and they will tell you that the acquittal puts a target on their backs if they speak up for the simple right to air political opinions that dissent from the militias. The Burns Paiute Tribe are pointing out the hypocrisy and insult of so-called patriots claiming tribal land as their own, threatening tribal leadership, desecrating the land, damaging and stealing tribal artifacts during the occupation, and getting away with it scot-free.

We are seeing militia members celebrate and claim the acquittal as a victory; an affirmation of their tactics, which include claiming to represent entire communities they don’t actually reside in, while using intimidation, threats of violence, and vandalism to silence critique and political opposition. This verdict has sent a message that these tactics are not only effective, but also go without consequence.

Whatever the reason for the verdict, it has greatly increased the anxiety felt by rural Oregonians. Many worry their community could be next. Rural Oregonians, and especially the residents of Harney County, have already experienced months of harassment and intimidation by Oath Keepers, Three Percenters, and other paramilitaries just for disagreeing. Militia supporters have threatened violence toward critics (including the Rural Organizing Project), indigenous leaders, law enforcement, and even the Governor of Oregon. This decision leaves many people in fear.

It is impossible to ignore the racism of the militia land seizure in Harney County, the acquittal, and even the Federal charges themselves. At no time in this process was justice sought for the seizure and desecration of the Burns Paiute Tribe’s unceded lands, arguably the most egregious crime committed by these so-called patriots. We also see this structural racism mirrored in the news from North Dakota, where unarmed indigenous people, defending their Treaty lands from being bulldozed for an oil pipeline, are faced with militarized state police committing violence on the behalf of corporations. Meanwhile, in Oregon, armed white militia members face no consequences for holding a community hostage for over a month, running rampant over sacred ground. Many of the officers involved in the military intervention in Standing Rock hail from rural areas just like ours where emergency services are already stretched past their limit, yet they are being committed to act as publicly funded rent-a-cops for an oil conglomerate. The assumption that our rural communities support these actions is simply wrong.

This acquittal reminds many rural Oregonians once again that we must fight to overcome our isolation. Our rural communities across the state are struggling to stay connected, to repair damaged social ties and institutions ravaged by years of recession. Armed militia groups offer only more divisions, fostering a culture of fear that raises temperatures in our communities. In fact, Patriot groups in Oregon and corporations trying to advance the Dakota Access Pipeline in North Dakota thrive on our division, pitting us against each other and making us believe that we are marginal. Militias and so-called Patriot groups have grown in power in rural communities in Oregon largely because of the vacuum left by decades of divestment and neglect that have created massive crises in social services and safety nets, from 911 dispatch to schools. Rural Oregonians are feeling more vulnerable than ever before.

Let’s come together as human dignity leaders, activists, concerned community members, and neighbors to tell the real story of rural Oregon. We all know that people do not support or join insurrectionist movements if their needs are met. We need to build security for rural communities if we want this crisis to end. This means holding our political leadership accountable to rural Oregonians, coming together with our neighbors to envision how we want our communities to look, and doing the hard work of organizing to see that vision through to becoming a reality.

As rural Oregonians, we call upon our elected officials and urban friends to show up for rural communities as we struggle for basic decency and opportunity. No Oregonian should have to fear that a loved one will be followed home by a militia member or worry that their 911 call will go unanswered. Living in our state must come with a shared commitment to fund a baseline level of vital services in every Oregon county.

We need 24-hour a day, 7-day a week 911 service, public education, and public libraries. We need access to affordable healthcare and mental health resources. We need new economic engines that do not rely on natural resource extraction. We need meaningful and dignified jobs that pay living wages. We need safety nets that actually catch the most vulnerable in our communities.

Rural Oregonians deserve the opportunity to determine what is acceptable in our communities and to know that violence will not be condoned against the people for any reason, corporate or private.

We invite you to edit, add to, use, and share this statement as your own. Send an open letter to your community from your human dignity group. Use this to craft a letter to the editor. Start a local social media campaign. Let’s tell the real story of rural Oregonians and what our priorities are: creating solutions that work for all of us, not just for those who have the most guns.

Our History: the Evolution of the Rural Organizing Project

According to conventional wisdom, the Left fails to talk values with voters, particularly voters in rural (now “red”) communities. Beneath this popular story line is a more complex reality. Rural voters care about values, yes – but those values are not necessarily conservative. For over twelve years, the Rural Organizing Project has used values-based organizing to advance a progressive vision of democracy in Oregon, the 10th largest state in the country where all 36 counties have a rural profile.