books A Solid Trump Exposé That Gives Hillary a Pass

A new book on Donald Trump is as revealing of the foibles and dangers of this reactionary, mysogynistic megalomanic as any honest and brutal piece of opposition research can be. It's also a latent warning of how a future hard right candidate might succeed absent Trump's egregious vulnerabilities. The reviewer faults the book for what it doesn't offer and some readers might expect; any indication that centrist Hillary Clinton is no sure friend of working people. 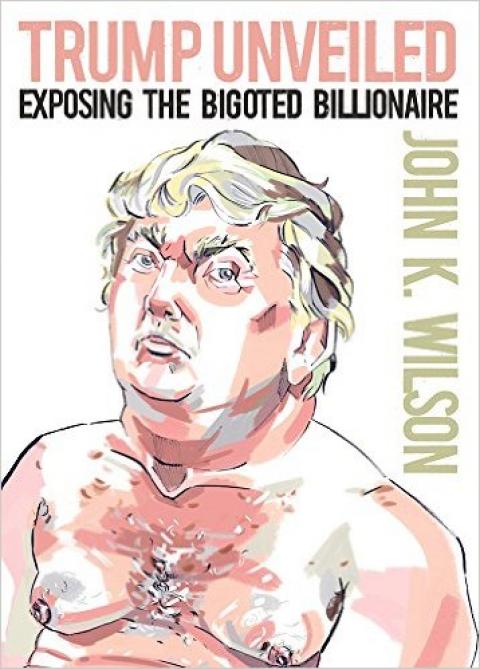 ., OR Books
Trump Unveiled: Exposing the Bigoted Billionaire
By John K. Wilson
OR Books, 256 pages
Paperback:   $16.95
October 13, 2016
ISBN: 978-1-944-869-31-1
November 8 is show time. What will the time tell? The egregious Hillary Rodham Clinton will likely be elected president over the menacing tin pot Donald Trump. Clinton may be the shoddy Brand X, but corporate capital will sleep soundly in its bed with a Clinton presidency and even a Democratic Senate.  Working families will be screwed again, but with more finesse than under a solipsistic Trump diktat. Sure, Hillary’s evasions and saccharine pronouncements pale in comparison to Trump’s Orwellianisms, his fabrications and the unsubtle subtext of his real stance, to “Make America White again.” No wonder Hillary will win.  And by default.

Comes now John K. Wilson, whose Trump Unveiled: Exposing the Bigoted Billionaire, could be subtitled “1,000 Reasons why Donald Trump is the Emperor with no Dick.” Viewed in the context of a political race, Wilson’s is a scorchingly fierce and first-rate piece of opposition research, exhaustive in its profile of Trump as a grifter and misogynistic poseur. Wilson’s read everything. His sourcing is excellent, though his endnotes, which the author will soon make available on line, are not contained in what was unfortunately a rush to get out a timely cost-contained book.  We know Donald is rat poison.  As Falstaff said in Henry IV, Part 1, so we can say of Donald Trump: “There’s neither honesty, manhood, nor good fellowship in thee, nor thou can’st not of the blood royal, if thou darest not stand for ten shillings.”

To be kind, Trump is a character out of Billy Barnes’s ode “I’ve stayed too long at the fair.” To be frank, Trump is a supreme asshole; even the sordid Hillary passes muster  in comparison to the orange peril. His comment alone at the Las Vegas food-fight cum debate that “we have no country if we have no border” ranks among the worst sort of nativist toxin. He defines country itself not as a homeland but as a combination prison/elite club. The scent is unmistakable. As George Orwell put it in “The Lion and the Unicorn”: “One cannot see the modern world as it is unless one recognizes the overwhelming strength of patriotism, national loyalty…Christianity and internationalism are as weak as straw in comparison to it.” Trump may be the bumbling sorcerer's apprentice, but he’s gotten a following.

With days before the agony of this election cycle is over, we know much of that. So why another exposé of Trump, even if the elements Wilson unloads about Trump, both the cartoonish and the instructive, are legion?  I think the reason Wilson’s book is worth reading and keeping is that we will forget what even a bad actor like Trump can do, and that a less flawed future candidate presenting themselves as a redeemer  might actually sell. A less mannequin-like pretender could come again, making a critique of the failing consensus, but in a faux populist pose that is itself both toxic and saleable.

Trump’s is a gargantuan ego that justifies petty revenge as key to business success. Even his lies are masked in what he brags is “truthful hyperbole.” His is an almost studied indifference to facts, has the military acuity of a six-year old and an instinctive urge to, in Wilson’s words, “engage in brutal, merciless violence with little regard to the consequences. Whenever faced with a threat to American interests, Trump would bomb first, steal oil second and ask questions later.”

Wilson shows Trump to be an inveterate racist and misogynist—case closed. These are just Trump’s characterological flaws, and the book is a compendium of his whacked and ill-informed fantasy positions on virtually everything. In isolation, Wilson’s is a masterful compilation of Trump’s intellectual and moral crimes.

The books is also a tough read, like surveying the poisons at a toxic-waste dump site. Tough, but fair.  At its most brutal, Wilson’s is like taking stock of sins in a world without gods or justice.  The experience is like watching a montage of lynchings. Be prepared.

What also bears knowing, and what Wilson doesn’t deal with, is why Trump is idolized by so many who would be his victims. Why is this mad clown popular? Its research strengths aside, what the book doesn’t do is offer a broad enough context.

That lack of context, implicit in its specific topical partisan approach, comes out sharpest in his cavalier dismissal of a trenchant critique made by Chicago activist and acute political observer Marilyn Katz. She, unlike so many liberal Hillary supporters, is encouraged by the many instances of direct confrontation Trump opponents make at Trump’s Nuremburg-like rallies. Wilson says these confrontations, which he doesn’t acknowledge as themselves nonviolent to a fault, actually feed the right by making the left look like bullies and opponents of free speech.

In fact, Katz’s defense of  the demonstrators is nuanced and well-put. Writing in In These Times (3/16/16), Katz responds to a plethora of liberal critics who label demonstrations against Trump as counterproductive and reminiscent of 1960s New Left efforts many today hold as responsible for Richard Nixon’s ascendency. But Wilson doesn’t cite what Katz actually says. Katz wrote that violence at Trump demonstrations is appropriately blamed on his own supporters and the egging on by the puppet master, and that the linking of 1968 and today is spurious to both phenomena. She wrote:

The Democratic Party’s intransigence [in 1968], its unwillingness and inability to hear and incorporate the sentiments of the young, the blacks, the women, the anti-war sentiments and the ugly brutality of the state—all of those things suppressed the vote and brought on the Nixon victory. After being shunned by our elders, attacked by the party and the police force of its leader, did anyone really think we were going to go out and vote for Humphrey? The nation hated the war and after the deaths of King and Kennedy and the bloodying of the young in Chicago, seeing the party as the defender of democracy and civil rights was a stretch.

It was the police riots that caused the violence, as the pathbreaking Kerner Commission report made clear. Or as then-Chicago Mayor Richard Daley malaproped, “The police are not there to cause disorder; they are they there to preserve disorder.”

Katz  is right about 1968, and today. The counter demonstrators at Trump rallies are not the provocateurs. While Wilson has a right to his tactical reservations—the left is not sacrosanct—his not offering Katz’s reasoning, which is sound and to me self-evident, is a lapse.

In looking at the far right, Bob Dylan’s sentiment in “Restless Farewell” has it correct.

“Oh, every foe that ever I faced,
The cause was there before we came.
And ev'ry cause that ever I fought,
I fought it full without regret or shame”

So while Wilson is definitive on Trump writ small and gives readers at least the basis for going farther and teasing out why the Donald might be attractive to some voters, there is a hole in the analysis. Trump is also attractive because Hillary is what she appears to be—more of the same politics as stasis.  What’s missing in Wilson’s narrative is a corresponding  critique of the Democrats and how the entire Hilary Clinton oeuvre is emblematic of a reigning concession to and an enabling of global capitalism. Doug Henwood’s masterly 2016 study of HRC—My Turn: Hillary Clinton Targets the Presidency, produced by OR Books, Wilson’s publisher—is a good counterpoint.  Read them both.

Given how Trump’s overkill takes the form of intense disgust for both parties, even mainstay conservative writers are not amused. The Wall Street Journal’s Bret Stephens (WSJ 10/25) writes that “if I can’t get my Grand Old Party Back, I’d rather build a new one,” with which he means one built around such Reaganite verities as relatively open borders, free-trade a la Adam Smith and Milton Friedman, and something nebulous called “culture, civility and character.” Even as egregious a poseur as Glenn Beck is on board about how the GOP has lost its noble moorings. Good luck with that comeback in a world of class-against-class and permanent war, with the US the world’s military hegemon but a debtor to the money-lenders in Beijing. Maybe the greatest crime of the Democrats is that they gave Trump a free ideological ride instead of taking the fight to the GOP, something Bernie Sanders at least offered the ideological frame for doing.

Neither Hillary nor Trump hinted at opposition to the core principles of neoliberalism. Some competition! Some choice!

Will the response to a Hillary presidency by the left be a resurgence of opposition, or will the refrain be, even under a necessarily retrograde Democratic regime, “we’re still better off with Hillary”?

But as Orwell also said (and you can’t quote Orwell too often) about the Communist International's Popular Front strategy, so it can be said of the Democrats under Hilary; it is just an "unholy alliance between the robbers and the robbed." He dismissed the effort as “a combination with about as much vitality, and about as much right to exist, as a pig with two heads or some other Barnum and Baily monstrosity.”  (Sonia Orwell and Ian Angus, eds., The Collected Essays, Journalism and Letters of George Orwell, Vol 1., pp 305, 271.) Among the Democrats' crimes: giving Trump a free ride.

Scarifying as is the truth about Trump, Wilson’s is worth reading as a cautionary tale for the left: that the next atavistic mass candidate won’t be an overt buffoon. That effort could feature a candidate running a better funded, tighter operation, likely in full harness (unlike Trump) to a media- savvy flesh-eater like Alt-Right’s Stephen Bannon, the Breitbart News chief.  If Germany and France’s resurgent far-right parties are models that “he” might even be a “she.”

[Michael Hirsch is a longtime labor journalist, an editorial board member of New Politics and Democratic Left, and one of the many, many Portside moderators. He has taught sociology and labor studies in Boston and New York, worked as a steelworker in Indiana, was for many years a union staffer, and has contributed to The New Statesman, Crain's New York Business, The New York Observer, The Village Voice, The Indypendent, Jacobin, New Labor Forum, Labor Notes and other venues. He is a member of the National Writers Union.]