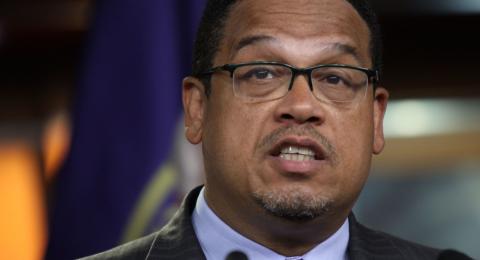 Rep. Keith Ellison warned of Donald Trump in July 2015: "Anybody on the Democratic side of the fence who is terrified of President Trump better vote, better get active, better get involved." , AP Photo

Donald Trump will be in the Oval Office in January, and Republicans will have full control of Congress. But Rep. Keith Ellison — an African-American Muslim from Minnesota — thinks he can lead Democrats back to power.

Ellison, a 53-year-old five-term House member, is already running — although not yet officially — to become the next chairman of the Democratic National Committee. He's been endorsed by incoming Senate Democratic Leader Chuck Schumer (N.Y.), and Sen. Bernie Sanders (I-Vt.). Sen. Elizabeth Warren (Mass.) said it would be "terrific" if Ellison got the job. Other Hill Democrats are lining up behind him, and an online petition supporting his candidacy already has garnered more than 530,000 signatures.

Ellison warned in July 2015 that Democrats had better worry about Trump, which turned out to be prescient.

"Anybody on the Democratic side of the fence who is terrified of President Trump better vote, better get active, better get involved, because this man has got some momentum and we better be ready for the fact that he might be leading the Republican ticket," Ellison said then during an appearance on ABC's "This Week." Although the journalists on the show laughed, Ellison was serious. "We had Jesse Ventura in Minnesota win the governorship; nobody thought he was going to win. I'm telling you, stranger things have happened."

Ellison was scheduled to appear this Sunday on "This Week" and NBC's "Meet the Press" to discuss "the future of our party."

The Minnesota Democrat will get strong support for a DNC bid from Hill Democrats, who are convinced his energy and commitment to progressive principles will help revitalize the party.

"I think after what happened with the election, the DNC needs a change — on a political level, on an inclusion level, on base organizing, different strategy, [being] more creative," said Rep. Raúl Grijalva (D-Ariz.), who co-chairs the Congressional Progressive Caucus with Ellison. "I mean, Keith is a good face for the DNC."

Grijalva added: "If you're going to put together a kind of multicultural, multi-ethnic kind of umbrella, Keith would be perfect."

The race for the DNC is shaping up to be a competitive battle. Former Vermont Gov. Howard Dean — DNC chairman from 2005-09 — is running. Former Maryland Gov. Martin O'Malley is considering a run. Labor Secretary Tom Perez, DNC Vice Chairman Raymond Buckley, South Carolina Democratic Party Chairman Jaime Harrison and former Minneapolis Mayor R.T. Rybak — another DNC vice chairman — have all been mentioned as possible candidates as well. The election for the new chairman won't come until next March.

While praising Ellison, Dean said running the DNC is a full-time job, implying that Ellison wouldn't be an effective party leader while still serving in Congress. Rep. Debbie Wasserman Schultz of Florida ran the DNC from 2011 until this summer. She was forced out by progressives following the disclosure of internal DNC emails in the WikiLeaks scandal that showed close cooperation between party officials and the Clinton campaign.

"Look, I like Keith Ellison a lot. He's a very good guy," Dean said in an MSNBC interview. "There's one problem. You cannot do this job and sit in a political office at the same time. It's not possible.”

That the Democrats need a new direction is clear following the Election Day debacle. In addition to Trump's victory over Hillary Clinton, Democrats failed to make once-promised gains in the House and Senate while losing further ground to Republicans in gubernatorial races and state legislatures. Democrats have unassailable strength on both coasts, yet are locked out of power in the South and much of the Midwest. And while the long-term demographic changes the country is undergoing clearly favor Democrats, their inability to turn that into votes or to craft a message aimed at white voters — who came out for Trump in huge numbers — remains a major problem.

Ellison, who represents the Minneapolis area, thinks he can turn that around. He is smart, eloquent and unabashedly liberal, performing well in both TV appearances and House floor debates. He's built a strong fundraising network for his own reelection campaigns. Although he serves on the Financial Services Committee, he gets little support from that industry; instead, his biggest backers come from the health care field and labor unions. Ellison also raises more than half of his donations in small amounts from supporters nationwide, a very high figure for any lawmaker.

"Rep. Ellison's philosophy is one of 'generosity and inclusiveness,'" his official bio states. "His priorities in Congress are: promoting peace, prosperity for working families, environmental sustainability, and civil and human rights."

Ellison was born in Detroit. According to his official bio, "His family’s involvement in the Civil Rights struggle between the 1950s through 1970s influenced Keith’s commitment to the cause of justice and creating an inclusive and fair society."

Ellison — the first Muslim ever elected to Congress — was raised a Catholic but converted to Islam while attending Wayne State University.

“I can’t claim that I was the most observant Catholic at the time. I had begun to really look around and ask myself about the social circumstances of the country, issues of justice, issues of change,” Ellison said during a 2011 interview. “And when I looked at my spiritual life and I looked at what might help inform positive social change, justice in society, I found Islam.”

Following college, Ellison attended law school at the University of Minnesota. After graduating, he became a community activist and ran a criminal defense practice. He's divorced with four children. 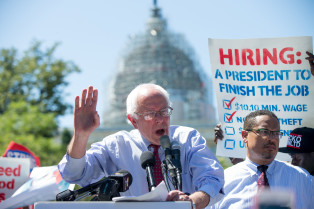 Rep. Keith Ellison stands behind Sen. Bernie Sanders during a 2015 rally for an increase in the minimum wage. | AP Photo

In the House, Ellison is an active and effective legislator, and he served on the Foreign Affairs panel before moving to Financial Services. He opposed the Iraq War and repeatedly has called for an end to U.S. military involvement in Afghanistan.

Ellison's Muslim faith has made him a target for conservative Republicans, even during his first run for office in 2006.

At that time, there were allegations that Ellison was tied to the Nation of Islam and its leader, Louis Farrakhan. Ellison said he'd never joined the group, although he had helped organize a Minnesota delegation to the 1995 Million Man March, where Farrakhan spoke. Ellison apologized for failing to "adequately scrutinize the positions" of Farrakhan and other Nation of Islam leaders. "They were and are anti-Semitic, and I should have come to that conclusion earlier than I did."

And after he was officially sworn in, Ellison used an English-translation of the Koran owned by Thomas Jefferson for his official photo, a moved that angered some Republicans.

But the Islamic State has also issued a death threat against Ellison, including him on a list of "politically active apostates."

“The fact that I’m on [ISIS'] bad side means I am fighting for things like justice, tolerance and a more inclusive world," Ellison said in an April 2016 statement.