Close But No Cigar: How America Failed to Kill Fidel Castro

From poison pills to exploding molluscs, the CIA and its allies tried everything to take out the Cuban leader 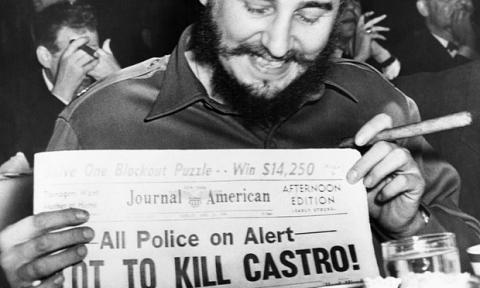 Fidel Castro holds up a newspaper headlining the discovery of a plot to kill him, during a visit to New York in April 1959., Bettmann/Corbis

From the famous exploding cigars to poison pills hidden in a cold-cream jar, the CIA and Cuban exile groups spent nearly 50 years devising ways to kill Fidel Castro. None of the plots, of course, succeeded but one of his loyal security men calculated that a total of 634 attempts, some ludicrous, some deadly serious, had been made on the life of El Comandante.

On one occasion, aware that Castro was a keen scuba-diver, the CIA devised a cunning plan. Documents released under the Clinton administration confirm that the agency invested in a large volume of Caribbean molluscs with the intention of finding a shell big enough to contain a lethal quantity of explosives. The idea was that the molluscs would be painted in vivid colours to attract the attention of an underwater Castro.

Eventually this plan was abandoned, as was another that involved preparing a custom-made diving-suit infected with a fungus that would cause a debilitating skin disease.

Fabian Escalante was head of the Cuban secret service at the height of attempts by the CIA and an increasingly desperate exile community to assassinate Castro.

The obsession on the part of the CIA and their exile allies perhaps only had a modern equivalent in the hunt for Osama bin Laden. As Wayne Smith, the former head of the US interests section in Havana, said a few years ago: “Cuba seems to have the same effect on American administrations that a full moon has on a werewolf. We may not sprout hair and howl but we behave in the same way.”

While the assassination attempts started under the presidency of Dwight Eisenhower and continued under John F Kennedy and Lyndon Johnson, there were more – 184, to be precise – during Richard Nixon’s tenure than at any other time; many attempts were without the knowledge of the administrations but planned by Cuban exiles, often with CIA assistance.

The plotting began almost immediately after the 1959 revolution. In 1961, when Cuban exiles, with the backing of the US government tried to overthrow him in the Bay of Pigs debacle, the plan was to assassinate Fidel and Raúl Castro along with Che Guevara. At times it seemed as though the US security services were more interested in bumping off the Cuban head of state than protecting their own: on the very day that Kennedy was assassinated in 1963, an agent, who had been given a pen-syringe in Paris, was dispatched on a mission to assassinate Castro.

Plots seemingly straight from a James Bond novel include that of the famous exploding cigar, which was supposedly to have been given to Castro when he visited the UN in New York. Another idea was to contaminate a cigar with botulinum toxin but it never actually reached him and he quit smoking in 1985.

One former lover was recruited as a hitwoman and given poison pills by the CIA, which she hid in her cold-cream jar. The pills melted and the woman decided that the chances of forcing them into Castro’s mouth while he slept were limited. According to her, Castro guessed her intentions and chivalrously offered her his own pistol so she could finish the job. “I can’t do it, Fidel,” she told him.

The CIA’s operations continued with tests on bacterial poisons that would be put into his tea or coffee. There were other schemes: a toxic fountain-pen, a botulin-poisoned chocolate milkshake to be served at the former Havana Hilton, and a non-fatal plan to discredit Castro by having an LSD aerosol sprayed near him while he was making a broadcast which would, supposedly, lead to national humiliation as he freaked out on air.

When Castro travelled abroad, the CIA cooperated with Cuban exiles for some of the more serious assassination attempts. As recently as 2000, when Castro was due to visit Panama, a plot was hatched to put 200lb (90kg) of high explosives under the podium where he was due to speak. Castro’s personal security team carried out their own checks before he arrived and foiled the plot.

Four men, including Luis Posada, a veteran Cuban exile and CIA operative, were jailed as a result, but they were later given a pardon and released. Posada retired to Florida, home of most of the Cuban exile community. He later faced accusations, which he denied, that he had played a part in the blowing up of a Cuban airliner in 1976 in which 78 people died.

While the CIA used their own operatives and anti-Castro Cubans, they also considered outsourcing the assassination. American underworld figures from the mafia – still smarting at being kicked out of Cuba by Castro – were approached to see whether to would carry out a hit.

One would-be sniper was caught by security men at the University of Havana. A grenade attack at a baseball game was another failed ploy.

Officially, the US eventually abandoned its attempts and instead introduced a trade embargo of the island in an effort to dislodge Castro. However, the Cuban security service remained wary of any gifts sent by foreign “well-wishers”. Doubles were used to confuse potential assassins and he moved around the country constantly. Asked once if he wore a bullet-proof vest, Castro replied: “I have a moral vest.”

His ability to survive the many efforts to eliminate him prompted many jokes. One tells of him being given a present of a Galápagos turtle. Castro politely declined the gift after he learned that the turtle was likely to live only 100 years. “That’s the problem with pets,” he said. “You get attached to them and then they die on you.”