Unions must maintain unity among the workforce split by the Carrier deal, and educate its members on why they should not have voted for Trump. Election data seems to indicate that it was union white workers more than poor white workers who supported Trump to begin with. The divide between highly skilled and paid workers and minimum wage workers harkens back to the 1920s when unions focused primarily on craft workers rather than the expanding industrial workforce. 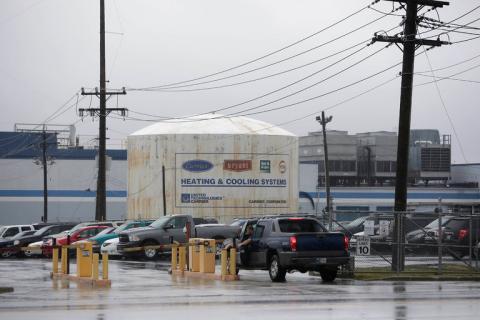 The Carrier plant in Indianapolis. The company had previously announced plans to move 2,000 factory jobs from Indiana to Mexico. Credit,Joshua Lott for The New York Times

Trump’s Carrier deal has been examined, criticized and praised. Many capitalist voices, from the Wall St. Journal to the New York Times, gave it a “thumbs down.” The shameless Chicago Tribune and Washington Post, in contrast, applauded the deal. Our local Times of NW Indiana saw it as a good sign for what’s to come.

Their criteria, of course, are based on what’s good for corporate America, certainly not what’s good for workers. Eight hundred jobs saved is in itself good news. But overall, the facts are grim for working people. Carrier will still send more jobs to Mexico than it keeps here in Indiana, about 1370. In addition the deal will require Hoosiers to cover the $7 million gift in tax relief to United Technologies, Carrier’s owner. With the promise to cut corporate taxes from 35% to 15%, Trump chose to reward rather punish corporate flight.

Trump is championing the trickle-down theory of development. Provide huge benefits to companies and wait for the benefits to trickle down to workers. Unfortunately they don’t.

There are still many unknowns. We do know that 300 of the jobs “saved” were never scheduled to leave the U.S.; so it is actually 800 jobs saved. They were administrative and research jobs, not union jobs. And what are the details? Are there any restrictions on downsizing the plant in Indy or any requirements that the union be involved in determining questions of wages, hours and working conditions? Or did Trump promise United Technologies that his NLRB appointments would take care of union problems!

Stepping back it is clear that the Carrier deal will succeed in driving an even deeper wedge between one worker and another.

That is why the United Steelworkers—in a very unenviable position—wrote: “The union looks forward to learning the details of the proposed deal.” The union praised the efforts of its members “for bringing the union’s fight to save their jobs to the attention of the nation.” That is the way USW President Leo Gerard put it. Carrier will keep some jobs from the Indianapolis plant, but they will also outsource other jobs. Imagine the workforce: “Do we go or do we stay?” Just down the road from the Indy plant in Huntington, is another Carrier plant where all 800 jobs will still be leaving for Mexico. All the workers are members of the USW, a union that has fought incredibly hard against capital flight.  Some union workers will thank Trump from the bottom of their hearts; others will denounce him and his deal.

Indiana is the red state that rarely gets talked about. We were among the first states to require IDs for voting, to re-institute “right-to-work” legislation, and to deny women virtually any access to health care in order to outlaw abortions. Indiana went strongly for Trump, including support from 50% of union workers.

If we thought two-tier was divisive, think about the outcomes of the Carrier deal! Some workers get a Christmas gift; most get coal in their stocking. Do we celebrate and grieve at the same time? Do we really want to see social programs slashed, as corporate America pays ever less taxes?

Fighting for solidarity has been a challenge in this state; Republican anti-unionism has already aggravated some existing rifts between construction, manufacturing and public service unions. On occasions, such as in the battle to stop “right-to-work,” labor divisions have hindered efforts to fight for workers’ rights overall.

In the Carrier case, the Indiana State AFL-CIO spoke strongly against the downsides of the deal. Although noting that the Federation is “cautiously optimistic,” it goes on to stress that “we are saddened to hear that 1,370 people…will lose their jobs to Mexico.” In NW Indiana, the USW district director Mike Millsap, who was a Bernie Sanders delegate, echoed our need for good-paying jobs, and attributed the saving of these jobs to the fight back of their members and also to Bernie Sanders whose efforts kept “this issue on the front burner.”

In the end unions have to dance around the deal, maintain unity among the workforce split by the deal, and still educate its members on why they should not have voted for Trump. Election data seems to indicate that it was union white workers more than poor white workers who supported Trump to begin with. The divide between highly skilled and paid workers and minimum wage workers harkens back to the 1920s when unions focused primarily on craft workers and ignored the rapidly expanding industrial workforce.

Plus what are we willing to pay in the long run for some jobs in the short run? Tax breaks, financial incentives, and deregulation will only deepen the divide between the haves and have-nots.

What Trump’s action with Carrier did was make it even harder to win back workers who voted “to make America great again.” At least for the time being.  The challenge, of course, is a campaign to change consciousness and build class identity. It won’t be easy! Carrier made it harder.

Thanks to the author for submitting this to Portside