Donald Trump Is Bullying Unions. He Picked the Wrong Fight

The president-elect slammed a Carrier union leader and then chose a fast-food executive to be labor secretary. The working-class will fight back 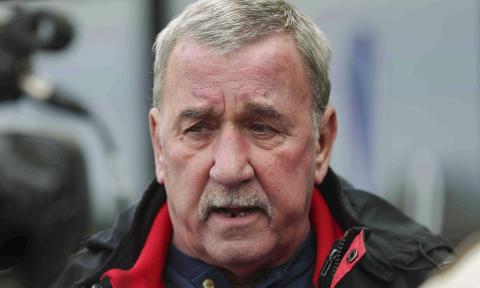 It is repulsive but not shocking that Donald Trump, the billionaire businessman and president-elect, feels free to target Chuck Jones, the United Steelworkers local president, who is nothing short of a working-class hero. In a tweet, Trump wrote Chuck Jones “has done a terrible job representing workers”. This was after the union leader criticized the Carrier job deal. But Chuck has a slingshot, namely thousands of members in Indianapolis and a resistance movement that is stirring across our nation.

As Trump was insulting Jones he was also nominating Andrew Puzder to be labor secretary. Puzder is an even clearer reminder of Trump’s direction and true colors. Puzder is affiliated with the conservative American Enterprise Institute, and his career is all about extracting profits from fast-food workers wrapped in the ideological cloak of deregulation.

The movement against Trump’s bullying is larger than United Steelworkers, and larger than labor. A national network based on mutual aid is growing and includes Muslims, immigrants, environmentalists, faith-based groups and people who expect fairness and are willing to stand up to bullies, no matter how rich or powerful.

Even before inauguration day we must say “Enough is enough!” Our rights to speak up cannot be drowned out by the new president or his rightwing billionaire allies. On Wednesday, federal contract workers walked off the job in Washington DC and assembled at Freedom Plaza, joined by immigrants and union members and demonstrating for decent pay and rights on the job.

Carrying shields labeled “Good Jobs Defenders”, they listened as Congressman Keith Ellison, Senator Bernie Sanders and other elected and national leaders pledged to build resistance based on mutual aid, not simply self-defense. The old labor battle cry “An injury to one is an injury to all” takes on new meaning.

Chuck Jones dared to call out Donald Trump for saying he would save the Carrier/United Technologies jobs, and then protecting 800 jobs out of 2,000. Chuck stated that 800 was better than none, but he was also pointing out the disappointment that faced the majority of Carrier workers in Indianapolis and so many others in his local union and beyond that face similar job cuts.

United Technologies’ revenues currently include billions in federal contracts. The profits on those contracts far exceed the cost savings of moving the Carrier furnace production to Mexico. Senator Sanders will soon introduce legislation that makes the connection between moving work outside the country and future bidding rights on government contracts. This legislation will have real teeth, including penalties for those that offshore production and then look for government contracts and tax relief for investing domestically. Most other nations have long considered economic and trade policy to be about jobs and not corporate profits.

In fairness, Trump has begun to make that connection in apparently saving 800 jobs at Carrier. But Jones and millions of union members like him will demand a real voice in these decisions, either through collective bargaining, political action or both.

Jones and Local 1999 members claim they were never consulted by Trump or Carrier/UT management. Established US labor law mandates their right to negotiate the effects of any closing. In any other global democracy, bargaining rights are much stronger and the commitment to jobs is a cornerstone of economic and trade policy.

Trump is like a Goliath of great wealth and political power. At times, he might toss gifts to the masses like a 19th-century monarch, but his strategy of attacking and dividing working families will clearly lead to net losses for them and big gains for corporate management at multinationals like UT.

Working-class unity is the ammo Chuck Jones and workers across this nation need for their sling shots. Unlike in David’s story, the rest of us can’t sit back and watch. We need to build that army of resistance and create a vision of the future based on unity not hatred. As we have learned before, when we are under attack, together we must stand up and fight back.

Larry Cohen is the board chair of Our Revolution, the successor organization to Bernie 2016, and the past president of the Communications Workers of America.