North Carolina Republicans' Legislative Coup Is an Attack on Democracy

What’s happening in North Carolina is not politics as usual. It is an extraordinarily disturbing legislative coup, a flagrant effort to maintain one-party rule by rejecting democratic norms and revoking the will of the voters. 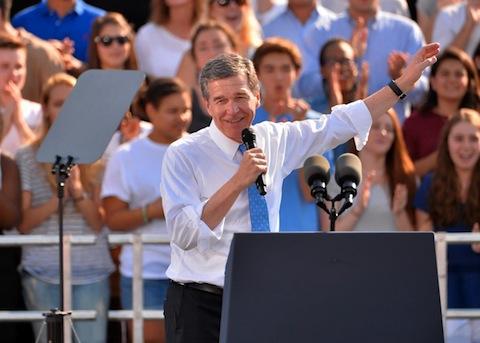 Republicans in the North Carolina General Assembly staged a shocking legislative coup on Wednesday night, calling a second special session and proposing a raft of measures designed to strip power from the newly progressive state Supreme Court and governorship. This last-minute power grab marks an alarming departure from basic democratic norms—a blatant attempt to overturn the results of an election by curtailing judicial independence and restructuring the government to seize authority lawfully delegated to the incoming Democratic governor.

The trouble in North Carolina began when Republican Gov. Pat McCrory lost his re-election bid, likely because of his support for the anti-LGBTQ law known as HB2. At the same time that voters replaced McCrory with Democrat Roy Cooper, they ousted a conservative state Supreme Court justice in favor of a progressive. That tilted the balance of power on the court to a 4–3 liberal majority, ending an era in which the court’s conservatives could rubber stamp the legislature’s voter suppression and gerrymandering.

Because of this gerrymandering, Republicans retained a supermajority in the state legislature, even while losing the governorship and Supreme Court. (A federal court ordered the legislature to redraw its maps and hold new elections, but those won’t occur until 2017.) Rumors floated around the capital that Republican legislators would either throw out the results of the gubernatorial election and reinstall McCrory by citing baseless allegations of election fraud or add two seats to the Supreme Court and let McCrory fill them, restoring Republican control. McCrory eventually conceded defeat when a partial recount could not close his 10,000 vote deficit. But concerns over court-packing grew when McCrory called a special legislative session, ostensibly to pass a disaster relief package.

That session did, indeed, result in a disaster relief bill. However, as it drew to a close on Wednesday, Republican leaders called another special session—with the explicit aim of curbing the authority of both Cooper and the court. They promptly put forth a series of dramatic alterations to the government’s structure, including proposals to:

These proposals are not merely designed to negate the will of the voters in this election. They are also intended to maintain Republican-sponsored voter suppression, thereby preventing Democrats from ever regaining control of the North Carolina government. North Carolina Republicans have long strived to prevent black citizens from voting; after the Supreme Court gutted the Voting Rights Act in 2013, they requested data on voting preferences by race, then passed an omnibus voter suppression act that, as one federal appeals court put it, seemed to “target African Americans with almost surgical precision.”

Although that court invalidated the law, Republican-controlled county election boards implemented much of it anyway, curtailing early voting and slashing the number of precincts in majority-black counties. These election boards also allowed Republicans to disenfranchise black Democrats—without their knowledge—in violation of federal law. With Cooper’s victory, Democrats were poised to take control of these election boards, thereby restoring voting rights throughout the state. The new measures will deny Democrats this right. They will also significantly delay challenges to the legality of voter suppression methods, drawing out the process for years before the state Supreme Court can hear these cases.

What’s happening in North Carolina is not politics as usual. It is an extraordinarily disturbing legislative coup, a flagrant effort to maintain one-party rule by rejecting democratic norms and revoking the will of the voters. It is the kind of thing we might expect to see in Venezuela, not a U.S. state. It should terrify every American citizen who believes in the rule of law. This is so much more than a partisan power grab. This is an attack on democracy itself.