tv Everything We Know About ‘The Handmaid’s Tale,’ Elisabeth Moss’ Upcoming Hulu Series

Whether or not you agree with Lady Gaga’s estimation that American women are “fighting for their lives” following Trump’s win, the timing of the Republican nominee’s victory and The Handmaid’s Tale‘s spring 2017 premiere seems well-timed. 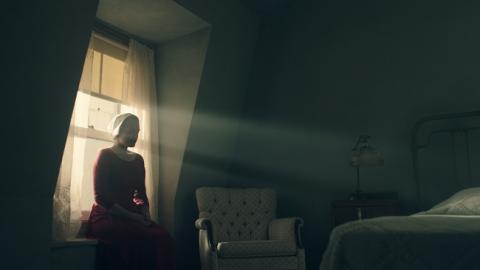 ,
Six months before an old Access Hollywood tape surfaced featuring President-elect Donald Trump and former Today co-host Billy Bush’s blatantly sexist discussion of women, Hulu announced plans for a 10-episode adaptation of Margaret Atwood’s dystopian novel The Handmaid’s Tale. Starring Mad Men alum Elisabeth Moss, the new series would reportedly stick closer to its source material a previous adaptations, a 1990 feature film starring Natasha Richardson, Faye Dunaway and Robert Duvall. That Atwood’s original story would figure so prominently may please fans of the 1985 book, but considering Trump’s infamous “grab them by the p*ssy” line, his general treatment of women, and the elevation of politicians threatening abortion rights and access to birth control, The Handmaid’s Tale couldn’t be more relevant.
What It’s About
For those of you unfamiliar with the book, Handmaid’s Tale tells the story of Offred, a member of a class of women known as “handmaids.” Their sole purpose: To help repopulate the Republican of Gilead, a theocratic dictatorship established in the wake of an uprising staged by religious extremists following a massive terrorist attack against the United States of America. The men of Gilead serve as its leaders, whereas the rights of all women have been completely erased. All that matters is repopulation and, of course, unquestioned religious servitude.
Hulu recently released the first four photos from the series, as well as a brand new synopsis that confirms the adaptation’s devotion to the source material:
Facing environmental disasters and a plunging birthrate, Gilead is ruled by a twisted fundamentalist regime that treats women as property of the state. As one of the few remaining fertile women, Offred (Elisabeth Moss) is a Handmaid in the Commander’s household, one of the caste of women forced into sexual servitude as a last desperate attempt to repopulate a devastated world. In this terrifying society where one wrong word could end her life, Offred navigates between Commanders, their cruel Wives, domestic Marthas, and her fellow Handmaids — where anyone could be a spy for Gilead – all with one goal: to survive and find the daughter that was taken from her.
Along with Moss’ portrayal of Offred, The Handmaid’s Tale features Joseph Fiennes as her assigned commander and Yvonne Strahovski as his wife. Readers will also recognize the character Nick, played by The Mindy Project‘s Max Minghella, as one of the book’s more prominent supporting characters with whom Offred associates — publicly and otherwise — in order to find her daughter and escape Gilead alive.
What It Will Look Like
Aside from a 10-second clip Hulu released back in October, little was known about how much the look of The Handmaid’s Tale would reflect or differ from Atwood’s novel.
Yet the handmaids depicted in the short preview wore red, just as the Atwood described in her novel and as book cover artists often imagined it. This suggested that the series aspired to capture the dark and dreary world Atwood imagined, and with the four new photos (above and below) just released by Hulu, it seems that’s precisely what has happened.
From a scene depicting what looks like Fiennes’ Commander preparing to take part in “the ceremony”:
To a gathering of the handmaids under the watchful eye of the heavily-armed police:
And a rather distressed Offred, in what may or may not be a flashback:
Why It Matters Now
Whether or not you agree with Lady Gaga’s estimation that American women are “fighting for their lives” following Trump’s win, the timing of the Republican nominee’s victory and The Handmaid’s Tale‘s spring 2017 premiere seems well-timed. Besides, as Moss told Entertainment Weekly in a recent interview, she and her fellow cast and crew members “never wanted the show to be this relevant.” Its original focus was more on what creator Bruce Miller (The 100, Eureka) dubbed Atwood’s “unbelievably rich world and story.”
Then again, Texas just passed legislation requiring women who obtain an abortion to bury or cremate the remains of their fetuses. Vice President-elect Mike Pence oversaw the passage of a similar law in his native Indiana (and is a well-known opponent of Planned Parenthood and similar organizations). So the current political climate for women makes Handmaid’s Tale more relevant than either Moss or Miller ever could have imagined. In other words, a lot of people are going to be watching and talking about this show in four months’ time.
The first episode of The Handmaid’s Tale will stream sometime in April 2017. The rest will follow on a weekly basis.