The day after the Army handed down its decision on the Dakota Access Pipeline, it announced a public hearing on water permits for another controversial Energy Transfer Partners project: the Bayou Bridge Pipeline, which would cut through the ecologically important Atchafalaya Basin wetlands in south central Louisiana. The hearing will take place in Baton Rouge on Jan. 12. 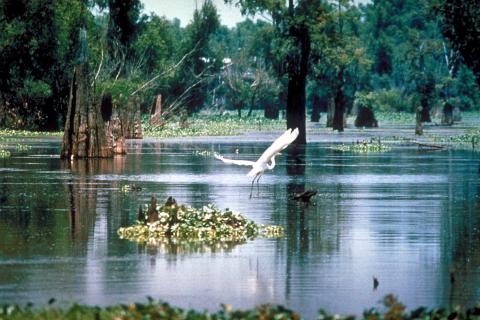 Energy Transfer Partners, the Dallas-based company behind the Dakota Access Pipeline, suffered a setback this week when the Army Corps of Engineers denied permission for the controversial $3.7 billion project to cross under a lake on the Missouri River a half-mile from the Standing Rock Sioux Reservation, where a protest camp has drawn thousands of self-described "water protectors" from around the world, including hundreds of U.S. military veterans.

Announcing the decision on Sunday, the Army said alternative routes should be explored. That would mean environmental reviews that could delay construction for months or even years. Hours later, Energy Transfer Partners released a statement that decried the decision and struck a defiant tone:

The White House's directive today to the Corps for further delay is just the latest in a series of overt and transparent political actions by an administration which has abandoned the rule of law in favor of currying favor with a narrow and extreme political constituency.

As stated all along, ETP and [partner Sunoco Logistics] are fully committed to ensuring that this vital project is brought to completion and fully expect to complete construction of the pipeline without any additional rerouting in and around Lake Oahe. Nothing this Administration has done today changes that in any way.

Indeed, Energy Transfer Partners appears to have a powerful ally in Republican President-elect Donald Trump. Days before the Army announced it was blocking the proposed Dakota Access route, Trump said for the first time that he supports the pipeline's completion.

There have been questions about whether Trump has a financial conflict of interest regarding the pipeline, since disclosure forms filed by him earlier this year showed he owned between $15,000 and $50,000 in Energy Transfer Partners stock, down from between $500,000 and $1 million a year earlier. But last month, a spokesperson for Trump said he sold his shares in the company over the summer.

A communications briefing from Trump's transition team said his backing of the pipeline "has nothing to do with his personal investments and everything to do with promoting policies that benefit all Americans," Reuters reports.

Though the Trump campaign has called for "unleash[ing] America's $50 trillion in untapped shale, oil, and natural gas reserves," the industry's contributions in this year's presidential race actually favored Clinton. But Kelcy Warren, Energy Transfer's founder and CEO, put his money on the Republican, contributing at least $100,000 this year to helping elect Trump.

Warren has said he's "100 percent" confident Trump will help see the project through.

The day after the Army handed down its decision on the Dakota Access Pipeline, it announced a public hearing on water permits for another controversial Energy Transfer Partners project: the Bayou Bridge Pipeline, which would cut through the ecologically important Atchafalaya Basin wetlands in south central Louisiana. The hearing will take place in Baton Rouge on Jan. 12.

Along the way, the 162-mile-long, 24-inch diameter pipeline would cross eight Louisiana watersheds including the Atchafalaya Basin, where the river of the same name converges with the Gulf of Mexico. It's an ecologically important area as Louisiana's only growing delta, and it contains the largest river swamp and largest contiguous bottomland hardwood forest in North America. It's also home to nine federal- and state-listed endangered or threatened wildlife species and six endangered or threatened bird species.

The Atchafalaya Basin already faces threats from Louisiana's oil and gas industry, among them oil waste pollution and canal dredging that's causing water quality problems. Those issues would be compounded by pipeline spills and other accidents, which are not rare events. A recent CityLab analysis found more than 9,000 significant pipeline-related incidents have occurred nationwide over the past 20 30 years, resulting in 548 deaths, 2,576 injuries, and over $8.5 billion in financial damages. Meanwhile, an ongoing effort to catalog oil and gas industry incidents in Louisiana documented six pipeline accidents in that state alone over a two-week period.

While the media spotlight has focused on protests against the Dakota Access Pipeline, opposition to the proposed Bayou Bridge Pipeline has been growing, as The Daily Advertiser reports:

Environmental groups, some landowners and concerned citizens are quietly building resistance to the Bayou Bridge Pipeline project, gathering thousands of signatures from as far away as New Zealand and South Africa, forcing the U.S. Army Corps of Engineers to call for a public hearing where they plan to demand a thorough environmental impact assessment of the project.

The Atchafalaya Basinkeeper program, part of the Waterkeeper Alliance, collected almost 75,000 signatures on a petition calling on the Corps to hold public hearings and prepare an environmental impact statement for the project. The environmental advocacy groups Bold Louisiana and Gulf Restoration Network are also petitioning for a thorough environmental assessment and calling on Energy Transfer to consider alternative routes.

"These wetlands are South Louisiana's buffer to life-stealing hurricanes and our sponge that keeps devastating floods, like we have recently experienced, at bay," said Cherri Foytlin, a leader of Bold Louisiana and a Native American who spent time at the North Dakota protest camp. "On behalf of future generations, in solidarity with Standing Rock, and in protection of our land and waters, we cannot allow the Bayou Bridge Pipeline to be built."