labor Beyond Optics, Towards Politics: A Report Back From CLC Convention

Thanks to grassroots organizing, the CLC, for the first time, took a clear position of solidarity with a Palestinian-led human rights campaign. The convention also showed progress on Indigenous rights, racism, queer or trans rights, mental health, and environmental justice. The potential of that progress, however, is limited by a "business-as-usual" approach by too many union leaders. What matters now is how union members act on the progress made. 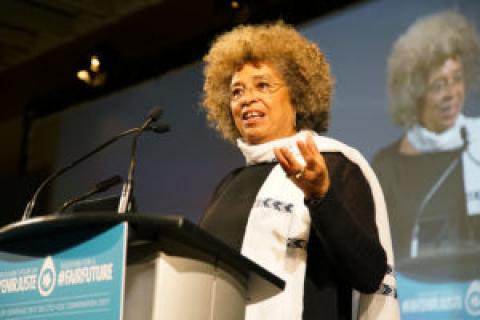 At its best, the recent 28th Constitutional Convention of the Canadian Labour Congress demonstrated how far unions have come on Indigenous rights, Palestinian rights (more on that later), racism, queer or trans rights, mental health, and environmental justice. Delegates made passionate appeals to support these and other important struggles.

At its worst, the 28th CLC Convention also illustrated the limited thinking that exists in union circles, particularly at the leadership level. Election leaflets festooned the halls making few, if any, specific promises.

A 5 per cent pay increase (indexed to inflation) was approved for CLC leaders who currently earn over three times the average wage in Canada, despite stiff opposition from convention delegates. UNIFOR (the largest private sector union) and Local 113 of the Amalgamated Transit Union continued their public feud after an attempted raid by UNIFOR failed earlier this year. Premier Rachel Notley arrived to celebrate achievements made by the NDP government in Alberta, but ended with a pitch for export-driven oil pipelines, the impact of which would undermine current efforts in Canada to meet global climate change targets.

At a time when organized labour faces existential challenges, these optics at union conventions leave many cold. Before going to the 28th CLC Convention, I canvassed my Facebook contacts to see who else was attending, and this reply earned the most praise: “I’ll be raking leaves in my yard during CLC Convention, which is likely to add more to the class struggle.” Ouch.

While such cynicism is understandable, I’ll offer another perspective here. Yes, union conventions are spaces where top-down strategies get used for particular outcomes, but they are also moments where activists can shift beyond optics to politics. With the right strategy, activists can organize, appeal for support, and advance important work. Two examples from the 28th CLC Convention help illustrate this point.

The first was an emergency resolution urging the CLC to support a hunger strike of 1500 Palestinian prisoners in Israel that started on April 17, 2017. At the CLC Convention, this resolution was promoted by a network of delegates and earned 15 endorsements, including the CLC’s Canadian Council (a decision-making body that meets daily at the CLC Convention, and four times a year). When the resolution hit convention floor, it was attacked by some as anti-semitism, and an unfair targeting of Israel. But after a spirited debate, the resolution passed. CLC President Hassan Yussuff’s ruling on this outcome was challenged from the floor, but the challenge was defeated.

Thanks to grassroots organizing, the CLC took a clear position on a Palestinian-led human rights campaign for the first time in its history. It also joined the International Trade Union Confederation (representing 176 million workers worldwide) and other unions to send a clear message to Israel, and the corporations involved in Israel’s prison system.

In a related effort, union activists inspired by the Leap Manifesto organized a forum over lunch after Premier Notley addressed CLC Convention. Their intent was to discuss ideas that ensured no worker was left behind by climate change, and to seek alliances with energy workers in doing so. People wanted specific proposals for green jobs (beyond general concepts like “just transition”), and were concerned Premier Notley’s push for pipelines might divide union activists concerned about the climate crisis.

The Leap forum drew fifty participants, many of whom intervened later during the convention’s panel on green jobs. In that debate, Ken Smith (President of UNIFOR Local 707A, representing 6000 energy workers in Fort McMurray) declared he was “undecided” on pipelines, but was convinced “there are no jobs on a dead planet.” Carolyn Egan, President of the Steelworker Toronto Area Council, said “transition [to a new energy economy] is inevitable, but justice is not”.

Kim Fry, an elementary teacher activist in Ontario, declared it was time for unions to fight for a new energy future, and that starts by rejecting the expansion of fossil fuel infrastructure.

Interestingly enough, Fry ran into Premier Notley later that afternoon, and wrote about their conversation on Facebook:

"I just bumped into Rachel Notley while taking Neko back to childcare.  Was debating saying something to her, but when she commented on what a beautiful baby he was I just had to say that he is and I love him and that is why I will do everything in my power to stop the pipelines that she was so happy about in her speech to us at the CLC convention.

This exchange demonstrates the importance of grassroots unionism, and how it can impact larger forces. When Premier Notley spoke at the Federal NDP Convention last year in Edmonton, her pipeline pitch earned a standing ovation. At the CLC Convention last week, it drew tepid applause.

Why? The work of climate justice campaigners is a major factor, along with the continued evidence of climate change. The climate drivers behind recent floods in Ontario and Quebec were on peoples’ minds, as were the deplorable conditions in many Indigenous communities impacted by fossil fuels projects. Delegates at the CLC Convention entered that context with grassroots organizing, and this contributed to a shift in opinions of Premier Notley’s plans for Alberta. Notley is nowpublicly campaigning to ensure the BC government doesn’t become a pipeline opponent.

All of which is to say: union conventions matter, and how they are utilized by activists and movements matters. The unions our grandmothers and grandfathers built must not be left to those concerned only with optics, however sincere their intentions may be. Our unions need better politics, and activists prepared to fight for them.