The Carolina Coup and the Fight for Public Education

The lesson for Democrats from the Republican coup in North Carolina is that public education is a cornerstone of our democracy, and closely related to the fight for voting rights, racial justice, and a more equal society. 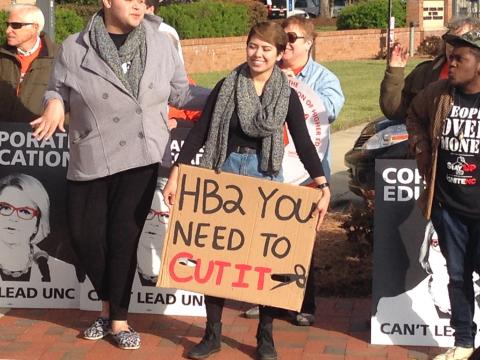 The nation's eyes are on my home state of North Carolina, where what many are calling acoup has shown the lengths to which Republicans will go to protect and expand their political power.

The naked power grab by Republicans has shocked the nation. But few people really understand that a struggle over public education is at the center of the fight against an authoritarian government in the era of Donald Trump.

What did Republicans do? In a nutshell, according to a review of the carnage by David Graham for The Atlantic, "Having lost the governor’s seat in November’s election, the GOP legislature opted to simply reduce the governor’s power drastically. The two most prominent bills involve the elections system and the governor’s right to make appointments."

Specifically, on the elections front, Republicans robbed incoming Democratic Governor Roy Cooper of his ability to change the composition of state and county boards of elections, diluted the governor's appointment authority, and rigged the timing of county board leadership to favor Republicans.

Republican lawmakers took away the incoming governor’s ability to make appointments to the State Board of Education and the boards of trustees of University of North Carolina system, made cabinet appointees subject to approval by the senate, and cut the number of appointments the governor can make for government jobs from 1,500 to 425.

The attack on the incoming governor's power over education appointments is especially radical, as it transfers power from the state board to the new state superintendent of public instruction, Republican Mark Johnson, who defeated the Democratic incumbent, June Atkinson, in November.

Why go after education offices?

In North Carolina, public education has always been an issue inextricably intertwined with voting rights and democracy. To learn more about this I talked with historian Timothy Tyson at one of his favorite haunts in downtown Durham, a combination coffee shop, casual eatery, and general store with rough-hewn pine floors and timbered ceilings. Tyson, a university professor and author of an acclaimed book on racial turmoil in his childhood home of Oxford, NC, is an expert on issues of culture and race in the South. Tyson also serves as the Education Director of the North Carolina NAACP.

Since 2007, Tyson has been a prominent part of the protest movement, most commonly referred to as the Moral Monday Movement, that has led numerous mass demonstrations and other actions to oppose rightwing extremism in his state and elsewhere.

"Education fits into the Moral Monday Movement," Tyson explains, "because political culture in North Carolina centers on it." Based on the history of the state and the South in general, he argues, education is front and center for any political argument addressing voting rights and democracy.

In Tyson's account, conservative North Carolinians have always attacked public education as a means of waging political warfare. In the post-Civil War years, white conservatives were generally opposed to public schools. They regarded education as belonging to the privileged class who could afford to pay for it.

Under Reconstruction, however, the state's Constitution was rewritten in 1868 to include, among many other provisions, the state's obligation to provide a sound, basic, and free education to every citizen. Black North Carolinians had won full citizenship, and the state was obligated to educate them, along with the children of many poor, white farmers and laborers.

When black citizens achieved voting rights, conservative whites also faced the prospect of black voters joining forces with white progressives to form an imposing voting bloc. As the power of this new coalition expanded – into what Tyson calls a "fusion movement" – its influence in the legislature expanded, too, and by the late 1800s, the fusion movement had succeeded in substantially increasing state spending on public education.

As the turn of the last century neared, however, a growing “white supremacy campaign” grew in power until it wrested state government away from the progressive coalition in 1900 and installed two measures to strip the vote from black North Carolinians.

First, white conservatives imposed a “grandfather clause,” which exempted all voters whose grandfathers had not been eligible to vote—a de facto way to exclude the children of slaves. Conservatives also enacted literacy tests as a means of blocking under-educated blacks from voting. The tests posed a problem, however, when it became apparent many poor white farmers and laborers, who were under-educated, too, couldn't pass them.

To address that problem, Governor Charles Aycock, who became known as North Carolina's first "education governor," created a well-funded, mass effort to vastly improve the state's public school system and to raise the education of white voters so they could pass the state’s literacy tests.

Ever since the Aycock administration, Tyson tells me, every North Carolina governor has wanted to wear the mantle of "education governor."

Aycock scaled up the number of schools for black children, too. But those schools remained a separate and unequal system. Black students received a third of what was allocated to educate whites.

This separate and unequal system of public education, enacted largely to keep political power in the hands of white conservatives, is what built the social order of segregation, which prevailed until the Civil Rights Movement toppled it in the 1960s.

"Education is foundational to North Carolina's sense of itself as a progressive southern state," Tyson insists.

Today, Republicans are making education part of their Carolina coup and enacting new ways to limit the control Democrats have over public schools.

What doesn't make sense is that many Democrats – in the South and elsewhere –  don't defend public schools very forcefully, even as they stand up for voting rights and democratic principles.

Indeed, the trend for nearly thirty years has been that Democrats compromise with Republicans on education—by accepting privatization efforts like vouchers and charter schools, for example, by agreeing to sustain inadequate funding levels, and by stifling the voices of classroom teachers and their unions.

The lesson for Democrats from the Republican Carolina coup is that public education is a cornerstone of our democracy, and closely related to the fight for voting rights, racial justice, and a more equal society. Democrats must resurrect the conviction of their fusion heritage to fight for free, accessible, and high-quality public schools for all children.