I grew up going to a Korean church in Germany, learning all about kindness, sharing, and helping each other in a wonderfully warm, communal, and nourishing space. That really had a positive impact on me (in addition to my socialist parents!). 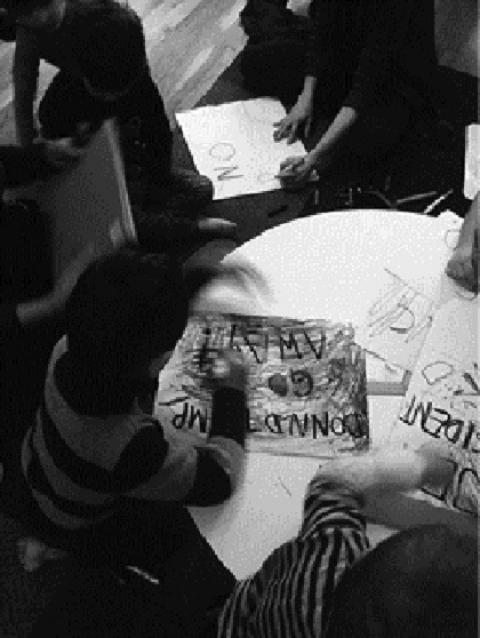 Members of the Socialist Sunday School prepare for an anti-Trump rally,

Too often, when DSA members have children, they drop out of activities because the locals do not have meetings at convenient times for parents or are not consistent in providing child care. In addition, members would like to provide places for their children to learn socialist values and to meet other young people whose parents share those values. Socialist groups and parties in other countries have strong programs for young people, and in the past, U.S. groups did, too. Maxine Phillips talked to NYC DSA member Hae-Lin Choi about Choi’s experience in starting a young people’s program in Brooklyn.—Ed.

MP: What gave you the idea for a socialist Sunday school?

HC: I grew up going to a Korean church in Germany, learning all about kindness, sharing, and helping each other in a wonderfully warm, communal, and nourishing space. That really had a positive impact on me (in addition to my socialist parents!). But now that I am not religious anymore, I wondered where I could find that kind of community and value-infused learning for my kids, who are four and three.

When I joined DSA earlier this year, I realized that DSA would be a perfect place to jump-start something like a socialist Sunday school (SSS).

MP: How did you find other parents and why did you choose the time you did? Are all the parents DSA members?

HC: I reached out to a few like-minded families, we scheduled a planning meeting with about ten families, and we came up with an organizing structure and an outline for the classes. We were lucky to find a cheap space to rent for our meetings. We started an email list and set up a Facebook group. We decided not to make a membership with DSA a requirement but an option.

We decided to have SSS every other Sunday from 10 a.m.-12 noon and came up with the following structure: from 10-10:30 a.m., families arrive; class is from 10:30-11:30 a.m. for the young people; from 11:30-noon, we share snacks and clean up. Most of the kids still take afternoon naps, and Saturdays are filled with other activities. We understand that Sunday morning scheduling is a barrier to families who attend religious services, but for the moment, this is the best we can do.

This is the outline we came up with for the class:

1. Start with a brief meditation to calm everybody down
2. Hello and introductions
3. Sing a movement song like “Union Maid,” “Solidarity Forever,” etc.
4. Read a book about a specific topic, followed by discussion
5. Do an art activity connected to the book
6. Learn a new song
7. Recap, thank yous and snacks and clean up.

Because most kids were ages two to six, we wanted to keep the structure simple and engaging. We picked a few topics for the upcoming sessions, such as Strike, Saving the Environment, Peace, Diversity and (Self-) Acceptance, and Activism and had parents volunteer as class teachers.

MP: What are some of the books you’ve used and how has SSS developed?

HC: Over the next couple of meetings, we had an average of 10-15 children per session and we began to develop a sense of community. We had great conversations with the kids about why corporate greed is bad for the environment (reading The Lorax outside in the park), about why it’s important to organize and fight against unfairness (¡Sí, Se Puede! Yes, We Can! Janitor Strike in L.A.), or about what they like about each other and themselves. Several parents told me that SSS really resonated with their kids and led to discussions at home.

After two successful meetings, we decided to have a guided discussion among parents. Up until then, we’d just had general political discussion, mostly about the presidential election. It was the summer, when in a matter of a few days three black men, Delrawn Small, Alton Sterling, and Philando Castile were shot by the police, and we were at a loss about how to talk to our kids about this. We had a good discussion, shared resources, and also agreed to try to make SSS more diverse.

We took a break in August, and in September we struggled to pick things up again when folks were dealing with the start of school. A few of us met in October to discuss how to move forward, but then two subsequent meetings did not get organized, and I started to think that maybe SSS had failed.

Then, Donald Trump was elected president, and I realized that it was even more important to talk to our kids about love and kindness, about the importance of activism, about respect, support, and solidarity. And I also felt a desperate need for community. I invited all the parents for a meeting to be together and make signs with the kids for upcoming anti-Trump protests. Ten families responded, and eight families came. We made signs and did our first SSS field trip to the Make the Road New York anti-Trump rally.

MP: What advice do you have for others who want to provide such a program?

HC: A few things I learned: Keep it simple, no need to figure out a “curriculum” or have various committees. Parents are busy and have a hard time committing to regular activities. Weekends are a heavily contested time slot. Whoever shows up, shows up and someone is always able to read a book and draw pictures with the kids. Start with meeting in people’s homes before committing to rent a space. Although we have a few teachers in our group, no one had ever taught a socialist Sunday school, so we are all figuring this out together.

The community we are creating is wonderful and powerful and the fact that we are consciously raising the next generation of activists along the way is more important than ever.

Maxine Phillips is the editor of Democratic Left

Hae-Lin Choi is a campaign director at the Communications Workers of America and a member of the DSA NYC labor branch and the racial justice committee of DSA.

For a list of material used in the socialist Sunday school, go to http://socialistsundayschool.tumblr.com/resources