Living, or Reliving, the African-American Experience

This museum tells a story. African Americans overcame centuries of oppression to record achievements in all walks of life, including the election of one of their community as president. But To preserve the gains celebrated in the museum’s galleries, it will be necessary to continue to draw inspiration from the displays on the resistance to institutional racism. 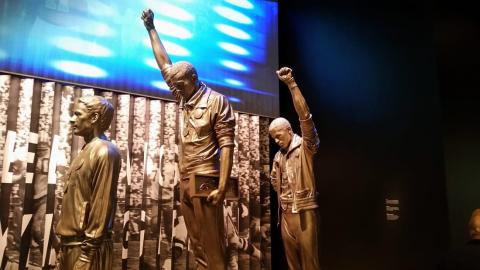 John Carlos and Tommie Smith protest on the podium at the 1968 Olympics. , Bill Mosley

The NMAAHC is the long-in-the-works monument to the experience of persons of African descent in the United States, from the earliest days of slavery and indentured servitude through the election of Barack Obama as president. In the manner of many museums created in recent decades, it sees its mission not as merely displaying artifacts – although it has no shortage of them – but telling a story from beginning to end.

For those who have at least a passing acquaintance with African American history and culture, the museum offers no startling facts, no shocking revelations. We all know of the horrors of slavery, the violence of the Jim Crow era, the courage and struggle that sustained the civil rights movement, the accomplishments of African American in literature, sports, politics, the arts and many other walks of life. What the NMAAHC offers is at least as much a cathartic experience as an intellectual or educational one, an intense immersion in what it has meant to be black in American over some six centuries.

As recommended, I started in the history galleries in the museum’s lower level. I was familiar with the origins of the slave trade in the early 16th century, but seeing shackles taken from the sunken slave ship São Jose made it uncomfortably real. A bullwhip displayed along with a poster of a slave being flayed brought home the brutality of slavery as no textbook could.

After exhibits on the brief euphoria brought about by emancipation in 1865, the resurgence of white supremacy is illustrated by a Klansman’s hood and a magazine bearing the image of four black men, their necks in nooses, dangling from a tree. As the story shifts to the civil rights years beginning in the 1950s, the stream of text and artifacts is broken at an exhibit on the 1960 segregation protest at the lunch counter of the Greensboro, NC, Woolworth, where the museum offers a “virtual lunch counter” at which visitors using touchscreens can put themselves in the shoes of the demonstrators and decide what they would have done in that situation. (The museum displays one of the stools from the real lunch counter, while at the nearly National Museum of American History one can see a section of the counter itself and four stools). Among the final images in the history galleries are of Barack Obama in the White House, bringing that phase of the story to its happy ending.

But the journey isn’t over yet. One then can take the escalator or elevator to the “Cultural Galleries” on the upper level. Here one encounters an explosion of African American achievements in music, the visual arts and drama in a single large space, where sights and sounds buffet the visitor from every direction. Within a few steps one can see Chuck Berry’s Coupe de Ville, the P-Funk Mothership, a still photo of Cicely Tyson and Maya Angelou in Roots, paintings of Jacob Lawrence, and a film of James Brown in performance. A similar treat for the senses are the “Community Galleries” which highlight African American achievements in such fields as science, sports, business, medicine and the military – the sports galleries themselves could stand as an African American athletic hall of fame. The next floor down features a variety of kid-friendly interactive displays in which visitors can practice dance steps or, on a more serious note, experience what it was like for African Americans to take car trips through the Deep South during the Jim Crow era.

The NMAAHC is a museum best visited in several trips, possibly a first one to get an overview of the place, and subsequent visits to focus on favorite galleries or exhibits. It is welcoming, open space, inviting visitors to linger over exhibits and wander the galleries at leisure. The taking of photos is encouraged, except in one room where it is prohibited – the space containing the coffin of Emmett Till, the teenager who was brutally lynched in Mississippi in 1955.

As a white visitor, I could not help but notice the visceral reaction of many African Americans to the exhibits. The emotion on visitors’ faces, the tendency to linger before artifacts, the spirit of community that permeated the museum showed that for many this was not a place of dead history but real, lived experience. More than a few visitors were old enough to remember the days of legal segregation, and even more had certainly heard of earlier deprivations from their parents and grandparents. For them, this was not a textbook; this was life, a story of hardships overcome and victories too hard-won to ever go back.

This museum tells a story, and as such the story has an ending. African Americans overcame centuries of oppression to record achievements in all walks of life, including the highest achievement of all – the election of one of their community as president. But history keeps getting written, and the ending of this narrative at roughly 2008 omits much. It was during the Obama years, after all, that police violence against African Americans rose to the forefront of the nation’s consciousness. The election of Obama’s successor – a man who openly exploited racial fears in his campaign and inspired the recrudescence of a racist, nativist right wing – also would indicate that this happy ending might not stay so happy.

To preserve the gains celebrated in the museum’s galleries, it might be necessary to continue to draw inspiration from the displays on the resistance to institutional racism represented by the Greensboro sit-in, Martin Luther King Jr.’s “I Have a Dream” speech, the courageous activism of Harriet Tubman, Frederick Douglass and Fannie Lou Hamer. The museum displays a quote by African American Studies professor Naomi Murakawa that sums up the incompleteness of the victory: “If the problem of the twentieth century was, in W.E.B. DuBois’s famous words, ‘the problem of the color line,’ then the problem of the twenty-first century is the problem of colorblindness, the refusal to acknowledge the causes and consequences of enduring racial stratification.” Despite the real progress made in racial justice as seen in the museum’s exhibits, we have not yet reached the post-racial utopia, if we ever will. But the NMAAHC reminds us how we got this far, and suggests how we might go further.