Almost every single province in Canada is ruled by a government committed to deep austerity cuts and assaults on workers rights. The tasks seem large, but as with various local labour battles, campaigns like the Fight for $15, and organizations like Iron & Earth, workers are constantly being pulled together in common struggles against common enemies. 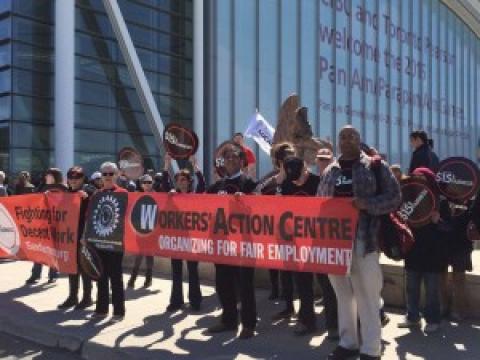 It’s been a year of bruising battles and bully governments for Canadian workers. But despite all this, there have always been glimpses of what’s possible when workers organize and fight.

During the October 2015 federal election, millions of Canadians jumped at the chance to get rid of Harper, betting on the Liberals when the NDP showed up with a lacklustre set of policies and Mulcair’s conservatism.

The election of the Liberals proved disorienting for sections of organized labour. Some labour leaders tried to cozy up to the Liberals when they reversed some of the worst Tory legislation, such as Bill C-377 and C-525. The Liberals also didn’t interfere too negatively in Canada Post negotiations with back-to-work legislation as previous Tory and Liberal governments have, but they didn’t turf the Harper-appointed executives hell-bent on a confrontation with postal workers.

But with no serious parliamentary opposition, the Trudeau Liberals have rapidly turned to the right at a pace that would make Chretien and Martin proud.

Even though the Liberals were always in favour of the corporate TransPacific Partnership and rights-busting C-51, they’ve managed to alienate many people by doubling down on Harper’s economic strategy of pipeline construction, cowardly abandoning electoral reform, postponing Indigenous education promises, and telling police to crack down on marijuana users after promising legalization. They’ve proven completely hopeless in resolving the months-long Phoenix pay system.

They’ve allowed the Harperite wrecking crew running Canada Post to call the shots while selecting a Canada Post review panel of corporate hacks to give the Harperites cover. After 30 years of budget cuts resulting in embarrassingly poor levels of public infrastructure, especially in urban and regional public transit, Trudeau’s Bay Street Finance Minister Bill Morneau has responded by developing a privatized infrastructure bank promises to be a massive corporate slush fund. Morneau is also trying to impose major federal worker pension rollbacks that Harper couldn’t even get away with.

The Trudeau Liberals have also continued with Harper’s cuts in healthcare funding transfers to the provinces. Provincial governments may be up in arms about this, but with the exception of Alberta, they are pushing forward with a wider union-bashing austerity agenda.

The new environmental struggles erupting against pipelines and fossil fuel construction are not going away. Indigenous communities, young people and environmentalists are building large-scale public support. The big pipeline confrontation at Standing Rock south of the border saw too many unions come out against the massive blockade. Not surprisingly, the oil patch downturn and the mass layoffs of union and non-union workers has caused the battle over climate change to heat up within labour’s ranks. Unions representing workers in the oil patch lined up against the Leap Manifesto during the NDP convention in Edmonton in April.

Despite this, some workers have created Iron & Earth, a new workers’ organization focusing on retraining oil patch workers for green industries which also continue to grow at a good clip. Iron & Earth is doing what needs to be done:bringing some of the big ideas about a green transition down to earth in a way that is going to help workers, not throw them out of work.
This sort of organizing is how workers can lay the foundations for a new labour movement that is pushing a real green transition strategy which will produce mass employment in renewable energy manufacturing, comprehensive housing retrofits, and green urban and regional transit systems.

The ongoing strikes against the Chronicle-Herald in Halifax and Essex County Library Board, and the long Covered Bridge Chips first contract strike in Hartland, New Brunswick, are good examples of where sustained strike support has kept up spirits, supplied strikers with financial and other material support, and demonstrated that workers are not willing to be steamrolled for corporate greed or political arrogance.
Boycotts against Covered Bridge Chips and the Chronicle-Herald have definitely had some economic impact on employers, drawn together local labour communities, and raised the profile of these struggles far beyond provincial borders. Picket support and boycott actions in local battles remain a big part of rebuilding a workers’ movement that can throw its weight.

From Covered Bridge, to Hematite Manfacturing in Guelph to the Seven Oaks hotel in Regina, scabbing has also remained a major problem that requires a well-organized response. At Hematite, early morning pickets coordinated by the local labour council helped turned back scabs in what turned out to be a short strike. Employer anti-union organizing before the strikes at Covered Bridge and Seven Oaks contributed to significant scabbing by people inside the union local, dragging out the disputes. In the case of Seven Oaks, leading to the decertification of the union afterwards.
Not surprisingly the federal Liberals and Tories sunk yet another federal effort at anti-scab legislation. Rather than placing all our chips on anti-scab legislation, fortifying picket lines against scabbing and taking necessary measures to turn them back is the best message to send to employers and their representatives in government.

With racists getting a spring in their step with the election of Trump, and stoked here in Canada by Tories like Kellie Leitch, efforts at breaking down racism within labour have to continue. The treatment of migrant workers isn’t just a question of employer conduct, but how unions deal with migrant workers. Employers and governments are most interested in exploiting migrant workers for immediate profit, but also as a general weapon against existing wage rates, benefits and conditions.

The Harvesting Freedom caravan across Ontario this year highlighted all these issues, from the basic economic “bread and butter” issues, to the injustice of the labour laws, to the racism surrounding migrant worker programs and the problems with many of organized labour’s stated positions.
While the Trudeau government has been sending mixed signals on the Temporary Foreign Worker program, the task remains for unions to abide the principles of equality for all workers, anti-racism, and “good enough to work, good enough to stay.” These principles need to be at the forefront of efforts to organize migrant and farm workers, change legislation, improve union contracts, and battle racism inside and outside the workplace.

In April 2016, coordinated Fight for $15 and Fairness actions across Ontario demonstrated the growing scope of the provincial movement. Over the past 20 years successive Tory and Liberals governments have low-waged the province through repealing workers’ rights and holding down the minimum wage for a majority of the past 20 years. And so, the Fight for $15 and Fairness has struck a chord, with chapters emerging in numerous towns and cities and campuses. Even the Ontario NDP has adopted a $15 minimum wage commitment after rejecting even a $14 minimum wage demand from an earlier version of the movement before the 2014 election.

Ontario’s growing Fight for $15 movement will have to navigate the Basic Income pilot program being tested by the Liberals as their answer to the poverty they’ve helped produce. There is plenty of confusion inside and outside the unions. Many people are attracted to a Basic Income, but the proposals so far involve very low amounts of money, and pose a real danger to social services as a neoliberal trojan horse. If a variety of services and programs are deemed inessential after a Basic Income is introduced, mass public sector layoffs and privatization of sources may be the next step. Some labour and anti-poverty activists who support a Basic Income point towards the political possibilities of people not struggling for work.

However, unlike Basic Income advanced by the privitizing austerity Liberals, Fight for $15 is actually building local networks of union and non-union low-wage workers. How the Fight for $15 navigates the 2018 Ontario election and what it does next remains an open question.

The task of taking on the right and turning back neoliberalism is immense but something that has to be done.
Almost every single province is ruled by a government committed to deep austerity cuts and assaults on workers rights.McNeil is waging a war on teachers in Nova Scotia just like Liberal governments have done in recent years against BC, Ontario and Quebec teachers In Manitoba, Saskatchewan, New Brunswick and Newfoundland & Labrador, are all carrying out or preparing attacks on public sector workers. The big spring protests in Newfoundland & Labrador point in the direction of what needs to be done the moment such attacks are rolled out.

With growing public pressure for a green transition, governments are unwilling to raise taxes on the wealthy and borrow at historically low interest rates. Instead, they are looking at more user fee flat taxes and selling off public assets for cashgrabs, as Ontario’s Liberals have just done with Hydro, which has only contributed to skyrocketing hydro rates. Now the federal Liberals are looking at selling off airports. We see where that goes with the shutdown of the Port of Churchill, a consequence of not only its privatization under the Chretien/Martin Liberals, but the anti-democratic sell-off of the Canada Wheat Board under Harper which deprived Churchill of sustaining wheat exports.

The tasks seem large, but as with various local labour battles, campaigns like the Fight for $15, and organizations like Iron & Earth, workers are constantly being pulled together in common struggles against common enemies. Methodical, patient and strategic organizing, energetic and creative leadership, and principled positions on a variety of issues, including anti-racism and climate change, are all going to help us turn ourselves around from being on the constant defensive to the first phase of an offensive against employers and government.