How to Repeal and Replace ObamaCare Today? Use Medicare

I have a very simple, even modest, proposal, one that offers us means both of having the cake and of eating it too. Why not, in the very same legislation that repeals ObamaCare, instantly entitle all who lose their insurance coverage under the ACA immediately to enroll in Medicare? The enrollment might be permanent, and at the prices that Medicare currently costs its participants, or it might be simply until such time as a viable replacement for ObamaCare is found . . . 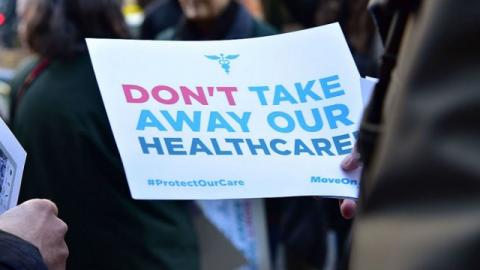 Congressional leaders have said that their first order of business upon reconvening this week is to repeal and, at some point, replace the Affordable Care Act (ACA) — the 2010 legislation that President Obama often is said to regard as his signature achievement.

Donald Trump, the incoming president whom we'll be inaugurating in two weeks, has said this will be his first priority too. So has Mike Pence, the vice president-elect.

Both the congressional leadership and the president-elect face a formidable impediment to achieving their stated aim, however — and I do not mean simply the vows of congressional Democrats to fight to preserve ObamaCare.

The impediment, rather, which the leadership and the president-elect alike have noted, is that as yet there is no agreement on what should replace the ACA. Simply throwing millions of newly insured Americans off of their plans would cause hardship among working Americans on a nearly unprecedented scale. Democrats would scarcely need lift a finger to rescue ObamaCare — millions of furious phone calls from the would-be repealers' constituents would do that for them.

Members of Congress on both sides of the aisle, of course, are aware of all of this. It is why Democrats' pledges to fight are being taken seriously, and it is why would-be Republican and Democrat repealers alike are scrambling to figure out means of "phasing-in" the effects of whatever repealing they do, so as to avoid any sudden insurance calamity or resultant political backlash.

The problem, of course, is that no one is clear about just how to do this.

There seem to be almost as many suggestions as there are legislators. And, what is more, it is hard to retain what most citizens and legislators alike wish to retain — the ACA's popular prohibition on preexisting condition exclusions and allowance for adult children to stay on their parents' plans — without also retaining the unpopular "mandate" that makes those provisions possible.

I have a very simple, even modest, proposal, one that offers us means both of having the cake and of eating it too.

Why not, in the very same legislation that repeals ObamaCare, instantly entitle all who lose their insurance coverage under the ACA immediately to enroll in Medicare?

This proposal is truly modest, not pie in the sky. It is simple, elegant and eminently doable. It should even draw very broad and bipartisan support.

Think about it for a moment: Congressional Republicans are well-known to be eager to repeal the ACA at the earliest possible date; this proposal makes it possible to do so today, in a manner that literally leaves no one worse off, even in the short-term. Those legislators then could take all the time that they need — years, decades if need be — to develop a satisfactory alternative to ObamaCare.

Progressively minded congressional Democrats, for their part, have long wished to try using a single-payer health insurance plan, in virtue of such plans' efficiency, consequently low overhead and potential universality. Trump, for his part, is on record as favoring single-payer approaches to health insurance reform for these same reasons: such plans' efficiency, low overheadand consequently broader coverage potential.

Indeed, this very week the president-elect has tweeted, "It is time for Republicans & Democrats to get together and come up with a healthcare plan that really works — much less expensive & FAR BETTER!"

This is exactly what Medicare already is — much less expensive and far better than any alternative thus far thought up. I can see no better or faster way, then, to repeal ObamaCare quickly and comprehensively without harming anyone than by enrolling current beneficiaries immediately in Medicare, either for good or for as long as it takes to develop something better.

Well, actually, I can see one other possibility that might be as good. That would be immediately to enroll anyone thrown off of ObamaCare in Congress's own health insurance plan.

Robert Hockett is the Edward Cornell Professor of Law and professor of public policy at Cornell University, senior counsel at Westwood Capital, and a fellow of the Century Foundation.

The views expressed by contributors are their own and not the views of The Hill.